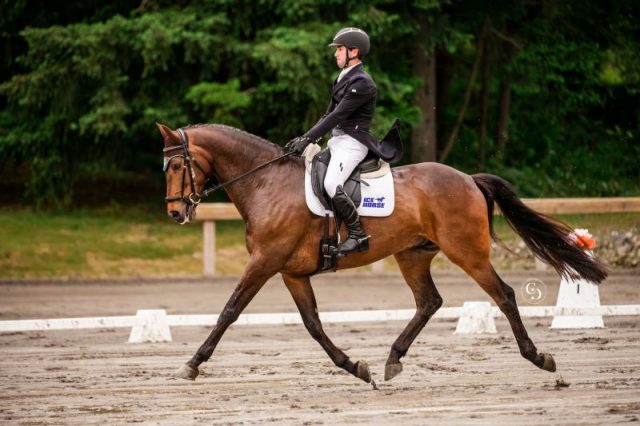 As a rainy dressage day one drew to a close at Aspen Farms Horse Trails in Yelm, WA, Tommy Greengard and his Dutch Warmblood gelding, Joshuay MBF, lead the CCI3*-Short on a score of 27.

“We are thrilled with Josh–he came to the party!” said Greengard, who made the trip to Aspen Farms from California. “He loves coming up here and the change in the weather–it’s been pretty hot at home. He was super happy to play the game and gave us everything he had today.”

Greengard feels confident looking ahead to the CCI3*-Short show jumping on Saturday. “Josh is super reliable,” he said. “My job is to help him get there right and to stay out of his way, and he should be good to go.”

Greengard also leads the Open Preliminary division aboard Leonardo Diterma, owned by Andrea Pfeiffer, two points ahead of Catie Cejka and Victory Gallop, owned by Samantha Arnold, in second. “We’re super proud of him,” Greengard said of Leo. “He just moved up to Preliminary this spring. He has been loving the move up. He was awesome today in the rain.”

Looking to tomorrow’s show jumping, Greengard says, “He’s a phenomenal show jumper–he eats it up. It’s a pleasure to go into the ring with him!”
Amy Haugen and Ebenholtz scored 25.3 to take the lead in Preliminary Rider. They are followed by Reese Blinks and I’M Jaguar in second, and Leonie Padgett and Cooley Precision in third. 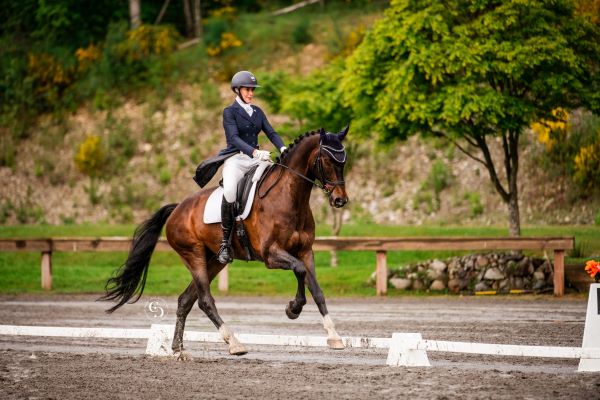 Karen O’Neal and Clooney 14, owned by Annika Asling, lead the CCI2*-Short after dressage on a score of 26.4. They are followed by Harper Padgett and Captivate in second, and Kerry Groot and Borasco in third.

“He was very, very good,” said O’Neal of Clooney. “He listened; he was super obedient; he felt amazing. Sometimes that ring can be spooky, but there was no spooking from him today. The footing held up great in the rain, and he didn’t care about the water.”

O’Neal also secured the overnight lead in the large Beginner Novice Horse division with Escapade, owned by Lauren Smith, on an impressive score of 17.4.
Stephanie Cooper and her gelding Sketchy Past are leading the Open Intermediate on a score of 32.2 ahead of Anna Stein and Zaboomafoo in second.

The low score of the day was earned by Sarah Sullivan and her Hanoverian mare, La Copine. They scored 17.2 in the Training Horse division in the Tack Room Too Arena. In Training Rider, Kaylyn Schaber and Devious Dal claimed the overnight lead on 25.6 followed closely by Audrey Morrissey and Lord Limon on 25.8.

In Open Training, Michelle Grimmer and her 10-year-old OTTB mare, In Private, took the overnight lead on 23.9.

“She was awesome,” said Grimmer. “She was completely rideable the whole time. She’s starting to get more balanced and stronger. She was really soft and supple when I asked her to turn, and straight up the centerlines, and she made it all the way across the diagonal in free walk without lifting her head. I’m looking forward to show jumping tomorrow. She’s starting to get more confident, so I can ride her more forward.”