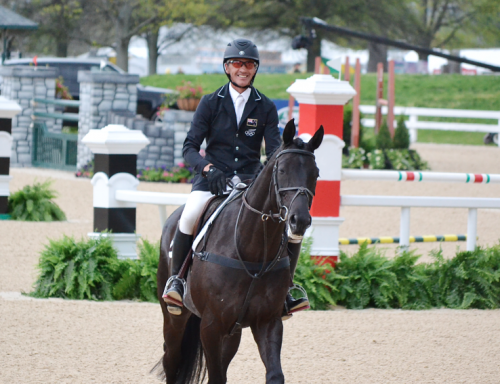 Andrew Nicholson will look to clinch the Rolex Grand Slam this weekend with a win at Badminton after his victory at Rolex, but he'll have to get by William Fox-Pitt first.

I really couldn’t make up a better story line for Badminton if I tried. For starters, Andrew Nicholson won Rolex on four-star rookie Quimbo this past weekend, setting himself up for a crack at the Rolex Grand Slam. William Fox-Pitt is also going for the Grand Slam after being granted a one-year grace period when England saw record rainfall last year, leading to Badminton’s cancellation. But wait, there’s more! As if it weren’t already exciting enough to have two of the world’s best riders facing off in a battle to the death bitter end, current Olympic, World, and European champion Michael Jung will be making his first appearance at Badminton with his unicorn top mount La Biosthetique Sam FBW. This is the stuff Disney movies are made of, people, and I’ll be there to bring you every gritty moment. I thought a full preview on all 123 horses and riders currently entered and on the wait list would be too soul crushing for me to write and you to read, so I decided to give you a brief look at why this year’s Badminton will be one hell of a show.

I know it’s a bit confusing as to how Andrew Nicholson and William Fox-Pitt are both eligible to win the Rolex Grand Slam this weekend. Here’s the deal: William Fox-Pitt won both Burghley in 2011 and Rolex in 2012 with Parklane Hawk, which set him up to go for the Grand Slam at Badminton in 2012. But due to heavy rains turning England into a swamp for much of the spring, Badminton was canceled, and Rolex graciously allowed William’s Grand Slam bid to stretch to this year’s Badminton. Remember that the Rolex Grand Slam is a $350,000 cash prize awarded to a rider who wins Rolex, Badminton, and Burghley in any consecutive order. Pippa Funnell was the first rider in history to win the Grand Slam in 2003, and she’ll remain the only rider in history to win it under the long format. And speaking of history in the making, this is likely the first and only time we will ever see two riders going head to head for eventing’s richest prize.

Andrew’s Grand Slam bid is progressing along a more traditional timeline, as he won Burghley last year with Avebury and Rolex this past weekend with Quimbo. Riders are only allowed to compete at Badminton with two horses, and Andrew hasn’t yet chosen which two of his three entered mounts he’ll ride. He’ll be choosing two from Nereo, his 2012 London Olympics team bronze medal partner who also placed fourth individually; 2012 Burghley winner Avebury; and Mr. Cruise Control, who finished seventh at Pau last year. Slim pickings, eh? Likewise, William has four incredible mounts from which to pick two: Cool Mountain, winner of Rolex in 2010; Parklane Hawk, winner of Rolex in 2012 and Burghley in 2011; Oslo, winner of Pau in 2011; and Lionheart, his team silver medal partner from the London Olympics. Good luck choosing two from those nags, Willy.

William Fox-Pitt joked in the press conference at Rolex that all this Grand Slam hoopla is pointless, as Michael Jung will likely swoop in with Sam and win Badminton anyway. While William’s comments were in jest, we have to consider the very likely possibility that Michael will play spoiler. He comes in to Badminton as the reigning Olympic, World, and European champion with Sam, a horse that only seems to get better with age like a fine wine. Look for Michael to lay down a killer dressage test and head into cross country on Sunday way ahead of the field. To make the Michael story line even more interesting, this is his first appearance at Badminton. If Michael wins, he’ll be just the second rider in history to do so in a Badminton debut, the only other rider being Mark Todd, who won with Southern Comfort in 1980 as a relative unknown at the time. Trivia tidbit: Andrew Nicholson groomed for Toddy at that event.

This is the first major event since London in which we’ll be seeing the top-placing Olympic horses back in action, not to mention the reunion tour of the London Olympic teams. The entire gold-medal winning German team, silver-medal winning British team, and bronze-medal winning New Zealand team sans one rider — Peter Thomsen of Germany — will be out competing at Badminton. As for the most memorable horses from the Olympics, here’s who you’ll be watching on FEI TV this weekend: Michael Jung and Sam, individual gold; Sandra Auffarth and Opgun Louvo, individual bronze; Andrew Nicholson and Nereo, fourth place; Mary King and Imperial Cavalier, fifth place; Kristina Cook and Miners Frolic, sixth place; Aoife Clark and Master Crusoe, seventh place; Zara Phillips and High Kingdom, eighth place; Jock Paget and Clifton Promise, 10th place … need I say more?

Colleen Rutledge and Shiraz are one of three American pairs competing at Badminton this weekend. If she finishes this weekend, Colleen will be the first rider in history to complete five of the world’s six CCI4* events on the same horse. Colleen and Luke have impressively already tackled Rolex and Burghley in 2011 and Luhmuhlen and Pau in 2012 — completing each event without a cross-country jump penalty. While dressage is not Luke’s idea of a good time, he is a freak across the country, which shows in their placings at the CCI4*s they’ve contested. Colleen and Luke finished 12th at Rolex in 2011 — their first CCI4* — and moved all the way up for 73rd to 37th at Burghley that same year thanks to a fabulous cross-country trip. Best of luck to Colleen as she looks to make history.

In addition to Colleen Rutledge, we’ll be seeing Americans Clark Montgomery and Universe and Tiana Coudray and Ringwood Magister compete at Badminton, as well as Canadian Rebecca Howard and Riddle Master. This is Clark’s first CCI4* since setting up his UK base with Jess in Wiltshire, England, and Buzz has had an excellent spring prep for his first four-star, most recently finishing seventh in the CIC3* at Belton Park. This will be Tiana and Finn’s first major outing since the Olympics last year; they most recently finished 30th in the Belton Park CIC3*. Rebecca and Rupert will also be making their first big appearance since the Olympics. They most recently finished sixth at the Fontainebleau CIC3*. I’ll be checking in with our North American contingent as soon as I arrive on the Badminton grounds Thursday morning.

So, all of that is to say that this is going to be one hell of a weekend, and you are not going to want to miss one minute of the action. Visionaire will be bringing you a post shortly about how to watch all the action live on FEI TV. In the meantime, be sure to check out the Badminton website, full schedule, and entry list. And be sure to check in to EN all weekend for live coverage, photos, and interviews from Badminton. Go eventing.