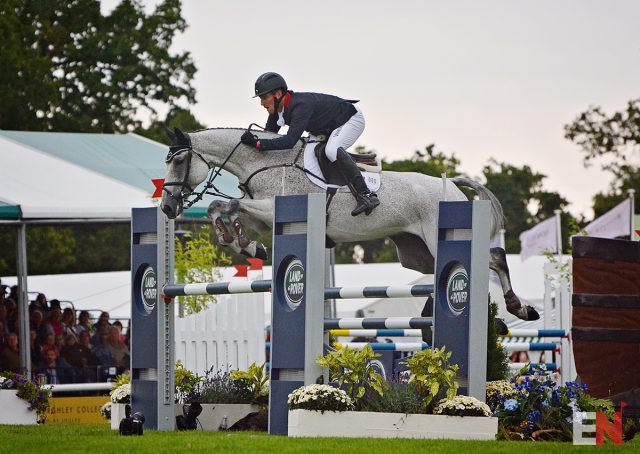 Oliver Townend woke up this morning with the knowledge that he had jumped only one clear show jumping round in his last 15 runs at CCI4* level. Or maybe he didn’t realize that, but without a rail in hand aboard overnight leader and four-star first-timer Ballaghmor Class, Oliver knew he had to jump clear to claim his second Burghley title.

Then Gemma Tattersall and Arctic Soul, who sat in second place after cross country, knocked a pole at the Rolex Grand Slam vertical to give Oliver a rail in hand, and 6.9 penalties of breathing room over Piggy French and Vanir Kamira, who continued rapidly climbing the leaderboard thanks to their clear round inside the time.

The entire crowd gasped when Oliver and Ballaghmor Class took out the top portion of the gate at fence 5. With 10 fences still to jump on Richard Jeffery’s course, they could not afford another rail.

With the pressure on, Oliver kept his cool and Ballaghmor Class jumped his heart out to leave the remaining poles in the cups and win Burghley. The 10-year-old Irish Sport Horse gelding (Courage X Kilderry Place) owned by Karyn Shuter, Angela Hislop and Val Ryan, added one rail and 1 show jumping penalty to his dressage score to complete on 45.6. 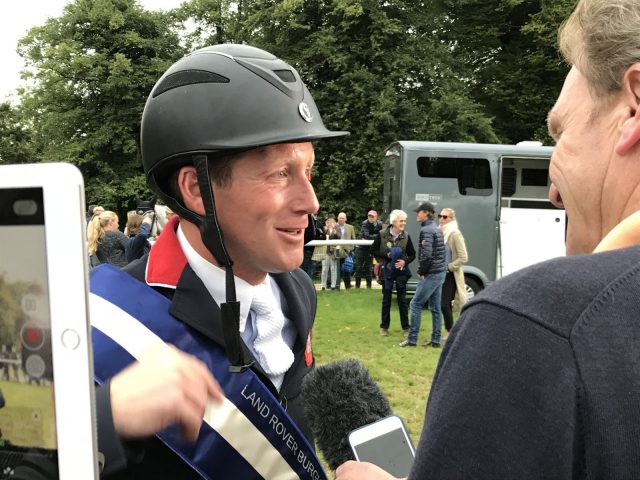 Oliver has now won Burghley twice, with his first victory coming in 2009 aboard Carousel Quest, and he could not hold back the tears as it sunk in that he once again won the biggest four-star in the world on a horse he always believed could do it.

“We’ve had him from the word go, and he’s a top class horse,” Oliver said. “It was up to him to do his job and up to me to do my job, and we both did. I was looking around the collecting ring and I thought, whatever happens, I wouldn’t swap him for any horse in here, and it’s been a long time since I last said that.

Finishing second was definitely an emotional outcome for Piggy French, who considered giving up riding when she had her first child last year. She jumped one of the five clear rounds inside the time with Trevor Dickens’ Vanir Kamira, a 12-year-old Irish Sport Horse mare (Camiro de Haar Z X Fair Caledonian) to complete on 46.9.

“It’s amazing the difference a year makes,” Piggy said with tears in her eyes. “It’s amazing to be here and up the leaderboard. I don’t think it was that pretty but it doesn’t matter, the poles stayed up. These are really brave horses and to get them to respect the poles is a mission in itself.”

Gemma Tattersall battled a terrible chest infection all week, and despite the rail down she still secured the best Burghley result of her career, adding one rail to her dressage score to finish third on 47.0 with Arctic Soul, a 14-year-old Thoroughbred gelding (Luso X Dream Cocktail) owned by the Soul Syndicate.

Brits swept the top of the leaderboard on home soil, with Tom McEwen and Toledo de Kerser, a 10-year-old Selle Francais gelding (Diamant de Semilly X Ariane du Prieure I), jumping their 17th clear international show jumping round to finish fourth on their dressage score 49.1. Tina Cook and Star Witness, a 12-year-old Irish Sport Horse gelding (Witness Box xx X Drive On Rose), were the only other combination to finish on their dressage score to place seventh on 53.2. 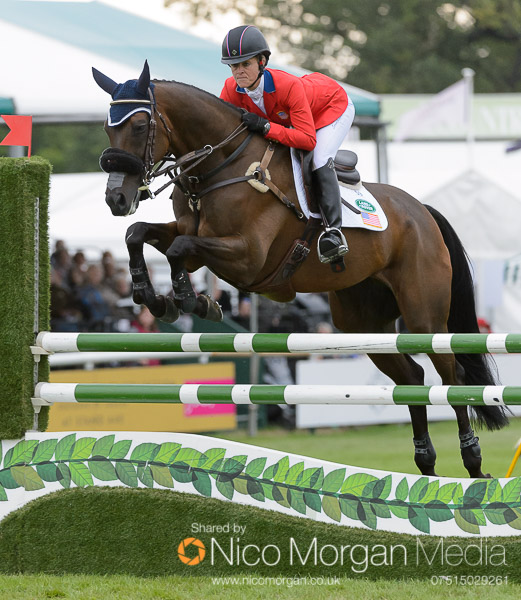 Lynn Symansky and the Donner Syndicate’s Donner, a 14-year-old Thoroughbred gelding (Gorky Park X Smart Jane) had one rail down to finish in sixth place on 53.1, finishing as the highest-placed American combination and improving on their Burghley result of 14th from last year.

“You need to ride according to the plan of your own horse and have a cool head about it,” Lynn said. “I’m much more relaxed this year, having done it last year, and I’d love to come back. You have to rely on the partnership. When you can taste it, it’s pretty disappointing, but I can’t be upset — I’m really pleased with him.” 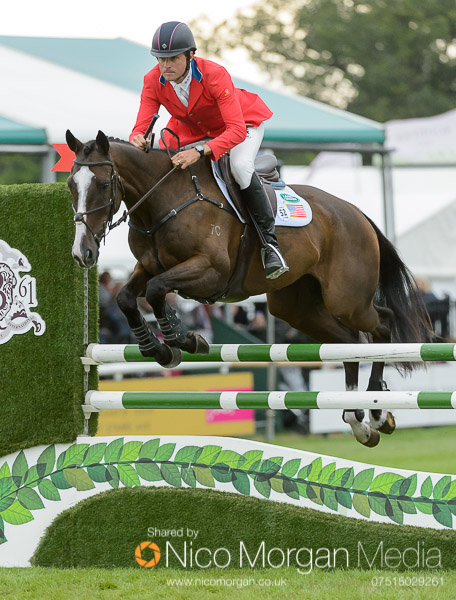 Boyd Martin and Steady Eddie, a 14-year-old New Zealand Thoroughbred gelding (Jetball X Tudnela) owned by George and Gretchen Wintersteen and Denise Lahey and Pierre Colin, had two rails down to finish 10th on 48.0. Boyd has now finished in the top 10 in both of his appearances at Burghley.

“He had the last fence down, which was a bugger, but to finish in the top 10 is a great achievement and I’m really proud of him,” Boyd said. “He was a bit all over the place in there — yesterday really took it out of him, but it’s a great result. This is by far the biggest, toughest four star in the world — it takes a special type of horse and a brave rider.” 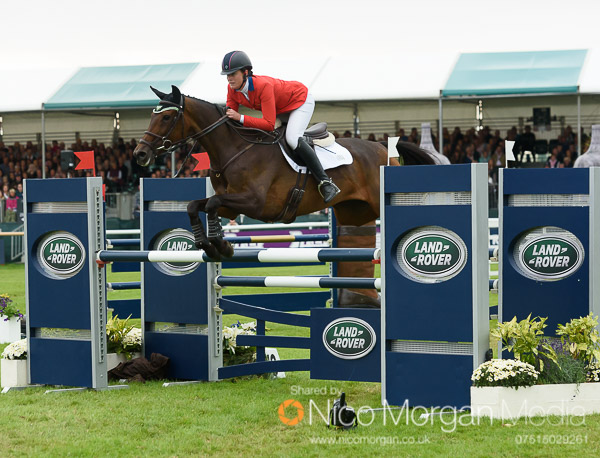 Lauren Kieffer and Team Rebecca’s Veronica, a15-year-old KWPN mare (Pacific X Kimbel, by Ferro), jumped clear with 1 time penalty — one of the six total clear show jumping rounds — to finish 12th on 66.0 in their Burghley debut and take home a miniature version of the Land Rover Perpetual Challenge Trophy as the best first-timers.

“It was a fair course if you rode well — it caught out little mistakes but there was nothing unfair about it,” Lauren said. “The plan would have been to win, but you know, it’s all gone to plan otherwise. Burghley really tells you about what type of horse you’ve got — you just don’t know until you get here.” 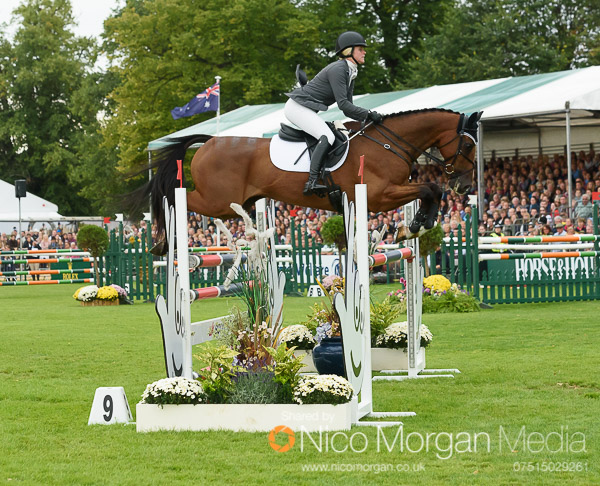 Mackenna Shea and Landioso, her own 15-year-old Bavarian Warmblood gelding (Legendaer I X Aspen), were the first in the ring to jump in the top 25. One rail down and 4 time penalties saw them finish 24th on 96.1. All four American combinations that completed Burghley finished in the top 25.

“I’m just so happy I finished – that’s pretty much it!” Mackenna said. “He was so good and so rideable, which I was happy about, because sometimes he can be a bit feisty, but it backed him off a bit. Maybe that’s the trick – Burghley! I don’t know if I’ll ever really believe it happened – it’s all gone so smoothly and he felt so good that I don’t know if it really happened.”

Tilly Berendt once again stationed herself in the mixed zone to bring you quotes from the riders. Click here to read more comments from Team USA, the top finishers and beyond.

That’s a wrap on EN’s coverage of Burghley! If you missed any of our coverage, click here to catch up, and be sure to check Instagram for bonus photos. Many, many thanks go to Nico Morgan for providing beautiful photos. You can view many more images from Burghley in the photo galleries on his website. Go Eventing.