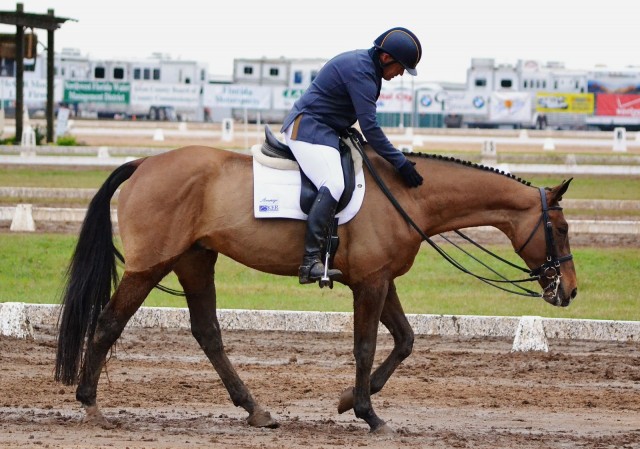 Ballynoe Castle is continuing his comeback this weekend at Red Hills with an easy romp in the Open Intermediate division. He did his dressage this morning, looking very matter of fact about whole ordeal and seeming to wonder what all the fuss is about. He scored 25.0 to lead the division. Caroline Martin said Reggie has been absolutely perfect during his rehab after bumping his leg on a water pipe in his stall, which resulted in a bone bruise on his right stifle. That little injury was severe enough to keep Reggie from representing Team USA at Aachen, and Buck has brought him back very slowly as a precaution.

Reggie competed for the first time since Rolex at Rocking Horse Winter I in January, finishing in third place on his dressage score of 29.6 in Open Intermediate. He then took a short break from competing to prepare for his role in super groom Kathleen Blauth’s wedding. Buck said he’ll see how this weekend goes and how the cross-country course dries out tomorrow. But if all goes well, he’s hoping to get Reggie to Kentucky, which would be his third appearance at Rolex. Many thanks to Buck, Kathleen and Carl Segal — who is here with Cassie this weekend — for taking time to chat after dressage. Go Reggie, and Go Eventing.