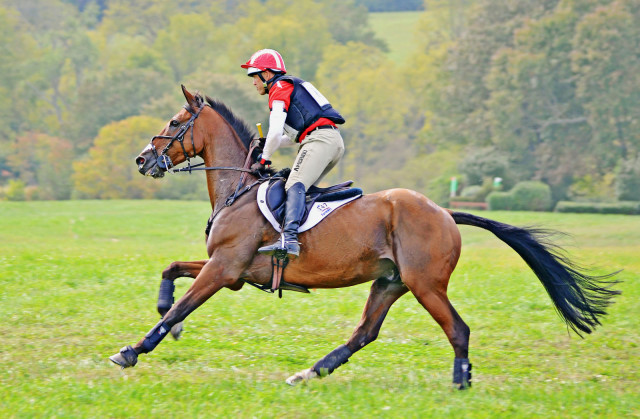 Congratulations are in order for Carl and Cassie Segal’s Ballynoe Castle RM, who will be honored Saturday night at the USEA’s Annual Meeting and Convention awards banquet as the new U.S. Highest Scoring Horse of All Time.

And Reggie will almost certainly continue to widen that leading margin, as the 14-year-old Irish Sport Horse gelding by Ramiro B isn’t ready to hang up his shoes just yet. So what does the future hold for Reggie, and how does his story end?

“The only thing that matters to me at the end of the story is that he is as healthy, happy and sound as he is today so that he can keep giving people joy — not by competing, but just being him,” his longtime partner Buck Davidson said.

Reggie has been competing at the Advanced level for six years now, and Buck said his 2015 season will start in the exact same way it has since 2008: “We’ll take him to Rocking Horse and see how he goes.”

As Buck put it, “there’s way more in the rearview mirror than the front windshield. There are absolutely no competitive goals for him at this point. He’ll tell us what he wants to do. Of course, you’d like to win Kentucky, but anything he does for us on the competitive field at this point is just a bonus.”

Indeed, Reggie has little to prove at this point. His FEI record is peppered with notable placings: 11th at Burghley in 2009, finishing just outside the top 20 at Badminton in 2011, 2nd at Rebecca Farm CIC3* that same year, twice 3rd at Plantation Field CIC3* and two top-four finishes at Rolex Kentucky.

“The thing that Carl and I are most proud of is not how many total points he has, but the consistency of his career,” Buck said. “If you look at that, it’s nearly 200 points for seven years in a row — that doesn’t happen. That’s the most impressive thing for me.”

Though Buck isn’t making any definitive goals for Reggie’s 2015 season just yet, he does have one very important competition on his schedule: serving as a leadline mount for super groom Kathleen Blauth-Murray’s daughters Riley, 4,  and Cara, 3.

“That’s one thing we haven’t won yet — a leadline class. Riley comes over with Kathleen just about every day, and she comes running into the barn,” Buck said. “She’s shy with me for a few minutes, and then she grabs my hand and we go out to see Reggie. Sometimes we brush him, and sometimes we give him a bath.”

Indeed, Reggie doesn’t exactly fit the mold of a typical four-star horse. Kathleen rode him down the aisle at her wedding earlier this year — flowers intricately braided into his mane — and now he’s preparing to make his debut as a leadline mount, with Buck leading him in the class, of course.