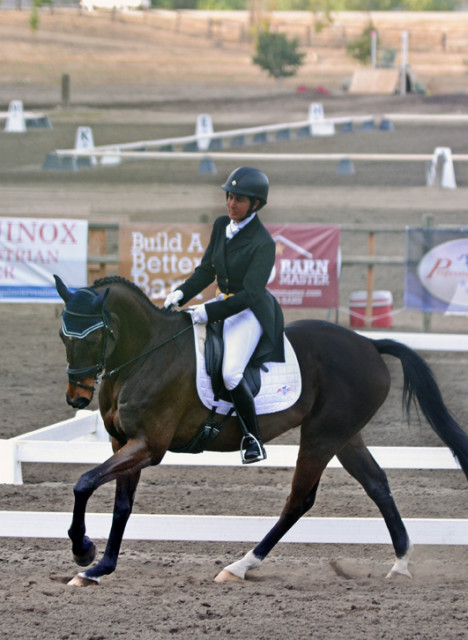 Welcome back to Ramona, California, where Area VI is wrapping up their spring FEI season at Copper Meadows. It’s Friday out west, which means it’s a beautiful day for dressage! The atmosphere at Copper is warm and very eventing family friendly, which is a great combination for young horses, seasoned veterans, move ups, confidence builders and just plain fun. Copper is running everything from the CIC 3* to Intro this weekend, which means there’s something for everyone! But now, on to the dressage.

Barb Crabo and Eveready were predicted to win this weekend by our numbers expert, Maggie Deatrick, and once again she is proving the numbers matter! With a lovely test breaking the 50 mark with a score of 47.7, Barb and Ready have room to make mistakes and still take home the win. That isn’t in their game plan though, and you can expect them to finish strong.

A big welcome back to the West Coast to Avery Klunick! She’s been competing out east, coming in second at Chattahoochee Hills last month in their CI 3* and winning the Open Intermediate division at Texas Rose. This 15-year-old gelding has been out only three times this spring but has placed in the top 10 each time. Avery and Winston are certainly making the most of their Rebecca Farm prep with a strong outing on the flat, scoring 54.8 to sit in second.

Andrea Baxter and her mare, Indy 500, are always strong competitors in the three-star divisions out west, and today proved nothing else. Remember that this mare loves to jump, and we might see them end on their dressage score of 60.7, which currently has them in third place. They are certainly capable of moving up the leaderboard.

Jolie Wenworth is riding Maddy Mazzola’s Mojito this weekend. Mojito can be a tough horse in the sandbox and has had trouble coping with the atmosphere at shows this year. Unfortunately, it looks as if Mojito had difficulty settling today as well. 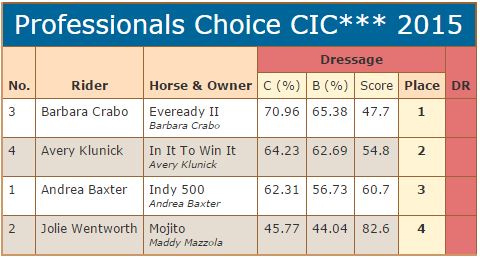 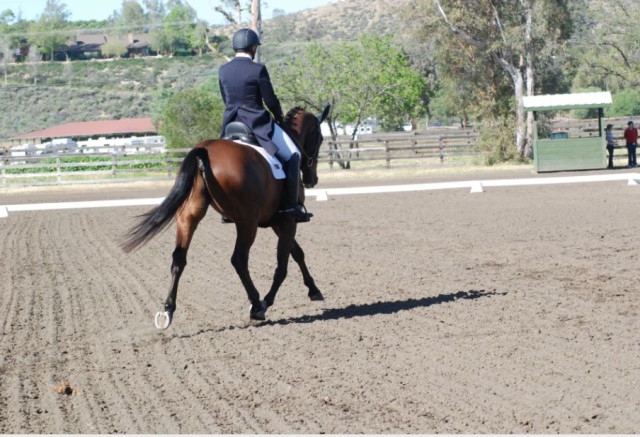 Amber Levine had a great day in the CIC2* sandbox with two excellent rides. Amber is currently sitting in first on 48.6 with Valorie Mackey and her own Guiness St. James. The 10-year-old bay Irish Sport Horse is contesting his first two-star and doesn’t seem to be bothered by the change in difficulty — at least in dressage! They were the only pair to break the 50 threshold in the division.

Jolie Wentworth and Kate Miller’s Gordon Biersch stepped up to their second attempt at the two-star level in fine style, bettering their best dressage score by 1.9 points to score 50.0. The charming chestnut Thoroughbred has had a spotty record this spring, but at 10 years old, he’s primed to step out and make a statement.

In third on a score of 52.2 are Lauren Billys and Marseille, the lovely 15-year-old Belgian Warmblood Lauren recently acquired. Lauren competed at Woodside in May to win the Open Preliminary division, and it looks like this will be an exciting pair to watch in the future.

Amber Levine and her own Carry On sit fourth on 53.0 in the tight top rankings. The bay Dutch Warmblood is only 8 and is improving with every outing. Amber has produced this horse from the Novice level, starting their partnership together in 2012.

Rounding out our top five are Heather Morris and Charlie Tango on a score of 53.6. We’ve gotten used to seeing these two at the top of the standings, and Chuck’s careful jumping is sure to put pressure on the pairs sitting ahead. The 7-year-old Irish Sport Horse gelding and Heather won their most recent outing at the CIC2* at Twin Rivers in April. 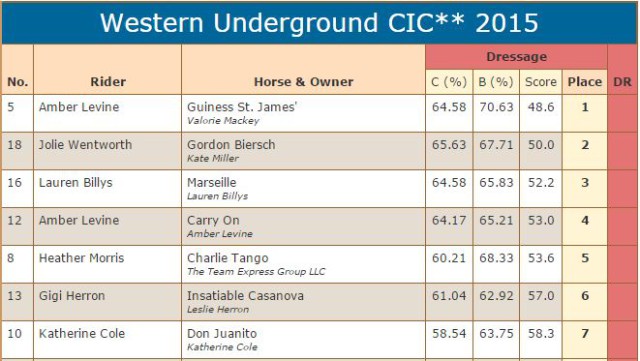 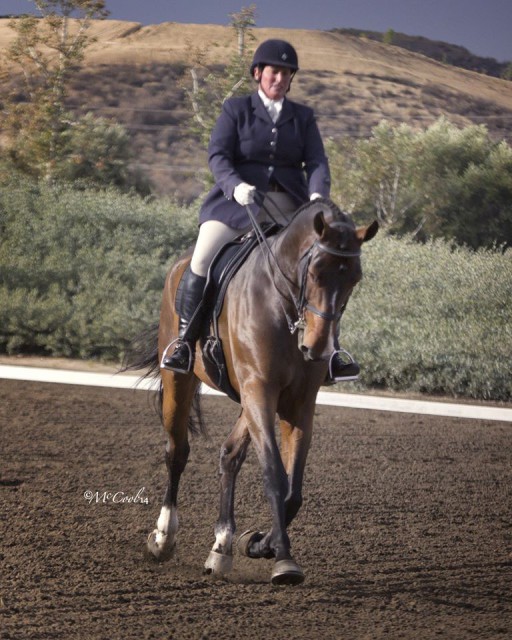 Barb Crabo and her own Over Easy have been working their way back up the levels after some difficulty in 2013, but Maggie has predicted them to win. Sure enough, the Swedish Warmblood mare performed beautifully today and is leading the division on 33.8.

Ashlynn Meuchel, a member of Area VI’s 2013 Young Rider team, and Sarah Broussard’s Morning Star scored 39.3 to sit in second. Last fall the pair won Advanced at Woodside in October and recently came in sixth at Twin River’s April CCI2*— definitely a pair to watch for the future.

Erin Murphy and Athlone Travel On stepped up to the two-star level this spring and have done quite well for themselves. The skewbald gelding came from Great Britain, where Julie Tew rode him in his first FEI competition. They are a fun pair to watch — it’s always nice to see a little color at the higher levels! They’re sitting in third on 40.9.

Washington-based Kevin Baumgardner and Wembley are another pair we’d like to welcome back to the West Coast! After successfully completing the CIC2* at The Fork and the CCI2*, Jersey Fresh — where they came in 20th out of 40 — the pair have returned to Copper Meadows for their first go at Advanced, scoring 41.5 for fourth place.

Sarah Braun, 2014 USEA Groom of the Year, and her own Perfect Intentions are also contesting their first Advanced this weekend. Sarah almost lost “Candy” last year due to colic, but they’re back in the game this year thanks to a huge rallying of the West Coast eventing community, the doctors at San Luis Rey, Sarah’s indomitable spirit and Candy’s own refusual to give up. This mare has a fiery spirit and loves to jump, so it’s nice to see them perform so well in the dressage, scoring 43.7 for fifth place. I’m sure Candy’s eye was on the cross country course the entire time!

Gina Economou and Calidore, also known as Leo — a big bay gelding with a personality to match — recently won the Open Intermediate at Galway Downs. While their dressage wasn’t their best today, this horse has the scope to jump Mars, and they are well positioned to move up the leaderboard.

With a new course designer for the West Coast in Hugh Lachore, it’s possible there will be some major shake ups as we look ahead to cross country. Stay tuned for much more from Copper Meadows! Go #copperstrong.

Update! Update!: In wonderful fashion, after some concerns from the riders were voiced, Copper’s fantastic event organizers took their concerns into consideration. Currently, riders and volunteers and event staff alike are moving the show jumping ring. Subsequently, the timing of the CIC 2*, 3* and Advanced divisions will be starting stadium at 7 am Pacific, and will complete XC that afternoon. 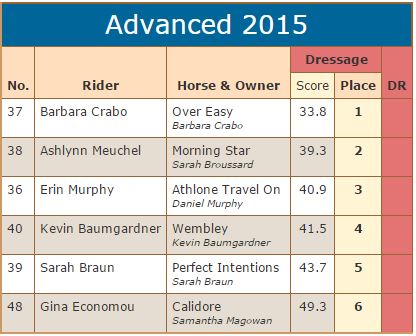