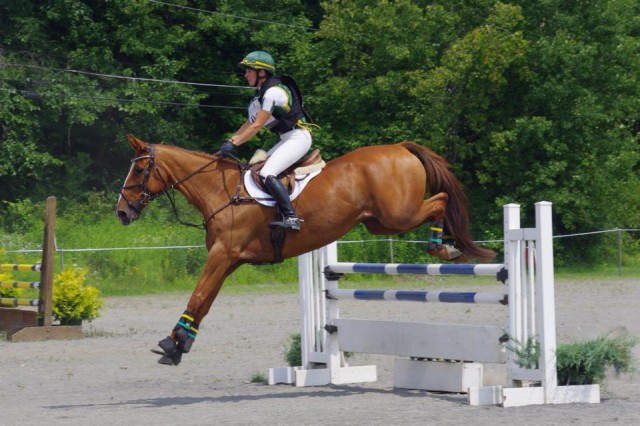 Vinnie at Stoneleigh-Burnham in Prelim B. Photo by Denny Emerson.

As far back as I can remember, eventing simply revolved around memorizing one’s dressage test and jumping all things on both the cross country course and within the confines of the show jump ring. No more and no less. Ribbons were always anxiously waited for, and falling off, even though not desirable, seemed like a fairly common occurrence. I’m specifically referring to my eventing career, if that’s what you’d call it, PDEE, or Pre-Denny-Emerson-Era.

There was no seeing of the distance. There was certainly no concept of a “jumping position,” or what one might look like over the top of any given fence. There was definitely no sense of what one might want to feel in their horses canter on the way to a jump, and there was absolutely no further thought process or decision making skills going on. No wonder I fell off and was eliminated so frequently! I suppose ignorance is bliss, am I right?

So there I am on Sunday in Greenfield, Massachusetts, getting ready to go Prelim at Stoneleigh-Burnham on my main squeeze these days, Vinnie. We arrived mid-morning, overcast weather looming nearby and a thick layer of heat plastering us down. We set out to walk our course, and everything looked quite doable, though perhaps more technical of a course than my limited experience at this level had prepared me for.

I figured with Vinnie’s expertise, and my growing confidence, we would be able to tackle this course as a team, no problem. This feeling has started to become the norm since taking over the ride on this once-in-a-lifetime horse, a feeling that at one time seemed totally foreign to me.

I headed over to the indoor for dressage, and Vinnie was feeling totally with me. My last few schools on the flat had been less than desirable, so to feel all our mistakes, bad habits and incorrect instincts fly out the door just at the most opportune time was a lovely surprise.

Of course, I did not give myself quite as much warm up as I would have liked. Normally I give us about 20 minutes of actual warm-up time, excluding any warm-up walk time, but when I arrived in the mini indoor before heading into the ring, I realized there were only two riders, then me! We pulled off a decent test and headed back to the trailer.

Show jumping went exactly as planned. I probably struggle the most in show jumping with this particular horse, so nailing this round meant a lot to me. It’s not just about leaving the rails up in my world, it’s about looking like I belong, making good decisions, not getting in Vinnie’s way and staying totally in tuned with his canter. I can honestly say I would not change a thing about our round. He was amazing, and we are more in sync every time I compete him, which is the most amazing feeling.

Cross country was immediately after show jumping, so fortunately there wasn’t a tremendous amount of time to get nervous and feel the butterflies land in my stomach. This is where the magic happens. Vinnie is absolutely one cool dude on cross country. He knows his job. He looks for his next fence. He has the most earnest expression on his face, with his ears always perked forward. He leaves the box catapulting with energy and and then settles into a nice rhythm as fence one. 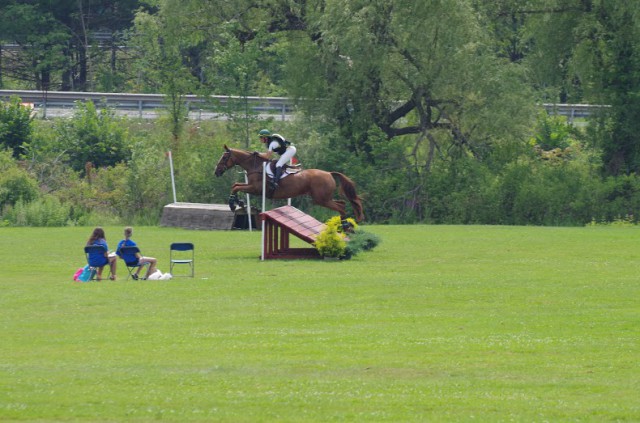 Preliminary is a new level for me. Vinnie and I have completed six Prelim events together, which is thrilling in itself! Each outing has been educational in more ways than I can count. I either learn something new about Vinnie on course or realize something about myself. Stoneleigh was really exciting for me as a rider because I realized how much I am part of the equation now. I had to make quick, but thoughtful decisions in the heat of the moment.

For instance, the first water was a palisade, six or seven strides to a feeder table in the water. I cant quite recall the distance, as they moved the first jump back a stride or two after I walked it. Both jumps were smooth, though somewhere after the fence in the water, all I knew was that I found myself hanging on Vinnie’s side about to fall off after he tripped somewhere.

Luckily, this horse is super quiet and conservative and felt me doing nothing in the saddle but dangling like a monkey from a tree branch, so he stopped, put his head up, and I shimmied my way back into the tack and away we went!

Several other times on course, I had a couple plans coming to certain combinations. I had decided if we come into X line with X kind of energy and he seems bold and ready, I’ll do X number of strides, but if plan A fails, I’ll be ready to sit up and add another stride.

A few combinations I thought my Plan A would go into effect, but in actuality, Vin had a better plan, and I was right there with him. What an amazing feeling to be a part of the conversation and not just randomly galloping your horse towards a jump, like we see so often on cross country. Obviously not ever rider does this, though there are countless individuals who simply go from one side to the other and that’s about it — no finesse, no thought process, no in the moment or last minute decisions.

Even though I am riding a former CCI2* horse does not mean I am along for the ride and enjoying every second of Vinnie packing my butt around every course. This could not be further from the truth. He is one outstanding horse but requires a great deal of riding and took me well over a year to figure out the ride.

I am still perfecting the ride and learning more every time I ride him. I do not wish to be a passenger. I do not wish to let the horse make every single decision required on cross country. I want to be a part of the conversation. I want there to be a dialogue throughout the course. I want to check in with my partner and for him to know I am there for him, and that he is there for me.

I came off cross country feeling more emotions than ever before. Pure joy? YES. Total high adrenaline? DEFINITELY. Shocked from almost eating it halfway around the course? YUP. Most of all I felt overwhelmed by how far I have come as a rider and what this horse has allowed me to do.

He has offered me confidence. He puts my mind at ease. He picks up the pieces when I misjudge a distance or combination. He allows me to make decisions as long as I am fair and don’t put him in harm’s way. He is kind, and he is a teacher. His mellow, yet innocent expressions make me smile. I am allowed to make mistakes, though I am never allowed to take him for granted. He is the best thing that has ever happened to me, and I owe this horse more than he’ll ever understand. Till next time!