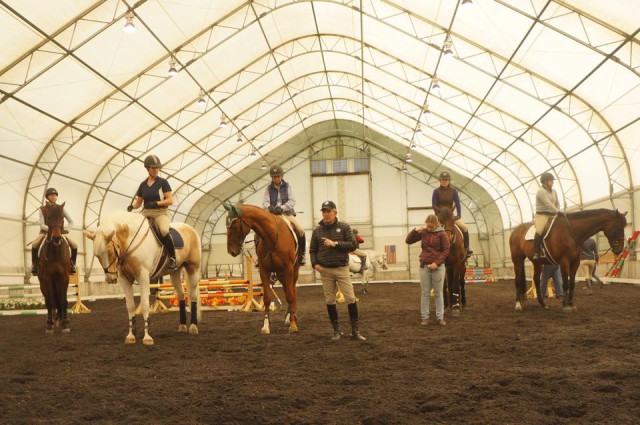 Springtime resolutions to improve riding were helped along in the St. Louis area by Sarah Monfort’s Fat Possum Farm bringing the legendary Bernie Traurig to the Midwest for a two day clinic April 2 and 3, 2016.

Traurig’s website, EquestrianCoach.com, is an incredibly valuable resource for the global horse community, offering instructive videos and videos of unique historical value, too.

But the man himself right here in Missouri was much better! Bernie has so much to offer, it is difficult to compress into a weekend, and he did mention that there were things he could not accomplish in two days. But what he did accomplish was amazing.

There were four groups, ranging from 3’6” to 2’6”. Bernie is a consummate horseman, a term too common to do him justice. He is a direct link to the history of modern Olympic Equestrian sport, having ridden himself with Vladimir Littauer, and Bert DeNemethy. He is one of the only people to have ridden at the Olympic level in all three disciplines: showjumping, eventing, and dressage.

And, of course, he was one of the very best hunter riders during the heyday of the big hunters, riding many of the most famous horses in the sport. It was hard to believe that someone who won the Medal and Maclay classes in 1961 could be right here teaching us, and looking as youthful and energetic as ever. Bernie is timeless, and we were so lucky to have two days to learn from him.

This was a clinic on the Forward Riding System (not dressage) and there were basically tjree parts: Position, which must be as correct as possible — function follows form in riding; Aids, which must be correctly applied; and Schooling Techniques. 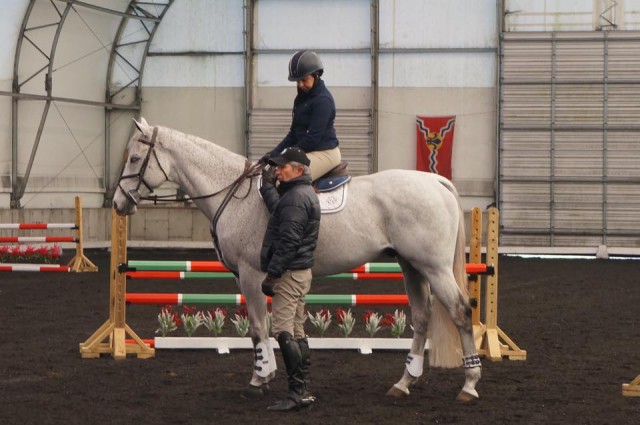 There had been a cancellation in the 3’6” group and one of our area’s top eventer, Jana Lyle Ellerbusch with her Prelim horse, Tupelo, joined that group on Sunday after auditing on Saturday. Hunters and Jumpers rode together, and exercises were adapted for each individual.

He was also interested to learn about the horses, and was always happy to find Thoroughbreds in the groups. Bernie is a fan of Thoroughbreds, as he rode so many good ones in the past, and he is a supporter of the Retired Racehorse Project, which hosts the Thoroughbred Makeover at The Kentucky Horse Park in October, with Bernie as a judge and advisor.

Day 1 focused on impulsion, transitions, and rein aids. Cavaletti were used, and things progressed quickly through warmup to incorporating obstacles. Jumps were never high, but riders at every level were challenged to do things correctly.

Each group on Saturday started with a lesson at the walk. Riders were asked to walk either on a long rein or with a light contact making sure the arms followed the movement of the horse’s neck and mouth with horses marching forward at the walk, not ambling along aimlessly. When work began at the trot, position basics were reviewed while riders were asked to do rising trot, lengthened trot, sitting trot, and some trot without stirrups.

Emphasis was made to staying toward the front of the saddle rather than sitting heavily at the back of the saddle. Riders were asked to ride with wider hands so that they could funnel their horse’s energy from the back end to the front end. Horses that began getting heavy in front, or were over flexing, were instructed to give a quick little “flick” with the rein then immediately soften.

When work began at the canter riders were reminded of the four different seats available to them: 1) two-point, 2) a soft seat that comes from allowing the two-point to lower towards the saddle, but is not sitting in the saddle, 3) a full seat and 4) a driving seat.

Riders concentrated on the first two seats and were again reminded that the arms needed to follow the horse’s mouth and that in the 2 point riders needed to stretch themselves up into the two point from their lowered heels. Riders were asked lengthen and shorten the canter stride to make sure horses were moving off of the leg as soon as they were asked.

On the first day of jumping, the jumps were kept very low. Riders started out by trotting over cavelletti that were set to the lowest placing. There were 3 caveletti that were set at three canter strides between each. The greener riders/horses were asked to trot the first cavelletti in its center, turn horse to the outside of the second cavelletti, then back to middle of third cavelletti. 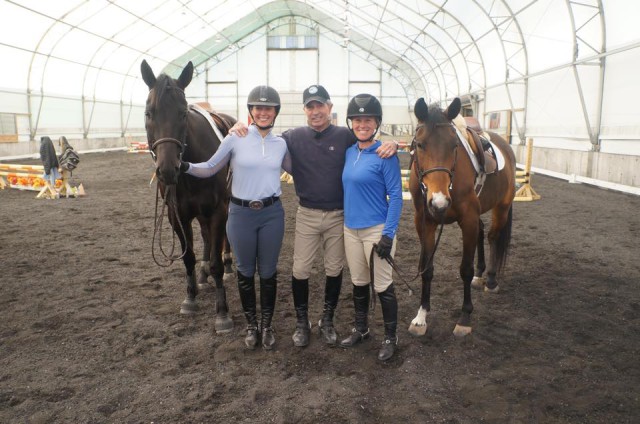 On Saturday evening, participants were invited to a Q&A with Bernie and a showing of his video tribute to great Thoroughbreds of the past, which debuted last October at The Makeover.

This video can be watched for free on equestriancoach.com and is worth a look. I think it is good to know the history of our sport, and entertaining, too!

Day two showed us all just how great a teacher Bernie Traurig really is. Every group did course work appropriate to them and their horses, and without exception, every horse and rider combination was dramatically improved over the first day.

When problems were encountered, they were dealt with so well! One unfortunate young rider on a new mount fell off twice in front of the audience, and was reassured through her tears and embarrassment, that he himself had seen the dirt more often than he could remember.

She was compassionately coached back through the exercise that had been difficult, and by the end of the day she was riding better than ever.

To develop the rider’s eye, riders and auditors were encouraged to go home and put out ground poles and/or cavelletti all over your arena and practice every day cantering over the poles in the 2 point and soft seat until you can always find that distance that is approximately 6’ in front of the pole.

Practicing in this manner allows riders to practice this exercise as long as needed without inflicting concussion on the horse’s legs. Riders were also encouraged to practice rising out of the saddle by pushing up through the heel and not pushing off of the stirrup and being elastic in the arms.

Riders were reminded that in order to jump your horse had to do 4 things: stop, go immediately forward with a light leg aid, turn right and turn left.

Riders that did not have a flying change were asked to trot within 4 strides of landing and then picking up the new lead. Mr. Traurig told riders that in his experience it was harder to teach a flying change to a horse that learns it is all right to change in front only.

For riders struggling to keep the weight in their heel when they needed to stop or hold, they were asked to show the bottom of their boots to Mr. Traurig.

This analogy allowed riders to brace their leg a little when they needed to in the correct position rather than having the rider’s leg get pulled back, thus putting it on the horse, when riders got pulled forward by their horse when they tried to stop.

I had actually done a clinic with Bernie before (16 years ago, before some of my fellow participants were born), and he continues to get better every year. If ever an opportunity to school with this master horseman presents itself, do it!