I write a lot ABOUT the infamous “horse show husband,” but the world rarely gets his perspective. Naturally silent, Wayne happily plods along and nods his head as I blabber on endlessly about all things horses for hours on end. I finally decided it was time for the world to hear (or read, rather) his voice and to place some shame on me for once. So I handed him a notebook and pen and asked him to write down the ten scariest things I have ever said to him and rank them in order from kind of scary to downright terrifying — and he has spoken!

Wayne’s thoughts, “They always look the same and I feel like I am in some kind of trap.” 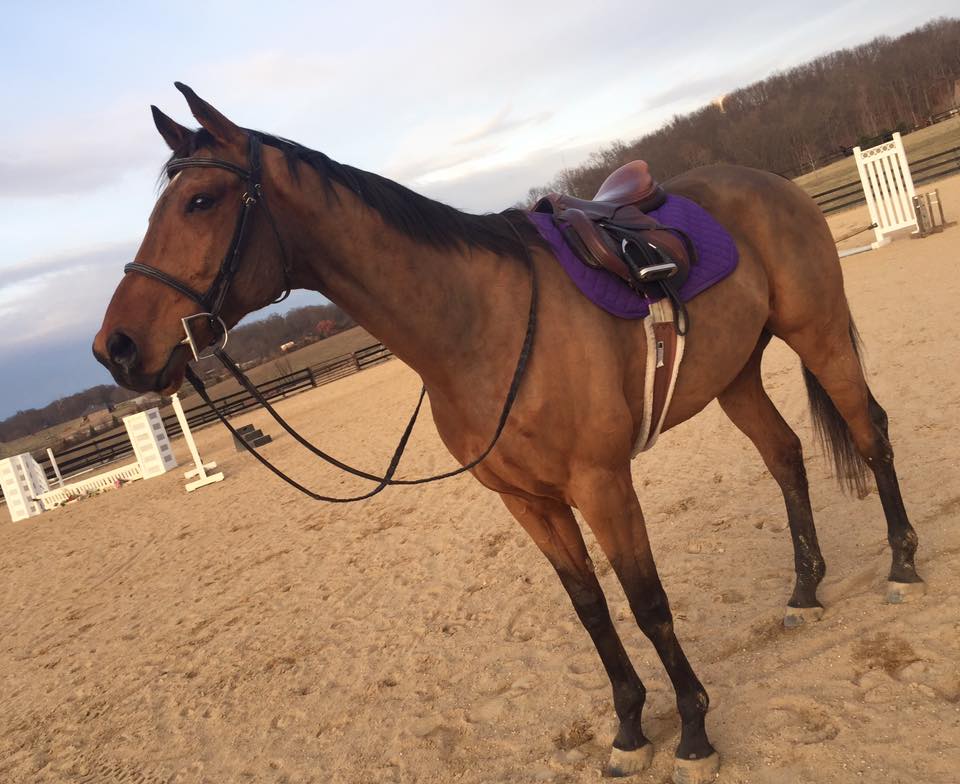 But….I swear each photo of him gets cuter and cuter! Photo by Meagan DeLisle

Wayne’s thoughts, “The barn is an hour away. There is no such thing as a ‘quick trip’ to the barn and we are going to drive up there, brush Joey, feed him a treat, take some photos, and drive home. Almost a whole day… gone.”

Wayne’s thoughts, “Your job is salary, has great benefits, and pays for all of the horse expenses. How the heck are we supposed to make that work?”

7. “Do you think we can set aside some extra money for the horse show next month? I miscalculated.”

Wayne’s thoughts, “Of course you did.” 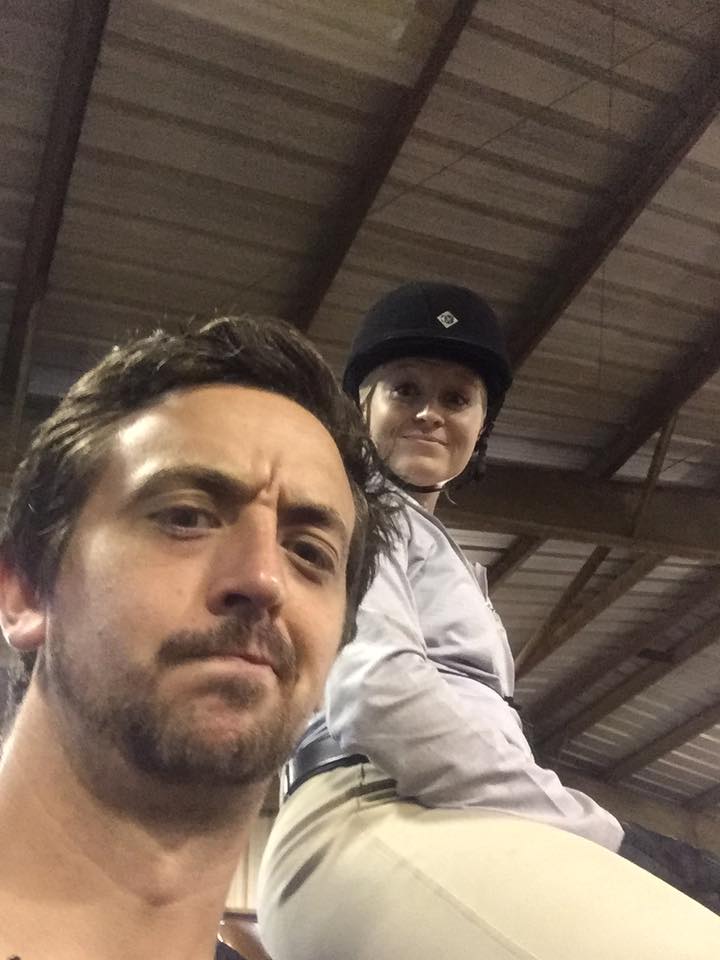 You can tell by Wayne’s face in this horse show selfie that he is absolutely THRILLED about me refusing to tell him where the Show Office is so he won’t preemptively look at the bill….Photo by Wayne DeLisle

6. “I hate being so far away from Joey, what are the odds of us building a barn on the farm one day?”

Wayne’s thoughts, “You mean the farm that makes us money because we can plant soybeans on it?”

5. “If we did bring him home, he would need a friend. They are herd animals, ya know!”

Wayne’s thoughts, “Sounds like an excuse to get a 2nd horse to me…

4. “Joey needs a blanket, he’s cold. Joey needs his feet done, his toes look awful long. Joey needs more supplements. Joey needs an ‘ovaltine’ pad for his back” (when Wayne was writing these he LEGIT wrote ovaltine instead of Ogivly. I. Am. Dying.).

Wayne’s thoughts, “How did these things survive back when the Indians were the only ones around?” 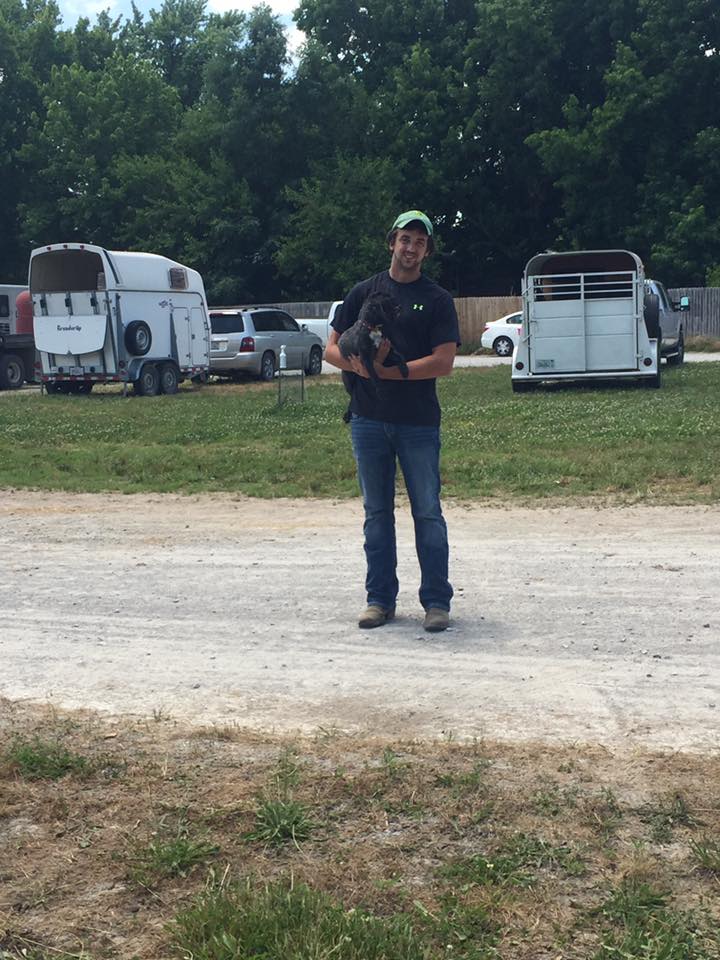 ….he asked all of these things as he carried our beloved late ShihPoo Yoshi around at the horse show so his feet wouldn’t get dirty. Photo by Meagan DeLisle

3. “How long do you think until we can buy another horse?”

Wayne’s thoughts, “Your @$$ can only be in one saddle at a time, what is the point of more than one horse?”

2. “Ohhhhh, my new breeches came in the mail today!”

Wayne’s thoughts, “Uhhhh… what new breeches? And what are breeches?… Does she mean britches?”

1. But the worst is when she doesn’t even say anything. The worst of all is when she is looking at her phone and all I hear is ‘clip clop clip clop’ in the background because I know that is going to be followed with, “Ohhhh Wayne look at this horse Amy has for sale!”

Poor poor Wayne never grew up around horses so he didn’t know what he was getting into when he started dating me. But he has taken it like a champ and plays along with me no matter how annoying I can be. And to prove that I am not all that God-awful to be around, he left this little dandy of a note at the bottom of his list of scary things the horse wife says.

“Regardless of all the crazy things you do and say about everything horse related, I love you more than you will ever know. And while it gives me a headache to see money fly into the stall door of that horse with the perpetually dumb look on his face, I am willing to do anything to make you smile…except for cleaning his sheath. I agreed to that before you told me what that was.”