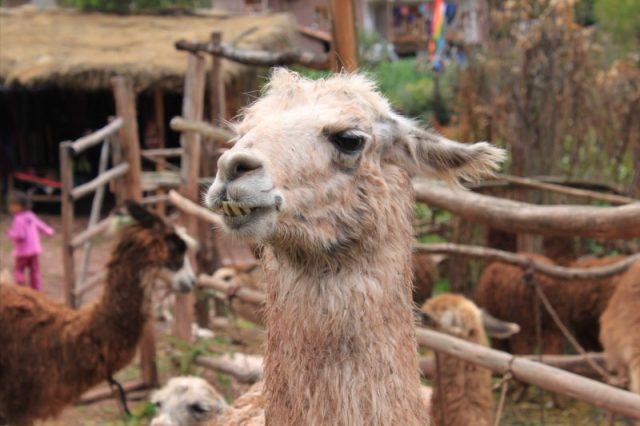 Disclaimer: horses are social animals and thrive with companionship. Some horses are happiest with other horses while others can thrive with a friend from a different species. This piece is meant as a humorous list to make you laugh rather than make you angry.

Here’s why these common companion animals are the worst:

Pigs are so cute and so smart! (As in: they will make your five-year-old kid look like an idiot and make you question why you decided to raise kids instead of pigs.)

Pigs also have the palate of a dumpster and are the ultimate living/breathing garbage disposal. But pigs and horses rarely get along. Most horses fall into two categories when it comes to dealing with pigs: they either are petrified of them OR they want to kill them. So this means you’ll be paying for vet bills either way — from injury to your horse or injury to your pet pig. If there is a slim chance your horse and pig DO get along, you’ll never want to eat bacon again, and that would be a crying shame.

Goats are so cute. That’s where the line is drawn between pros and cons.

Goats are also destructive little a-holes that will eat you out of house and home… literally. They actually like the taste of drywall and rusty nails. Not only are they like owning a wrecking ball with hooves and horns, they also like to head butt anything that gets in their space and they poop like a Pez dispenser. They’ll climb all over your horse, your horse will become buddy sour to them, and then they’ll die at the old age of seven and your horse will go into a great depression.

Unless you’re a little person, have a little kid, like to be pulled in a cart or want a seeing eye dog but don’t like actual dogs, there is really no reason to get a mini horse.

For one thing, they’re very cute and the natural response to anything cute is to feed it. Unfortunately, these things founder faster than you can say “Friday,” so excess treats are out of the question.

Farriers hate to trim them; even though they’re a quarter size of a real horse, the farrier will probably charge you more since they’re hard to get under.

Horses LOVE mini horses, so of course they’ll become buddy sour, and unless you like the ending to Romeo and Juliet, you’ll now have to pony the mini horse on all of your rides to avoid your horse having a complete and utter mental breakdown.

Donkeys are cute. They’re also loud, pushy, and blow up on anything more than straight grass hay. So now you’ll have to make a separate stall for your donkey for feeding time and if you’re even one minute late for their breakfast, everyone will know within the closest three counties. You probably see all these cute videos on Facebook of donkeys being super loving to humans, but in reality, you’ll end up with a human-hating, horse-obsessed donkey that will drive you completely bonkers.

They’re so cute, with their Snuffleupagus eyelashes and their Q-tip looking hairdos. Don’t be fooled… llamas and alpacas are jerks.

They will spit on you, they’ll spit on your horse and make god-awful gutteral groans that make them sound like they came from hell itself. They’re probably possessed, and I’m pretty sure they like the taste of blood. I jest. Maybe.

Besides, no one even knows how to care for one of these animals besides Dr. Pol or people from Peru, and both of those are hard to get ahold of in the middle of the night when they get sick.

TL;DR: save yourself the money and headache and just buy another horse. At least you’ll be able to ride it, as it eats its way through your wallet and heart.