Katherine Newman and Dandelion have taken over the lead in Round 2 of the Platinum Performance/USHJA Green Hunter Incentive Championship with a 265! There are just 30 remaining in the 3'3" before we wrap-up Round @.

Posted by EQSportsNet on Wednesday, August 16, 2017

Katherine Newman and Dandelion displayed spritely, forward momentum over Wednesday’s course at the Platinum Performance / USHJA Hunter Incentive Championship, and the round seemed to sway the whole week in a new direction, with all the day three rounds mysteriously seeming much more energetic after their high score on day two.

An 11-year-old Dutch Warmblood mare, Dandelion looked absolutely deadlocked on the course from the first fence, and moved through the course with significantly more energy and momentum than the slower style that often typifies top hunters, and the judges rewarded it handsomely.

The mare likely owes this forward style to hunters being her second career – she was previously competing in the jumpers in Europe before coming to America and switching gears to the judged ring.

“She’s very personable and people-oriented,” said Katherine about Dandelion. “We imported her at the end of 2015 from England, then we sort of started slow. She showed for the first time as a hunter a year ago in July. Now I think we have to re-evaluate what we’re doing because this was our end goal so we’ll see what’s next!” 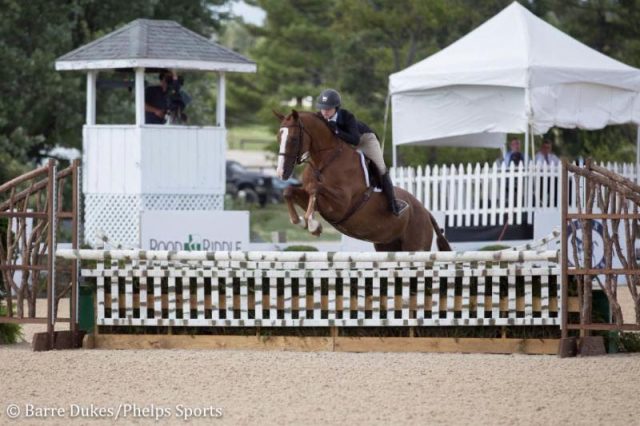 For their spectacular round, they skyrocketed from 14th after round one to second place after round two. The following day, the pair came back on a clean slate score for the championship, and once again put in a top notch performance, ultimately earning the reserve championship behind Scott Stewart and Playbook – who rode much more forward in their final round than they had on Tuesday or Wednesday. But it may be this forward, engaging round that people remember for years to come.

“I was really excited,” said Katherine after securing the reserve championship. “It’s been a goal of mine this entire year for this horse to do this class and the win yesterday really meant a lot. Even today it was amazing and it was fun just to do it because I’ve never gotten to do this before. I knew [Dandelion] could win it if I gave her a good shot so it was nice to have one that I had a good chance with.”

Winning rounds can be viewed on EqSportNet Facebook Page, or with a subscription you can livestream the full event on their website.