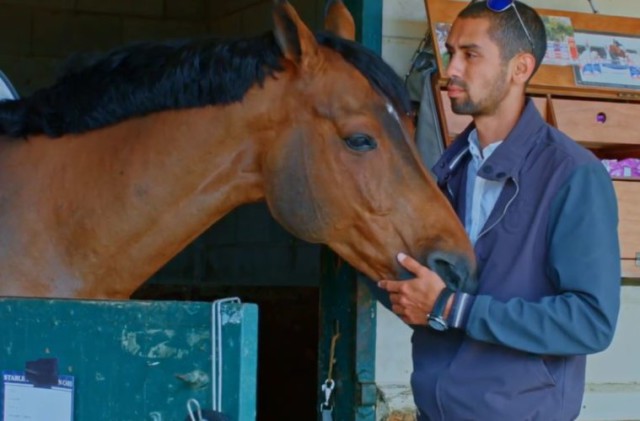 “My parents had the brilliant idea that my first horse be a five-year-old chestnut mare.”

And the rest is history. With those auspicious beginnings, rising Grand Prix phenomenon Nayel Nassar has built a reputation for being a horseman, a competitor, and a mainstay on the west coast and beyond. Last week he claimed a victory which was a surprise to many – though not those who knew him and his program – when he and Lordan won the $216,000 World Cup Qualifier Grand Prix at the Palm Beach Masters.

One person who was not surprised was his former coach, Laura Kraut, who took second behind the indomitable pair.

“I think he is one of the most talented young riders to come along in a while,” Laura said after the event. “It’s no surprise he’s sitting where he is.”

Born and raised in Egypt, (the country he still represents at international events) Nayel grew up in a strong local program that gave him a solid foundation for his future. In his teens when many young students get distracted, Nayel’s passion and his parents’ encouragement to persist through adversity pushed him further into the sport.

“Definitely there were lots of moments where I wanted to quit, being so young and not really knowing what following through means,” Nayel told Xmedia in a mini-documentary this winter. “But I have to say my mom and my dad were always just very encouraging. Whenever I get a little down or decided this wasn’t really for me or fell off three times in the same lesson they were really good at making sure I stayed the course just because they didn’t want me to see myself as a quitter.”

In his later teens, Nayel was able to head north to Europe and train with accomplished coaches like Markus Beerbaum and other renowned coaches to drill his competency and gain exposure to new competition. His abilities and ambition continued to skyrocket, and Nayel continued to hone in on his sensitive feel to any and every horse.

But two very special horses helped catapult Nayel into the international spotlight and launch his professional career: Raging Bull Vangelis S (“Brutus”) and Lordan. The two scopey and fearless horses brought different strengths and opportunities to the table for Nayel – where Brutus was a bit older and more experienced in the FEI ring (he was a longtime partner of British rider Robert Smith) and could show Nayel the ins and outs of the top level of sport, Lordan was a nearly clean slate for Nayel to produce himself.

Nayel took Lordan all the way from his first FEI class to contests all over the world with great success, including wins like the HITS Million, the speed class at the Longines Masters LA, and their most recent win last week at Deeridge Farms.

Recently, Nayel has also added two more potential superstars to his string in Acita 4 and Baraka. Acita 4, a ten-year-old Holsteiner mare who was third at the CSI3* in Del Mar this past fall, third in the CSI5* at Spruce Meadows, and winner at the Las Vegas National in 2015. Baraka is a ten-year-old Oldenburg gelding who was slow to come along in his early years, but this season came into his own with strong showings at Spruce Meadows, Thunderbird Park, and the Las Vegas National.

As for the still young rider’s future ( he only just recently aged out of the U25 division), Nayel plans to continue to fly mostly solo and apply the training of his youth from the likes of Markus and Laura to carve out his own destiny. He says he also thrives on the kindness and openness that exists in the sport when he receives advice and instruction from fellow competitors. Among his favorites is Enrique Gonzalez, who represented Mexico at the Beijing Olympics and 2014 WEG.

“Most people don’t know this, but I bother Enrique before every big Grand Prix by asking him what he thinks of my course plan.” Nayel said. “I even called him before the Million because I couldn’t find him! He always gives me the best advice and is the closest thing I have to a trainer out here.”

See Nayel’s full interviews on his background and the connection he was with Lordan in the mini-documentaries below, produced by X Media.

You can learn more about Nayel Nassar and stay updated on his 2017 season by following him on Facebook and subscribing to his YouTube Channel.