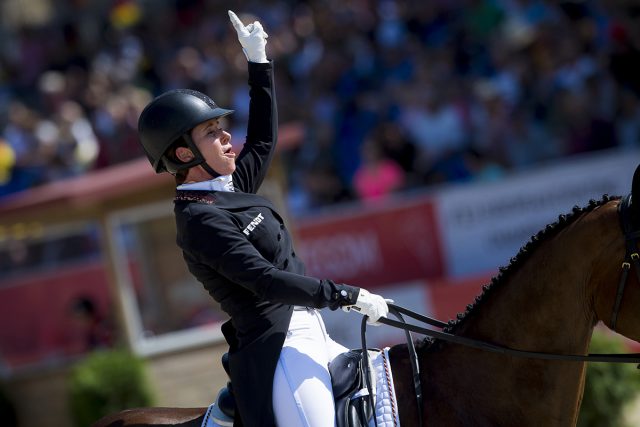 Bettina Hoy has resigned from competing on teams for the German Olympic squad, though she will still compete in select three-star and four-star competitions with her top horse Designer 10 and others.

“It was always clear to me that I would go while I am still at the top of my game,” Bettina said. “Having competed at three Olympic Games, five World and 10 European Championships, I feel it is the right moment to declare my resignation from the German Olympic squad.”

Bettina won her fourth German national championship title at Luhmühlen in 2017 with Seigneur Medicott and was subsequently named to the German team for the European Championships at Strzegom. Seigneur Medicott led at Strzegom after dressage but fell early on the cross country course. He has since been sold to India’s Fouaad Mirza and is currently competing at the one-star level.

Bettina also began coaching the Dutch eventing team last year and and said resigning from the German Olympic squad will allow her to more fully focus on her coaching duties.

“The work for this fantastic federation is a great honor and very rewarding,” Bettina said. “Both the Dutch federation and their riders deserve my full attention now.”

Bettina said she fully intends to continue producing young horses and competing at the highest level of eventing, and she also hopes to fulfill her goal of competing in Grand Prix dressage.

“From a sporting point of view I also still have the dream to ride a Grand Prix dressage and because that part of our sport has always been my special strength I will now intensify my training in pure dressage,” she said.

We wish Bettina all the best in the 2018 season and beyond! Go Eventing.