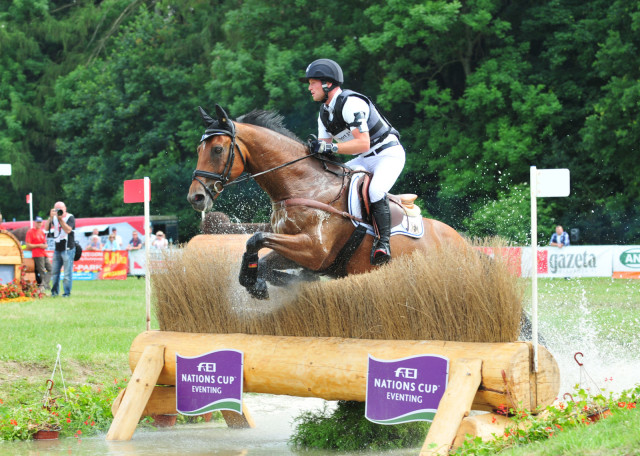 A slew of top horses and riders in Europe are coming out in full force this weekend as the first leg of the FEI Nations Cup series kicks off at the Fontainebleau CICO3* in France. We don’t have any American or Canadian pairs competing at the event, but there are still a number of horses and riders to be excited about.

For starters, Michael Jung will have La Biosthetique Sam FBW out for his first competition since Aachen CICO3* last year, when the 15-year-old Baden-Württemberger gelding finished third in his final prep for the World Equestrian Games. A hoof issue that cropped up in German team training camp ultimately sidelined Sam, and now the horse is set to make his comeback.

It will be hard to bet against Michael and Sam to take the win at Fontainebleau, though the horse will have to go up against his stablemate and last year’s WEG individual silver medalist fischerRocana FST. At 10 years old, this mare is just coming into her prime, and it’s an exciting time to be following her career.

Michael confirmed he intends to aim for Rolex Kentucky CCI4* with both Sam and Rocana, though his name isn’t on the official entry list yet as of this morning. Francis Whittington will have Easy Target, who is already entered for Rolex, at Fontainebleau this weekend as well. After winning Blenheim CCI3* last year, “Smokey” looks primed and ready to come out swinging in 2015.

I said we don’t have any Americans competing in France this weekend, but we do have an American-bred horse entered! Crown Talisman, a 12-year-old Holsteiner/Thoroughbred gelding bred in Maryland by Martha Thomas, is set to make his first FEI start with his new rider Nick Gauntlett.

Produced through the three-star level by Doug Payne, “Tali” finished sixth at Saumur CCI3* in France last year, so he’s on familiar turf this weekend, as Pierre Michelet designs both courses. Doug made the difficult decision to sell the horse last year in order to finance his new farm in North Carolina with his wife, Jess. We wish Tali all the best with Nick this weekend!

Australia has a strong entry list with Chris Burton and TS Jamaimo, the Adelaide CCI4* winner in 2013, and Kilronan, who finished fourth with Paul Tapner last year over a notoriously difficult Badminton track. Andreas Dibowski, who just returned to Europe after teaching his first ever clinic in the U.S. at Twin Rivers, will also compete his longtime partner FRH Butts Avedon, who is also aiming for Rolex.

Four teams will compete for the Fontainebleau Nations Cup win: France, Australia, Great Britain and the Netherlands. A new FEI rule for 2015 requires that at least three teams be entered to in order to hold any Nations Cup event after paltry entries at some legs in years past made for rather lackluster awards ceremonies.

Stay tuned to EN this weekend as we post results and score recaps from Fontainebleau.