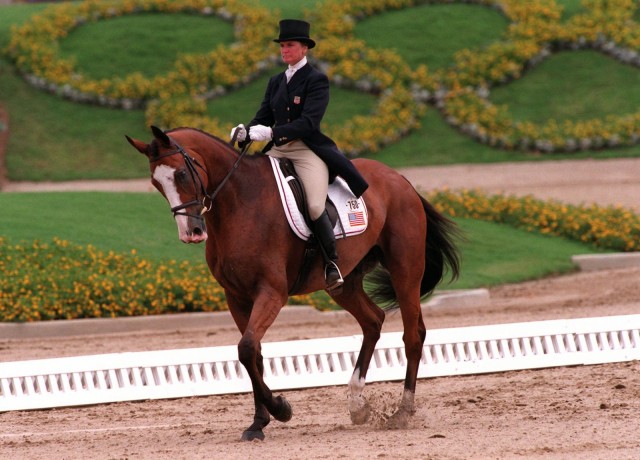 We’ve just received word from Karen O’Connor that Biko passed away today at the O’Connor’s farm in Virginia. He was 30 years old. “It was his time,” Karen said. Owned by Dick and Vita Thompson, Karen found Biko through William Micklem as a 4-year-old in Northern Ireland. “When I saw him when we were shopping, I took one look at him and knew that I had to have that horse,” Karen said.

Her instincts proved to be absolutely right, and Biko will be remembered as one of the greatest horses in U.S. eventing history, as well as a fan favorite loved by so many people who followed the sport. “I always thought of him when I watched ‘War Horse,'” Karen said. “He was such a remarkable horse.”

Biko competed on the 1996 U.S. Olympic Team and helped America win the team silver medal thanks to a clear show jumping round. He also represented the U.S. at the 1994 World Equestrian Games, where he finished in 11th place individually. Biko was named the Horse of the Century by the USEA, and he also had multiple top placings at Badminton and Rolex.

“He was the only horse I ever rode that needed extra pages in his passport because of all the places I took him internationally,” Karen said. “He was part of my life for 26 years. He was an incredible horse.”

The EN team sends our condolences to Karen and the whole O’Connor team during this very sad time. Rest in peace, Biko.