Yes, that really is Boyd Martin on the front of 'Boyd Bucks' - Photo from Boyd & Silva Martin's Blog

The next time that you reach into your wallet to pull out a five-spot to buy a pumpkin-spiced latte, pause just a moment to appreciate the history that went into the piece of green paper that you’re preparing to fork over. Paper currency in the US of A is a venue to represent some of the our country’s most influential founding fathers. You’ve got Washington, Lincoln, Franklin…and Boyd Martin?

Go ahead, rub your eyes. But when you go back and re-read, you’ll see that there was no typo. That’s right folks – Boyd has now gone green. As in “show me the money” green. And while I may not be talking about actual legal tender here, this topic might just be more exciting for horse owners that are local to the Chester County, PA area.

A promotion just started up this month at my local feed store, Oxford Feed & Lumber, in which ‘Purina Bucks’ are being given to customers for any purchase of branded Purina products. From October 1st through November 30th, I’ll be saving up my bucks…while my horses are chowing down. And the exciting part? I just have to wait until December 10th, so that I can show up to bid on awesome swag at an event hosted by Oxford Feed. 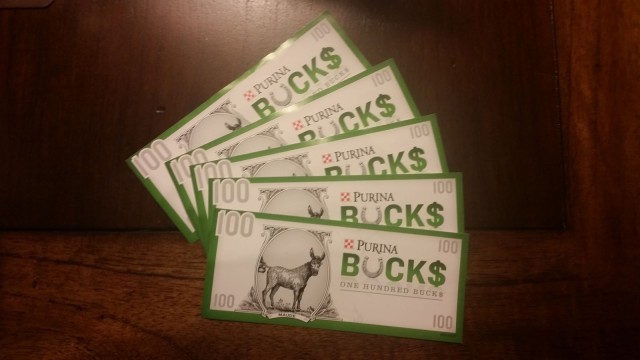 The beginning of my own Purina Bucks collection – let the hoarding begin!

Now what does any of this have to do with Boyd Martin’s face appearing on currency? So glad you asked–‘Boyd’ Bucks are a fun part of Oxford Feed’s promotion. Anyone who attends the upcoming Schooling Stadium Show at Windurra USA on Thursday, October 9th (check out the details here) can stop and visit the folks from Oxford Feed & Lumber in attendance to grab their own Boyd Bucks. Which can be traded in at Oxford Feed & Lumber for official Purina Bucks to use at what I like to call the Cash In Party on December 10th.

The only question remains is…how many of the Boyd Bucks distributed will be cashed in? And how many will be saved as collector’s items – after all, an eventer. On currency? Sure, it’s fake money, but come one people–this is freaking awesome.

So what’s next – Philly D Bucks? Sally Bucks? Hawley Bucks? How about some Chinch Bucks? I know that I’d like to see some Buck Bucks. I think I see a themed Monopoly game in the future here people…

And here’s a big shout out to the team at Oxford Feed & Lumber – my own local feed store. My only question is…will my favorite team member be present at Windurra’s Schooling Stadium Show? That would be Otis – Oxford’s awesome resident feline (who keeps watch over all of the bags of feed and has the tough job of doing a quality check on the in-stock pet beds).