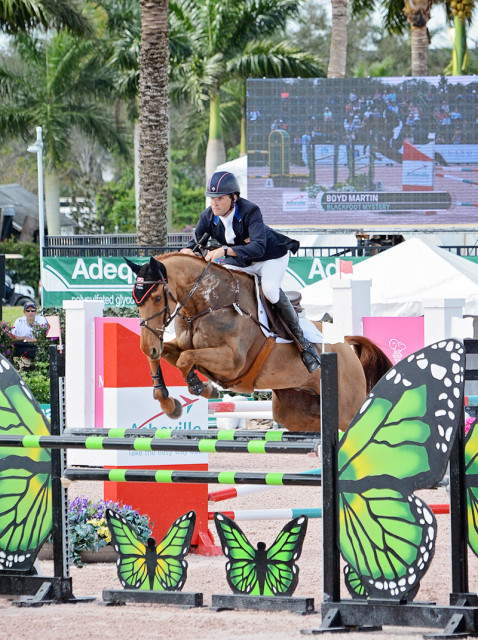 A dramatic morning of show jumping significantly shuffled the leaderboard here at the $75,000 Wellington Eventing Showcase, and Boyd Martin and the Blackfoot Mystery Syndicate’s Blackfoot Mystery now find themselves holding the lead after jumping one of the eight double clear rounds. That effort moved Boyd and “Big Red” up from third place to lead, and now Boyd finds himself one clear and quick cross country round away from winning this showcase for a second year in a row.

Boyd has focused diligently on improving this 12-year-old Thoroughbred gelding’s show jumping since he took over the ride from Kelly Prather last summer. Since then, the horse has started improving under the tutelage of Richard Picken and USEF eventing team show jumping coach Silvio Mazzoni, and this is the first clear show jumping round Boyd and Big Red have jumped since starting their partnership.

Colleen Rutledge was on fire today at Wellington, finishing show jumping as the only rider to deliver two double clear rounds. She was one of the first to go aboard jumping machine Escot 6 and then returned toward the end of the class to also jump clear and inside the time with her own Covert Rights, another horse that has improved immensely in this phase since Colleen started training with Silvio in the High Performance program.

Colleen moved up from equal fifth place to second place with Covert Rights, with puts them just .4 penalties behind Boyd and Blackfoot Mystery. Visiting Kiwi rider Dan Jocelyn moved up from 13th to third place after laying down a beautiful round aboard Sable Giesler’s Devil Munchkin, an 8-year-old Dutch gelding with scope for days that is going to be very exciting to watch in the future.

Allison Springer and the Arthur Syndicate’s Arthur, who held the overnight lead after dressage, had one rail down to drop down to fourth place. Phillip Dutton is rounding out the top five as the only competitor to have both his rides in the top 10. Tom Tierney and Annie Jones’ Fernhill Fugitive jumped double clear to move from 13th place up to fifth, and Phillip had one rail down with Fernhill Cubalawn, owned by Tom Tierney, Simon Roosevelt and Caroline Moran, to drop one spot to 10th place.

Buck Davidson and Carl and Cassie Segal’s Ballynoe Castle RM came oh so close to leading after show jumping, but they pulled a rail at the last fence on course, which drew a huge grown from the crowd and dropped them to sixth place. Jennie Brannigan and Catalina, owned by Candace Kircher and Tim and Nina Gardner, win the Biggest Mover Award after show jumping, with a clear round skyrocketing them from 18th to seventh place. (I think she also had the biggest smile of the day after that round!)

In addition to the riders already named, Michael Pollard and Boris O’Hara and Tim Price and Novelle also jumped super clear rounds inside the time, which moved them both up to 13th and 14th places, respectively.

In addition to rails falling throughout the course, two combinations also had refusal. Tim Price, our other visiting Kiwi rider, was having a super go on Classico Z until the horse took a disliking to a fence coming off a tight rollback turn and slammed on the brakes. Sinead Halpin saw a long spot at the final fence aboard Manoir de Carneville, and “Tate” unfortunately said no.

Scores are still very tightly bunched, with just 4.8 penalties separating the top 10. Capt. Mark Phillips’ wheeled this cross country very tightly, and riders will have just 3 minutes, 58 seconds to cover the 2,125 meters on the course. Craig Callen, who owns Boyd Martin’s other showcase mount Welcome Shadow, said it best when he described the course as a go-kart track: It’s a twisty roller coaster out there! Click here to preview each fence on the course.

Cross country starts at 1 p.m. EST, so it won’t be long before we’re crowning this year’s champion of the Asheville Regional Airport $75,000 Wellington Eventing Showcase presented by Wellington Equestrian Realty! We’ll be running live updates right here on EN, plus tweeting @eventingnation. Don’t forget to watch live at this link. 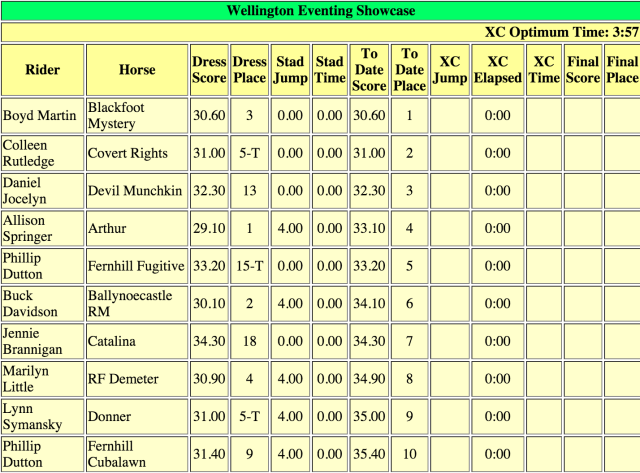