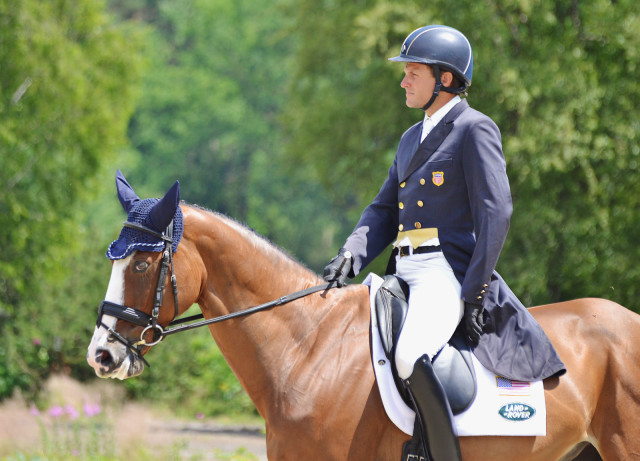 Boyd and Otis before their test. Photo by Jenni Autry.

Boyd Martin and Otis Barbotiere were fourth out this afternoon at the start of the first day of dressage here at Luhmühlen, scoring 58.5. That’s fairly marked, as you’ll see in the video of the test. Otis just didn’t want to play in the little white box today, and he waffled between being behind Boyd’s leg and a bit too sensitive to the aids. The judges didn’t get the best starting impression when Otis cantered out of the first halt instead of trotting. Otis also had a drama queen moment during the half-pirouette at the walk when he thought about rearing; Boyd definitely had to ride him conservatively to keep the lid on.

Of course, Luhmühlen isn’t going to be a dressage show. Capt. Mark Phillips’ course is doable, but it’s still a proper four-star, and Otis is a fantastic cross country horse. They’ll likely be sitting pretty far down the leaderboard by the time the dust settles tomorrow, but with Otis’ prowess in both jumping phases, they’re still poised for a competitive performance. Unfortunately, the elephant in the room is World Equestrian Games selection, and that’s not the score Boyd wanted. But it’s still anybody’s game, and he has one more ride yet to come with Shamwari 4 tomorrow afternoon.

We just wrapped up the first group, and Benjamin Winter and Wild Thing Z are currently leading for the home team on a score of 51.2. The ground jury of Gillian Rolton, Ernst Topp and Alain James are definitely waiting to be wowed, and that’s very likely going to happen at the start of the next group, when Elaine Pen and Vira take the ring. I watched her schooling this morning, and she has suspension to burn. A quick peek at her bloodlines shows why: She’s by Jazz out of Option G, by Whinny Jackson. Dressage breeding much?

Boyd wore a helmet during his test today, which is the first time he’s ever ditched his top hat in a CCI4* competition. With wife Silva here this weekend, it’s a smart decision on Boyd’s part and one we hope will encourage more riders to adopt this growing trend. With the ongoing top hat debate in mind, I’ll be keeping a running tally of top hats versus helmets in the four-star. So far, just two riders wore helmets in the first group: Boyd and Rodolphe Scherer of France; that’s roughly 22 percent of the riders. Stay tuned for much more from Luhmühlen. 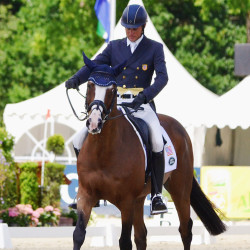 After the final halt. Photo by Jenni Autry. 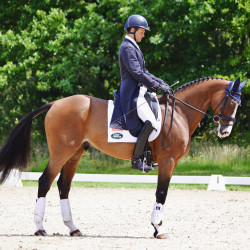 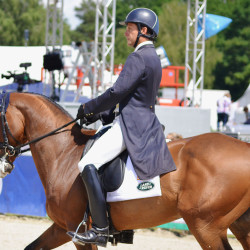 Entering the stadium for the test. Photo by Jenni Autry