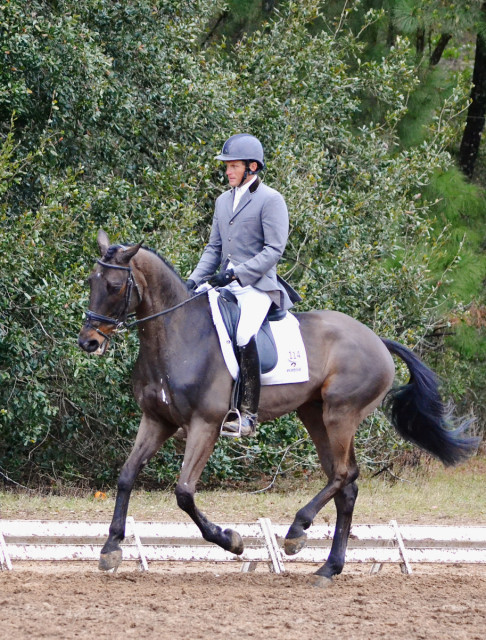 Boyd Martin has been awarded a Land Rover grant to compete the Shamwari 4 Syndicate’s Shamwari 4 at Luhmühlen CCI4* in Germany June 12-15. A 12-year-old Hanoverian gelding, “Shammie” joined Boyd’s string of upper-level horses in January after shipping over from Ludwig Svennerstal’s yard in Europe. Boyd and Shammie were 5th in the Advanced at Red Hills, and Phillip Dutton took over the ride after Carolina International, where Boyd broke his leg on cross country.

Phillip and Shamwari were leading at The Fork CIC3* after dressage on a score of 45.9 before going off course in show jumping, but they completed all phases at Fair Hill CIC3* a couple weeks ago to finish 5th. Along with Trading Aces and Otis Barbotiere, Shamwari 4 is one of Boyd’s strong prospects for the WEG team, and EN will be on the grounds in Germany to bring you all the action from Luhmühlen as Boyd looks to have a good run in preparation for Normandy.

“I’m thrilled to receive the grant to get to Luhmühlen this year,” Boyd told EN this morning. “I’m very much honored and appreciate the USEF showing faith in me and Shammie. I’m also planning to take my 2012 London horse Otis Barbotiere along with Shammie for the trip to see if I can get in a couple of good results before the WEG selection is made.”

Boyd’s original plan was to run both Otis and Shammie at Rolex, but he had to scrap that after his broken leg took longer than expected to heal. “I’m back riding dressage now full-time,” Boyd said. “I’ve jumped a couple of times, but unfortunately on landing it’s quite a piercing pain. All my doctors have said that pain should be gone within the next 10 days, so it’s still up in the air as to what I’ll do at Jersey Fresh.

“The good news is my fill-in jockey Phillip is prepared to ride Shammie around the three-star if I’m not up to it, just because I believe the horse needs another tricky run before Luhmühlen. I’m much more familiar with Otis and could potentially do just the dressage at Jersey and then take them both to Virginia Horse Trials in a couple weeks to get in a cross-country run on them before heading to Europe.”

This is not the lead-up Boyd planned on for the WEG, and while he said the lengthy healing period has been frustrating, he’s staying positive and keeping himself focused on Normandy. “I’m motivated and inspired after spectating at Rolex last week,” Boyd said. “The reality is there’s a lot of really good American horses and riders that are in form at the moment, so I’ll have to go to Germany on a mission to do very well.”

While they’re lacking runs together this spring, Boyd, Otis and Shammie are all very experienced competitors. “They both competed at the London Olympics, so I’ve got that up my sleeve a bit compared to if they were green horses,” Boyd said. “They know what they’re doing; I know what I’m doing. It’s just a matter of doing it together.” Since changing his nationality to ride for the U.S., Boyd has ridden on the 2010 WEG team with Neville Bardos and the 2012 Olympic team with Otis.

High Performance also announced in the press release this morning that Team USA will not be sending a Nations Cup team to the Aachen CICO3* per the Selection Committee’s recommendation in order to focus more resources toward WEG. Congrats to Boyd and the Shamwari 4 Syndicate on receiving the Land Rover grant. Phillip is also aiming Bruce Duchossois’ Mighty Nice at Luhmühlen, so we’ll have three American horses at the event.