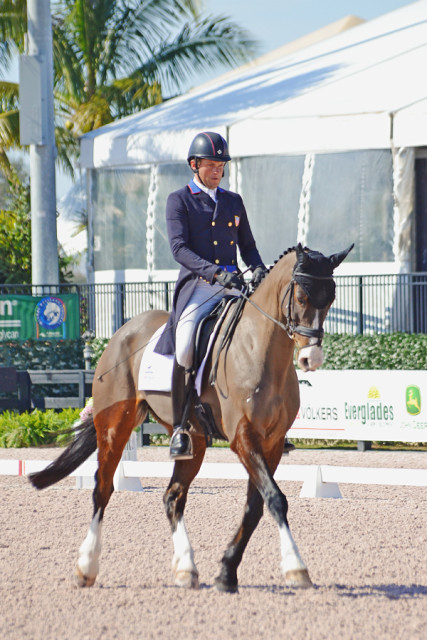 With just two horses and riders left to go in dressage at the $50,000 Wellington Eventing Showcase, no one had been able to catch Michael Pollard and Cyrano’s score of 25.7, which led for most of the day here in Florida. But Boyd Martin and Trading Aces rose to the occasion as the penultimate pair to perform in The Stadium, scoring 24.8 to hold the overnight lead.

“He was absolutely fabulous today,” Boyd said of “Oscar,” an 11-year-old Irish Sport Horse gelding owned by the Trading Aces Syndicate. “It’s the first time I’ve done a test where I felt like I got everything out of him. I’m very thankful for the group who owns him and has stuck by him.”

It’s been three months since Oscar puttered out on cross country at Galway Downs CCI3* in Temecula, an event meant to be his comeback after the same scenario ended his weekend early at last year’s World Equestrian Games in Normandy. 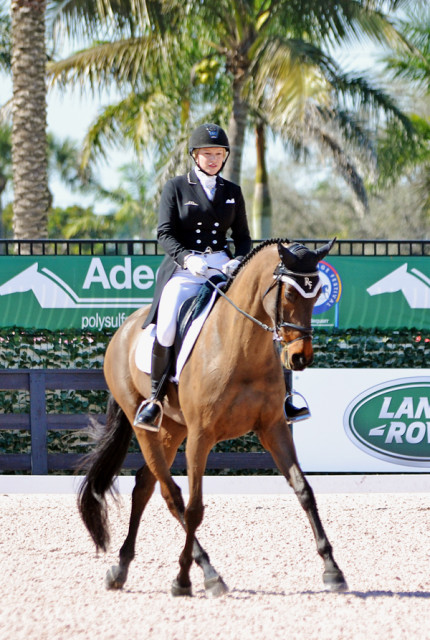 After spending the winter thinking about what’s next for Oscar, Boyd said more events like this Wellington Eventing Showcase would be ideal for the horse. “We’re at a point in his career where if these sort of things take off and CIC3* events become richer and richer, he’s a tailor-made horse,” he said.

“As a four-star horse, there’s obviously a big question mark on him … Especially with the syndicates, we buy horses to try to get on teams. He’d be one of the best quality horses I’ve ever ridden, but he’s more suited to this type of event.”

As Boyd put it, there have been many highs and lows with this horse, but his group of syndicate owners were all smiles today to see Oscar put in such a nice test. 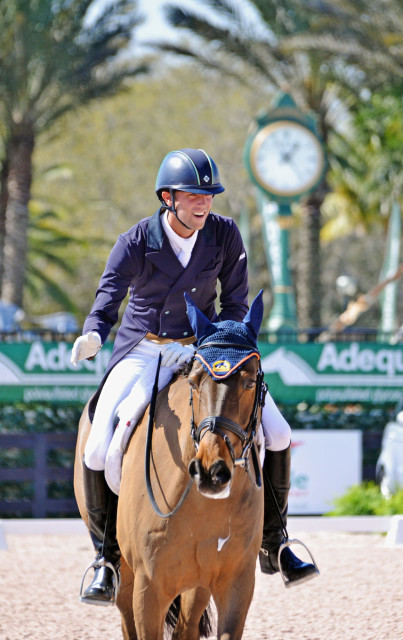 Michael Pollard was also all smiles after delivering a better test than he admittedly expected with his father-in-law Carl Bouckaert’s London Olympic mount Cyrano, who is now up for sale after spending some time in the jumper ring over the past couple years.

“From my horse’s standpoint, I’m really pleased with today. When I got here yesterday, I wouldn’t have bet on myself sitting in the press conference,” Michael said. “He’s only been in the barn for two months, and I’ve been really happy with the progress made over the last couple weeks.”

Marilyn Little is also very pleased with the progress she’s made with RF Scandalous since they started their partnership last summer. Their test today was very impressive, and Phoebe and Michael Manders, who own the 10-year-old Oldenburg mare in partnership with Raylyn Farms, were here today to see “Kitty” float across the ground.

While “she is qualified for Advanced on paper,” RF Scandalous is still very new to the level, as Marilyn put it. She won the CCI* at Galway Downs last fall, and this weekend is a big step up for her.

“This was only our second Advanced test,” Marilyn said. “I look for a good performance from her, but it’s certainly a big weekend for her. It’s early in the season for our horses to be on top of their game.”

As for other notable tests in this afternoon group, Laine Ashker and Anthony Patch put in a very nice performance to score 29.1 to sit in fourth place, just ahead of Jennie Brannigan and Cambalda on a score of 29.2.

This is a little further down the leaderboard than we usually see Buck Davidson and Ballynoe Castle RM, with their score of 29.6 putting them in sixth place. The canter work was perhaps a touch quieter than we usually see from them, but I expected to see a lower score regardless. 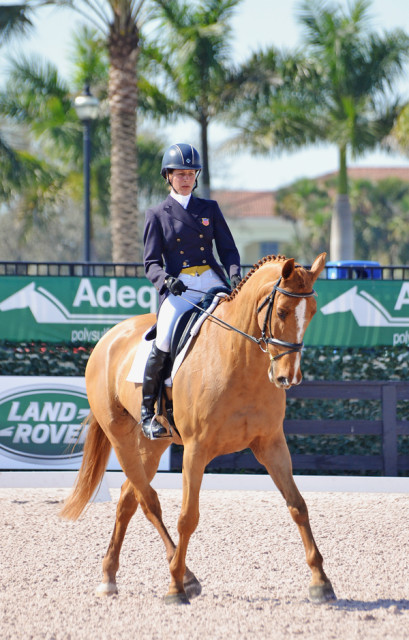 Will Coleman and OBOS O’Reilly had one of the nicest tests we’ve seen from them in recent memory, scoring 30.2 to sit in equal place with Liz Halliday-Sharp and Fernhill By Night — appropriate since they’re sharing a yard for the winter at Liz’s Horsepower Equestrian in Ocala.

Phillip Dutton and Fernhill Fugitive, a 10-year-old Irish Sport Horse gelding owned by Tom Tierney and Annie Jones, round out the top 10 on 30.6 with a workmanlike test. There’s much more coming your way next, including what the eventers think of this new showcase in Wellington.

Show jumping starts at 10:30 a.m. tomorrow, with cross country set to start at 1:30 p.m. Stay tuned for much more from #WellyEventing. 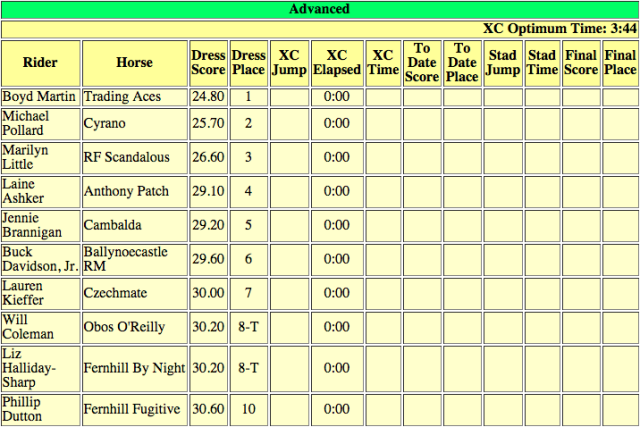