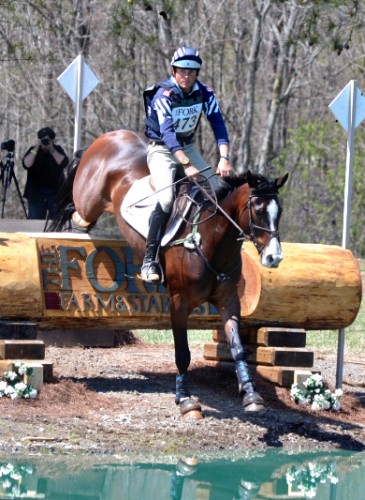 Boyd Martin and Trading Aces at The Fork. Photo by Jenni Autry.

You can’t keep an Aussie down for long. Boyd Martin competed at his first event last weekend since undergoing ankle surgery in May; he eased back into things with just one preliminary ride on New Cadet at the Maryland Horse Trials. After falling off a scooter at the competitor’s party at Southern Pines in March and then falling off Crackerjack before show jumping the next morning, Boyd tore six tendons and ligaments in his right ankle. Surgeons at Christiana Hospital in Newark, Del., repaired the ankle on May 1 following Rolex — Boyd’s last event before surrendering to time out of the saddle to heal — and captured the surgery via iPhone photos for Boyd’s blog. (Warning: The photos are graphic!).

“I didn’t expect to be back quite this quickly,” Boyd said. “The doctor said at best I could be back for Millbrook at the beginning of August, so this was three weeks ahead of schedule. The ankle is not quite 100 percent yet. It’s good enough to bomb around in prelim with my stirrups about fives holes to long. My ankle doesn’t have the full mobility like the other, but I’m going to a physical therapist three times a week. He said the stretch is pretty much fully healed at about 97 percent. The ankle is stiff and sore, but the physical therapist doesn’t believe I’ll re-tear anything. As long as it’s not in agonizing pain, he doesn’t think I’ll do any damage.”

It’s the same optimistic attitude you’d expect from someone who’s undergone six previous surgeries. “I’ve been through the mill a lot over the years,” Boyd said. “You adapt and do the best you can with what you’ve got. It’s very frustrating being injured because you never feel like you’re going to come back to the level you were riding at before you got hurt. I broke my knee in nine places in 2003, and I went through the same thing. Now you wouldn’t even know me knee was ever injured. By September, I’ll probably be as good as ever.”

Part of Boyd’s motivation for getting back into the saddle ahead of schedule is to get on all of his Advanced horses before Millbrook to make sure everyone is ready to go. Trading Aces will be making an appearance, and we might also be seeing Crackerjack, Master Frisky and Pancho Villa. “I’ve had a couple injuries this year and the horses have had a couple injuries, so I’m trying to customize each horse’s schedule to get them qualified and firing for when it counts next year,” Boyd said.

Of course, he’s referring to being selected for the 2014 World Equestrian Games team in Normandy. And while his two top Advanced horses Neville Bardos and Otis Barbotiere have been out of competition this year, all signs point to both horses making a successful comeback next season. “Otis is in more work than Neville right now, who is sort of half in work,” Boyd said. “What I don’t want to do is set too many short- or long-term goals. My commitment is to have the soundest horses and have them as sound as they’ve even been. If you start standing your ground to go for something like Pau, you’re going to patch them up to get there.”

Neville will be back into full work by November with plans to aim for a spring three-day. Otis will tackle Fair Hill or Galway Downs, although he could end up competing at neither. “Unfortunately, I missed all the spring three-days with this ankle, so I’ve got a bunch of two-star, three-star and four-star horses that need a start,” Boyd said. He’s considering taking Trading Aces and Crackerjack to Boekelo; if not, they’ll do Fair Hill. And he also has Pancho Villa, Steady Eddie and New Cadet to worry about. It’s going to be a busy fall and spring for Boyd as he looks to play catch up.

While taking so much time off has derailed his summer and fall schedules, Boyd is maintaining a healthy perspective on the down time. “To be honest, in a strange way I’ve enjoyed it a bit,” Boyd said. “The last couple of years have been frantic, and I’ve had a pretty good run too. With everything well in place with Neville and Remi and Otis, we came out guns blazing. This year from the moment I got knocked unconscious while cross-country schooling in February, everything has gone from bad to worse. It’s forced me to take a step back and chill a bit, which has been good for re-evaluating all the horses and the training.”

Boyd has also enjoyed the opportunity to devote more time to the students in his program, as well as focus on the quality of training for his own horses. “Competing every weekend or even twice a week on horse after horse turns you into a bit of a racehorse jockey,” Boyd said. “In the last couple of months, I’ve never put so much of an emphases on the quality of training and really spending the time necessary to school the horse. I’m sort of reinventing the way I approach things. It’s frustrating as hell, but in a weird way, I haven’t taken a day off.”

With his ankle on the mend and a talented string of Advanced horses raring to go, Boyd is ready to put a tough 2013 behind him and focus on doing everything he can to qualify for the WEG team next year. “I’m lucky in that I’ve got a couple seasoned campaigners and then some very exciting young horses that will bring it,” Boyd said. “I’m pretty fired up. Often when you see an athlete have an injury, they actually come back stronger, more motivated and more inspired. I’m eager to return to where I was at this time last year.” Boyd would also like to notify the organizers of Southern Pines that he will not be attending the competitor’s party on a scooter next year. Go Boyd.