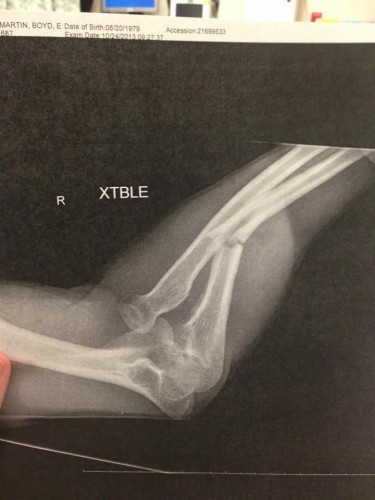 Well damn.  That’s an x-ray of what once slightly resembled Boyd Martin’s arm.  Boyd dislocated his elbow and broke his arm on Thursday when a horse kicked him at his farm in Pennsylvania, according to Boyd’s barn manager and head groom Lindsey Taylor.  Boyd is scheduled for surgery today and there is no word yet on how long he will be out.

It goes without saying that EN sends our heartiest get-well-soons to Boyd.  This has been a tough year for Boyd on the injury front.  He rode around Rolex with a shredded ankle and had surgery on that the following week.   Between Rolex this year and competing through the spring 2011 season with an unknowingly broken wrist, Boyd’s picture is in the dictionary next to “eventing tough.”  Feel better big man, nothing can hold you down, and we’ll see you out here again soon, at least three times faster than the doctors would like.  [Picture via FB]

Update 11:35 a.m. — COTH quotes Boyd’s wife, Silva, as saying he was hand-walking one of his young horses that was coming back from an injury. “The horse spooked and he kind of spun around and kicked him in the arm.”

Update 5:03 p.m. — Boyd is out of surgery and heading home to start the recovery process.