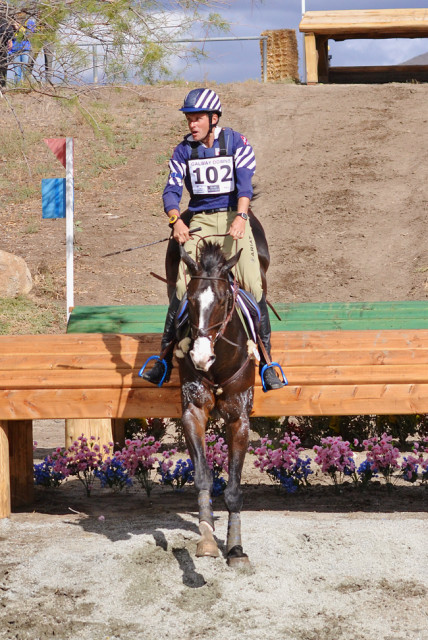 Boyd Martin set out today at Galway Downs International looking for redemption after Trading Aces quit at about the 8-minute marker at this summer’s World Equestrian Games with Phillip Dutton in the irons, hoping the flatter ground, faster footing and smaller jumps would help the horse find his mojo again.

But it just wasn’t meant to be today, as the horse stopped at 19a, a brush jump going into the third water complex; Boyd retired shortly after. “Oscar,” a 10-year-old Irish Sport Horse gelding owned by the Trading Aces Syndicate, looked full of running pulling up the hill to the second water, and he stumbled a bit on the landing off the bounce into the complex. The refusal occurred at the next combination.

“He set out very positive. In hindsight, maybe I was a bit too quick in the beginning,” Boyd said. “I really wanted to see where the horse was and came here trying to win. I think, at the same place at the course (as WEG), around the 8-minute mark, he definitely started to tire.”

Boyd addressed Oscar’s cross country struggles in yesterday’s press conference, when he sat tied for the lead following dressage, saying at this point he thinks the issues are more mental than physical, as the horse has galloped, swum and jogged to the point where he’s extremely fit. As Boyd put it: “When the going gets tough, he mentally struggles.”

Would the outcome have been different if Boyd had set out at a slower pace? “In hindsight, I was riding him maybe a little too quick. I was 20 seconds too fast on some of the minute markers,” Boyd said. “If I had my time over again, I might have set out cautiously. At the same time, it’s pointless running him around with 18 times penalties like he did at Boekelo. We’ve proven he can go slowly. He’s at the point in his career where we want to win with him, and today we didn’t.”

So what does this mean for Oscar? “It’s too early to make a concrete plan,” Boyd said. “It’s very disheartening because the horse is so awesome at everything but this very important part. So we’ll check medically that there’s nothing else wrong with him, and we’ll figure out a plan,” Boyd said.

“He’s very hard to beat at a CIC, and I think he would make a very good Pan Am horse,” Boyd said. “The good thing is that we’re all in one piece, and that’s the nature of the sport. At this level, if you won every time you went out, it would be boring.” Read the full CCI3* report here, and stay tuned for much more from Galway Downs.