Today we bring you the Davidson Region (3) Heyday against (6) Out and About, with another classic Aussie/Kiwi battle between (3) True Blue Girdwood and (6) Messiah.  Virginia Tech is still complaining about being excluded from our tournament, but the selection committee is satisfied with the participants they have chosen; VT simply didn’t have the FEI record to justify their inclusion.

You know the deal.  Vote for your favorite, then discuss your pick in the comment section, we love hearing stories!  Or complaints and whining, if you so choose.  By the way, Duke Sucks.  [Ed. note: sorry for that comment, it was entirely unnecessary.]  [Writer note: but it’s true!]

From Jo:
I voted for Teddy for all the reasons Amanda and Kim gave, but I have to admit to more than a twinge of disappointment for Tex…..he, once again, has the bad luck to be the bridesmaid and overshadowed by his flashier competition. Hardly fair to a good horse.

I HAD to vote for Giltedge. 6 medals for the US team? How many horses win even one? It is not his fault that he was overshadowed and ended up on 2 Olympic teams with no chance of individual glory. The pony will probably win because he was memorable and had a fan club, but as another poster noted above, Giltedge had an AMAZING career which few will equal.

Anonymous also had more to say….

Murphy Himself needs to win this entire bracket. Best. Event Horse. Ever.

As the bracketologists predicted, poor (3)Giltedge once again faded into the background as the (6)Super Pony stole the spotlight and advances on to the Sweet Sixteen to face (2) Custom Made.  On the other side, (6) Murphy Himself bested (3) King William, proving that the legacy of a dazzling cross-country horse will always live on.  Murphy will face (7) Supreme Rock in the next round; the experts say Murphy will leave a two strides out on his way past Supreme Rock into the Elite 8.

Heyday enjoyed a long, prosperous career, first competing at Advanced when he was six years old, and finishing 13 long-format three-day events in the top 20.  He was yet another plain, average bay with above-average talent for Bruce Davidson.  In 1995 they won the PanAms, and earned the team silver medal at the 1996 Olympics (9th individually).  The next year, he earned second at Blenheim CCI***.  An 8th place finish at Rolex in 1998 sent him to the WEG, as part of the bronze medal winning US team.  From 2000-2003, Heyday partnered with Young Rider Maisy Grassie.  Heyday’s success continued as he showed her the ropes from prelim to advanced, winning the NAYRC CCI* championship along the way.

At only 8 years old, “Outie” won the individual bronze medal at the 1996 Olympics in Atlanta with Kerry Milliken.  A classic American thoroughbred, running and jumping was definitely his forte.  In 1997, the pair placed 7th at Burghley and won team bronze in the 1998 WEG as the highest-placed Americans on the team.  Finishing up his career, Out and About was 3rd at Badminton in 1999.

True Blue Girdwood “Jug head” or just “Jug” was the only horse Phillip brought with him when he moved to the US in 1991.  Phillip says Jug the horse who really brought him onto the world stage.  True Blue Girdwood represented Australia in 1996 Olympics, winning team Gold in Atlanta, and also competed with Phillip at the ’94 & ’98 WEGs, Rolex, and Badminton (placing 6th in 1995).  After his career with Phillip, Jug mentored several of Phillip’s students as a schoolmaster.

Blyth Tait converted Messiah from a show jumper in the late 1980’s.  By 1992, the pair won the individual and team Gold at the WEGs in Stockholm.  Tait and Messiah won the Bronze at Barcelona, moving up from 69th after the dressage and helping the New Zealand team win Silver as well.  Blyth described Messiah as having a ‘fragile’ temperment and said that the horse got harder to ride at competitions as he got older. 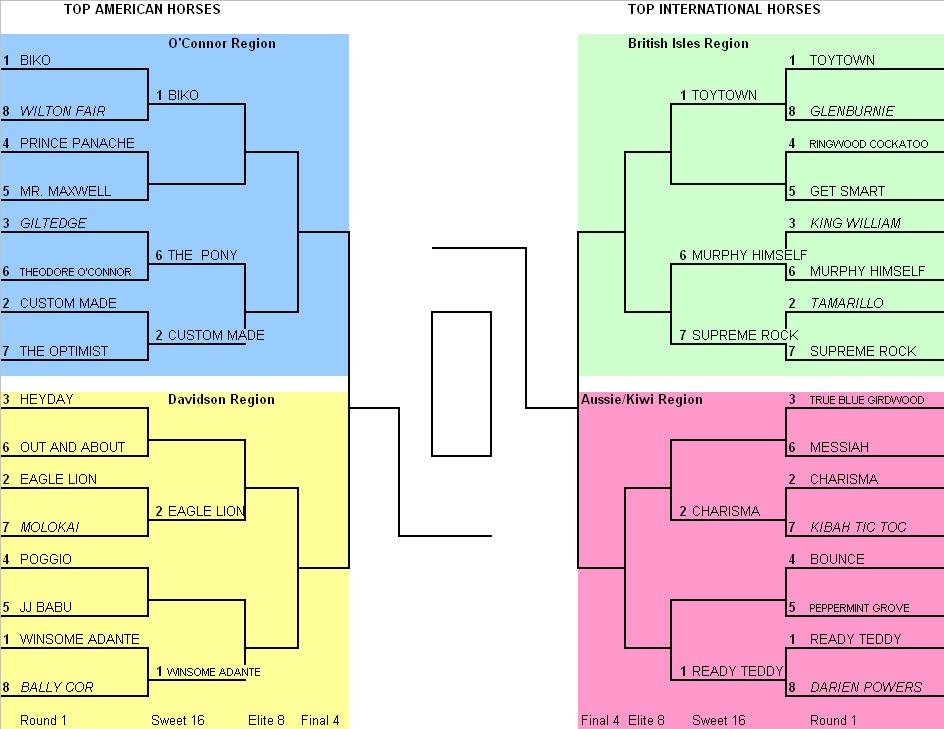