The ENCAA Bracket Battle gallops on with the 2 vs 7 seeds from the Davidson Region and the Aussie/Kiwi Region.  Eagle Lion meets his 1994 WEG teammate Molokai, in what could be a challenging duel.  On the other side, little powerhouse Charisma takes on Kibah Tic Toc.  The battles will be getting a little tougher as we work into the bracket, so choose wisely.  Vote for your favorite to send them on!  Sing your praises or grunt your grumbles in the comment section…noteworthy comments may be rewarded with extra votes toward a horse of your choice.

The Bracket met its first huge upset with (7) Supreme Rock knocking off (2) Tamarillo in a supreme beat-down.  We’ll see if he can keep this momentum when he meets the winner of (3) King William / (6) Murphy Himself.  On the American side, it was another ho-hum blow-out win for (2) Custom Made over (7) The Optimist.  Tailor will face (3) Giltege or (6) The Super Pony in the next round.

Eagle Lion wasn’t the flashiest of horses, and he may not have earned the most blue ribbons, but he has an incredibly solid, if not stellar, record.  With him, Bruce Davidson became the first American to win Badminton, in 1995.  The bay gelding backs this up with other top-5 finishes at Burghley (1993), Badminton (1994 and 1998), and a win at Fair Hill CCI*** (1992).  He completed Badminton four times with double-clear cross-country rounds; he placed in the top 15 in ten three- or four-star events in all.

A classic American Thoroughbred, Molokai was a force to be reckoned with on cross-country.  With Dorothy (Trapp) Crowell, he finished 4th at Radnor, was an alternate in the 1992 Olympics, and was selected for the 1996 team (but did not compete).  Mo’s biggest achievement is probably the Individual Silver medal at the 1994 WEG, where unfortunate time penalties on steeplechase (due to a sprung shoe) cost him the gold.  Mo closed out his career with a second-place finish in the first Rolex CCI**** in 1998; not a bad showing in front of his hometown crowd.

Charisma, ridden by Mark Todd, stood just 15.3 hh but towered over his competitors during his illustrious career.  Charisma was mostly thoroughbred (1/64th Percheron), and was nicknamed “Podge” because of his love of food.  As the story goes, Charisma had to have newspaper strips for bedding because he would eat anything else.  The pair first met while Mark Todd was working at a dairy farm and Todd felt pity because the horse was was so small.  Just a few years later, Charisma and Todd stormed onto the eventing scene with a second place finish at Badminton and then a shocking victory at the 1984 LA Olymics.  Charisma placed second again at Badminton (’85), second at Burghley (’87), and then dominated the 1988 Olympics, winning Gold by 10 points.  Charisma was the second event horse in history to win back-to-back individual Olympic Gold, after Charles de Mortanges and Marcroix (NED) in 1928 and 1932.  After Charisma retired, Mark Todd said “he is so tiny, I wonder how he achieved so much.”

Ridden by Matt Ryan, Kibah Tic Toc had a long and prosperous career competing for Australia, and saved the best for last.  Kibah Tic Toc placed 8th at Badminton in 1992 after knocking down 5 rails, but still earned a trip to the Olympics later that year in Barcelona.  With a rail in hand, Kibah Tic Toc left up every fence but the last, and won the individual and team Gold at the 1992 Barcelona Olympics.  This is especially impressive since Kibah Tic Toc was 17 years old at the time. 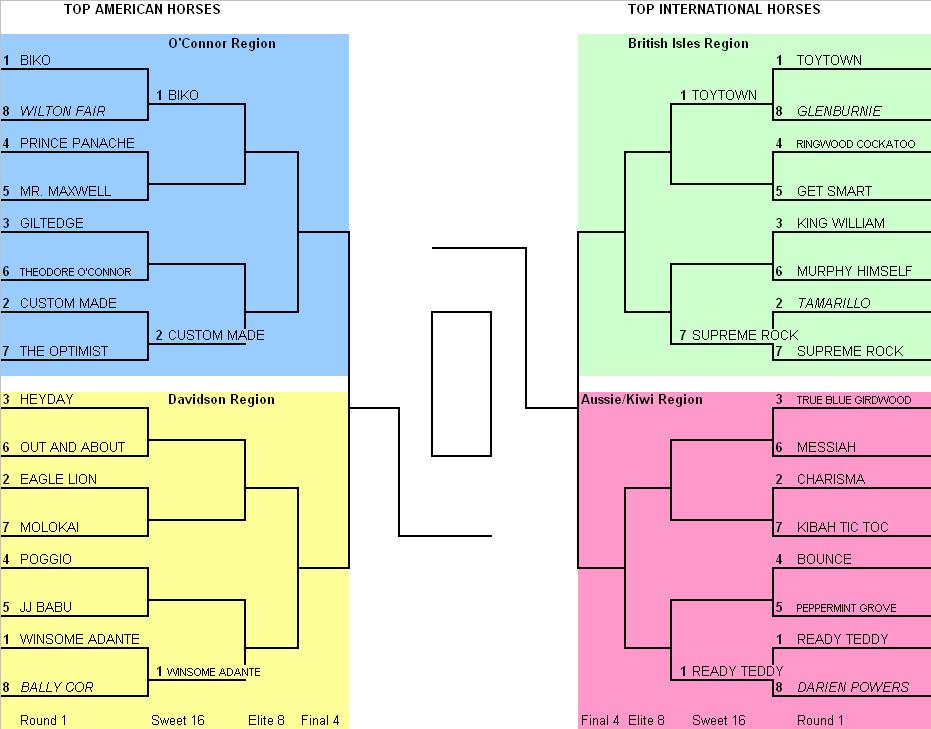