It was all chalk again, with both (3) seeds defeating the (6)s.  Out and About fought bravely, but Heyday moves on to meet his stablemate Eagle Lion in the Sweet Sixteen.  True Blue Girdwood dispatched Messiah, and will face a daunting challenge in Charisma next round.

From the valued poster “lec,” who knows anything and everything from the International side of the bracket.  Always insightful and worth reading her comments!

Messiah was an incredible horse. He was last after the dressage on 78.8 at Barcelona Olympics as he was lame and only had a shoe on mins before. A fantastic xc round and clear showjumping catapulted him into bronze medal and team silver. Messiah was terrified of water and it was only patience that sorted out this issue. Helso influence Blyth’s style in water jumps of very exagerated sitting back. The horse photographed is Ricochet.  Click here, Messiah is top left.

And, I just had to include this one from Anonymous:

By the way… DUKE really does suck.

(Anonymous, if you reveal yourself and are sincere in your agreement, I hereby award 50 votes to any horse of your choice!!)  [Ed note: I’m not sure we can do this legally, is that fair???] [John’s note: Sorry, Vis., but seeing as how Duke pumps out legions of highly ugly trained lawyers and investment bankers each year, I’m afraid of EN making too many enemies in high places.  Also, Duke really has nothing to do with horses, unless we are back to talking about the coeds… Ok, but really, Duke is a great school, I encourage all of our young readers to get good grades and join the chess club so that you can apply to Duke someday, and I might even apply to the Duke law school eventually, so I don’t really hate Duke.  Just their basketball team and their funny looking coach.] [Ed note: John, that’s horrible and completely irrelevant to eventing] [John’s note: get your own website Ed]

Mr. Maxwell was one of the early horses that put Karen O’Connor (then Lende) on top of the US eventing world.  Together, they won Rolex CCI*** in 1991, were 3rd Burghley CCI*** 1991.  Tragedy struck at Badminton in 1992 when the pair missed their line at the Vicarage Vee, causing a fatal fall for the chestnut gelding.  Karen remembers him as a senstive horse with a huge heart, and “such a great friend.”  [via Visions of Eventing by Elisabeth Furth, p. 8]

Considered by some to be the most successful German event horse of all time, “Cocky” was certainly one of the most talented.  When you combined one of the best eventing dressage riders on the planet with the best eventing dressage horse on the planet, the team regularly entered the weekends with leads exceeding five points.  Cocky won ten CCI and CIC 3*’s in his career, finished second at Kentucky in 2009, and won the Pau CCI4* in 2008.  Except for the controversial start/finish line ruling at Athens, Ringwood Cockatoo would have won individual and team Olympic gold.

Karen Dixon bought Get Smart as a four year old, and just three years later Get Smart placed 12th at Burghley as a seven year old in 1987.  Get Smart then competed at the Seoul Olympics, winning silver as part of team GBR.  Get Smart finished 6th individually four years later at Barcelona, and won individual Bronze and team Gold at the 1994 Hague WEGs.  Get Smart did 14 long format 4-star events, and retired when he was 18. 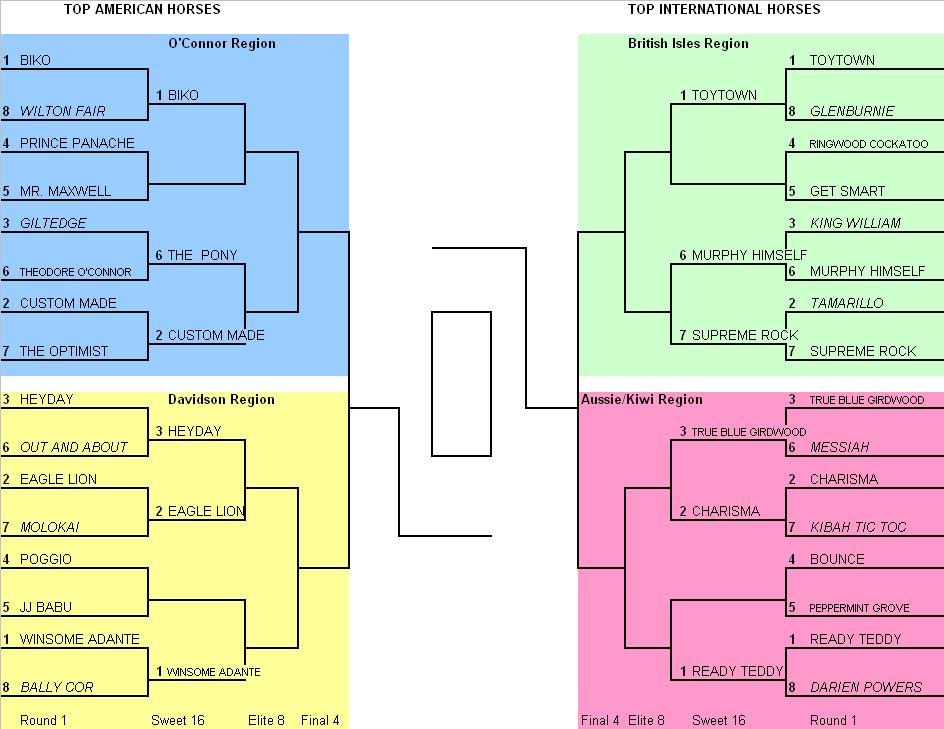