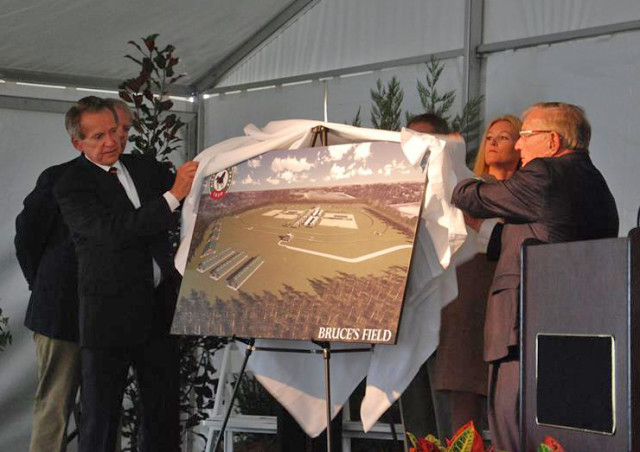 Bruce Duchossois purchased a 66-acre field and steeplechase track in Aiken nearly 15 years ago to save the land from development and preserve it as a location for what he hoped would one day become the leading equestrian facility in South Carolina.

Though he passed away in July before seeing that longtime dream become a reality, his family and friends are committed to seeing it through, with a groundbreaking ceremony held Saturday to signify the start of construction on the Aiken Horse Park.

Bruce’s father, Richard, and Jack Wetzel, chair of the Aiken Horse Park Foundation, unveiled the plans for the site, which include multiple arenas, a raised viewing area, vendor areas and derby fields. The facility will accommodate numerous disciplines from steeplechase to carriage driving, with the main area of the venue named “Bruce’s Field” in his memory.

“Bruce had a dream,” Richard said during the ceremony. “What he said was that, someday, we’re going to have an area that will help change back over to bring more horses back. But we will have the show horses. We’ll have every type of horse you can have. We’ll have all the equine activities. And, to a great degree, it’ll bring more and more people to Aiken.”

Construction on the capital improvements to the Aiken Horse Park will take place over the winter, culminating with the 49th Renewal of the Aiken Spring Steeplechase and the Aiken Charity Horse Show next year. The Aiken Standard published a nice story on the ceremony, as did Sidelines Magazine.

Thank you to Richard, Jack and all those involved in the Aiken Horse Park Foundation for your commitment to making Bruce’s dream a reality. We look forward to seeing the horse park hold events in Bruce’s memory for many years to come.