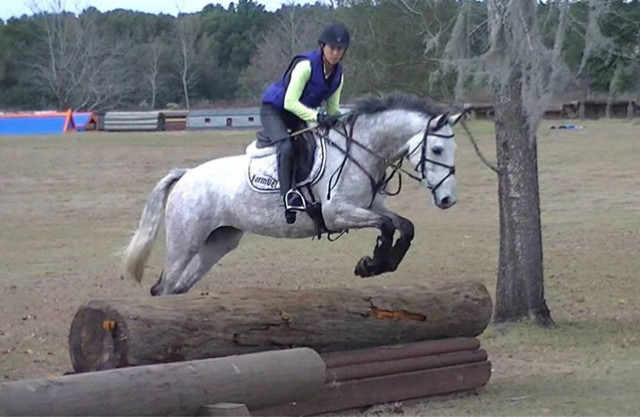 Buck Davidson pulled off a big wedding present surprise for his new wife, Andrea, with the purchase of Escariz du Rona, a 5-year-old Dutch mare they found at JP Sheffield’s barn in England. But that’s just the beginning of the story.

How exactly did Buck buy the horse without Andrea figuring it out? It all started in the spring when Buck began talking about selling Knight Lion, an 8-year-old Irish Sport Horse gelding he personally owned that had successfully campaigned at the Intermediate level.

“He really loved Knight Lion, and the horse was extremely talented. He had all the jump in the world. Buck would always say, ’This is going to be a top horse; I love him and love riding him,’” Andrea said.

So she was understandably confused when Buck decided to sell the horse. “When I asked him why he wanted to sell him, he said, ‘It’s just business. I have to sell him,’ but I was really kind of against him selling the horse because I knew how much he loved him.”

Buck ultimately sold Knight Lion to Sally Cousins in May, and that was that. A few weeks later, Buck and Andrea flew over to England, where they stopped at JP Sheffield’s barn in Leicestershire to look at horses.

“JP said he had a mare on the smaller said, and Buck said, ‘Perfect, pull her out,’” Andrea said. “So we looked at her, and Buck was saying he thought she would be perfect for me. But in my head, I was thinking, ‘I’m not in a situation to buy a horse.’”

Andrea rode her, and the mare was fantastic — “a beautiful mover and jumper with the attitude you want: super sweet and quiet.” They went back a second time to see her again, and Andrea said she kept thinking, “I’m not sure what we’re doing here. I love her, but I don’t know how this is going to happen.”

Buck kept saying the whole time that she had to have the horse, but never in Andrea’s wildest dreams did she think that actually might happen. They returned home to the States, and she forgot all about it.

“Then, suddenly, Buck was mentioning, ‘I decided to get her vet checked … She passed the vet check … We’re getting her … She’s your wedding present!’ And even then I thought it was one of his jokes,” Andrea said.

But when the mare arrived in the States a few weeks later and Buck told Andrea to come say hello to her new horse, she knew it was real. “It didn’t really hit me until I saw her in the barn, and he said, ‘This is your wedding present.’ That’s why he sold Knight Lion — because he wanted to buy me a nice young horse.”

Andrea said she’s incredibly thankful for such a wonderful gift. She and Buck decided to call the mare “Prim,” short for primrose, the yellow color they both wear on cross country. “We try to get horses in the barn that have really good brains and are athletic,” Andrea said. “So far she seems to be both.”

Prim is by the Belgian Warmblood stallion Quasimodo van de Molendreef, the well-known sire of Hello Sanctos, who won a show jumping team gold medal for Great Britain with Scott Brash at the 2012 London Olympics. She is out of Cadiz du Rona Z, who is by Carthago Z and out of a Voltaire mare.

Prim competed at a few BE90 and BE100 events with JP this season to start her eventing career, winning her BE100 class at Keysoe in August on a score of 29.5; click here to view her British Eventing record. Graham Gannon took some lovely photos of her competing at Homme House, which you can view here.

“She’s so easy going,” Andrea said. “You can put anyone in the barn on her. It will be fun to get to know her this season. I’m not in a hurry to rush her since she’s just coming 6. I’m looking forward to seeing where it goes.”

You can watch Andrea and Prim’s first cross country school at the Florida Horse Park below courtesy of EN’s good friend Thehorsepesterer. We wish Andrea and Prim all the best as they start their partnership in Ocala this winter.