EN guest blogger Katie Murphy and her husband, Roger, are building their dream farm in New Hampshire, and we’ve invited her to blog about the adventure. This first post detailed their year-long quest to buy the right property, the second post is all about putting in the ring and today’s post is about getting to know their 250-year-old home. Ask Katie questions about the process at [email protected]. Visit her website at www.murphyeventing.com. 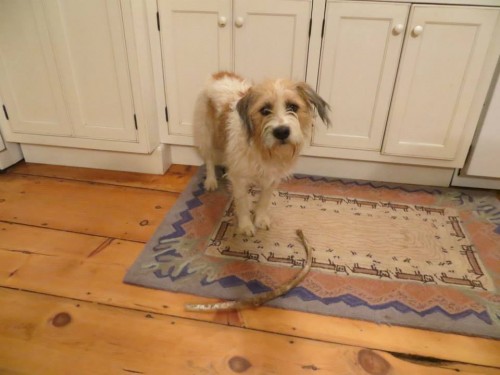 A rib one of the dogs unearthed.

We are getting to know our house. Our house is getting to know us. Day by day, Roger and I work to transform this antique Colonial house into our home. The house seems to appreciate our efforts, and we have been fortunate to find few problems we had not discovered during our home inspection.

Over the past 250+ years, many generations have worked to make this house their home, leaving subtle nods to their period of stewardship to be discovered by future owners. I love old homes. I grew up in a 1700’s cape. Though he grew up in an older Victorian, Roger was not familiar with “old” homes, their quirks and occasional tricks. Over the past few months, Roger and I have discovered many things about our home — some of which we still can’t figure out!

Within only a few months, we have learned a lot about this house. We are eager to uncover more mysteries, stories and history! I am excited for spring; Roger’s aunt, a Master Gardener, says we have more then seven kinds of roses on the property. Imagine what else lays dormant!

It may sound silly, but I think this home chose us. Or, was waiting for us. After the four other properties, offers and contracts that fell through, time and time again Roger and I were certain we would never find anything better then the last. Then came Autumn Hill Farm. Every time we enter our driveway and look up the hill to our property, we are amazed that we call this place home. I am astounded to think of the changes this house has experienced, and viewed, from atop the hill; a lot has happened in nearly 250 years. We are excited for our future, but we are humbled to be a part of the life, history and future of this lovely property.