Maren Engelhardt attended this year's Bundeschampionat, the official National Championship of the German breed associations, with eight visitors from North America. She's very kindly written a detailed synopsis, and today we meet the winners of this year's German Young Horse Championships. Many thanks to Maren for writing and to Stephan Bischoff for providing beautiful photos. 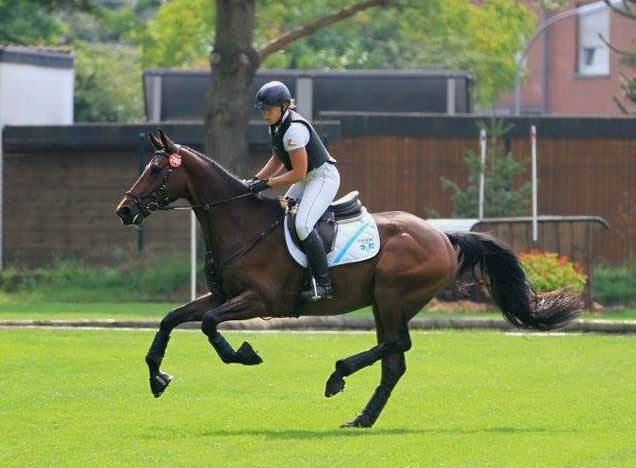 Collnischken demonstrates his gallop at BuCha. Photo by Stephan Bischoff.

After the long introduction to the Bundeschampionat in the first part of this series, you may wonder when you’ll read about horses. You do now! The winner in the 5-year-old Young Event Horse class was the gelding Michel, a Hanoverian by Mighty Magic out of First Lady by Federweisser – Gardeoffizier, with 37.5% English Thoroughbred in first four generations, bred and owned by Helmut Böttcher, ridden by Stephanie Böhe.

The gelding won mostly because he was the most consistent of the lot — 8.5 in dressage, 8.7 in show jumping, 9.5 cross country (which counts double), which let him win with a comfortable lead on a total score of 36.2 points. The horse impressed with his fluid test, flawless jumping round and a very practical, economic way of galloping and jumping around the tough course Click here for video of Michel. 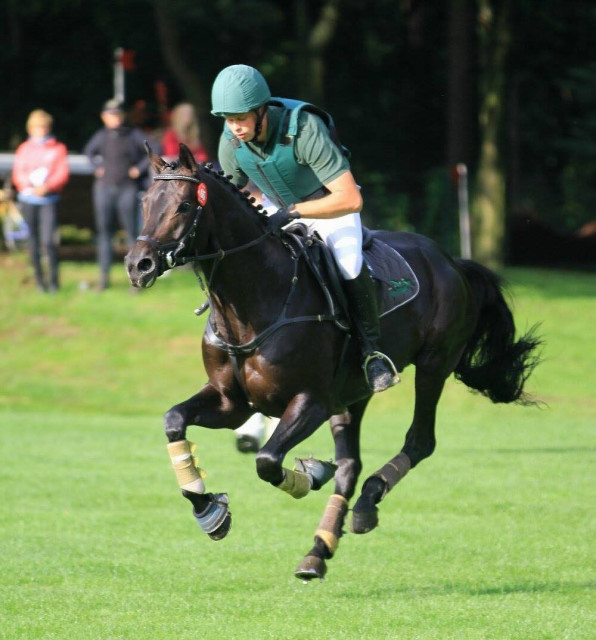 The silver medal was won by the stallion Black Rock H, a Westphalian by Black Jack out of Laroxa by Larome – Paradox I, with 12.5% English Thoroughbred in the first four generations, bred and owned by Hans Hoffrogge and ridden by Jens Hoffrogge. This stallion was an impressive horse by all accounts, maybe with a bit too much action in his monumental gaits, but with an exceptional jump both over stadium jumps and the cross country course and exemplary rideability. He scored 7.4 in dressage, 8.2 in stadium and 8.2 for his cross country round, finishing on 32.00 points. Click here for video of Black Rock H.

And the bronze medal went to Swedish rider Moa Kulla, who is stationed out of Peter Thomsen’s barn in Holstein, and the gelding Caramio, a Holsteiner by Canturo out of Krokus by Limbus – Caletto I, with 3.13% English Thoroughbred in his first four generations, but a noteworthy inbreeding to the Anglo-bred Cor de la Bryere, bred by Adelbert Sporn and owned by Hengststation Sollwitt GbR.

He received the same cross country score as Black Rock H, but came back from dressage with just 6.8 showing his true calling in the stadium round, which was good for 8.5. Again, he had a seemingly flawless cross country round, attacking the difficult course with the right mix of control, efficiency and energy. The judges made a special comment about his scope over jumps, which really made this course look small. 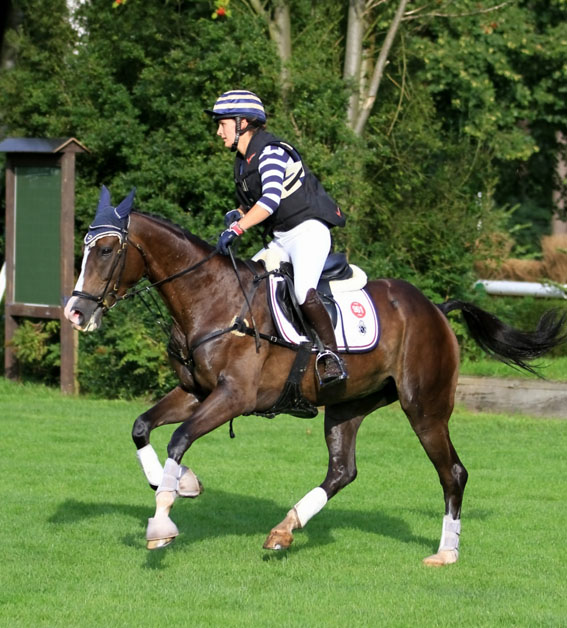 Interestingly, the horse that got us all the most excited in terms of pure run and jump quality for upper-level work retired on course after one refusal and the rider’s decision to call it a day. This was Zuckerpuppe (meaning “sugar doll”), a highly energetic dark bay Trakehner mare presented by Nina Schultes.

These two are still finding their groove, but the light-footedness, ease and speed with which this horse approached and cleared jumps was quite something. She had a distinctly different pedigree to most other horses in the finals, being by the Russian Thoroughbred Beg xx and more English and Arabian Thoroughbred in the background (62.5% direct blood in the first four generations). The difference in phenotype was striking. Click here for video of Zuckerpuppe.

In the 6-year-old division, the new Champion is Nobleman C, a Holsteiner by Nekton out of Odalis C by Candillo – Landgraf I, with 9.38% English Thoroughbred in the first 4 generations, bred and owned by Ursula Chojnacki and ridden by Moa Kulle again (this was clearly the year for Norway!).

Just like the 5-year-old winner, it was the consistency at a very high level that gave him the edge — dressage 8.5, stadium 8.8 and another whopping 9.5 for the exciting cross country round again produced a more than comfortable lead over the second placed horse. Nobleman C embodies the modern Holsteiner quite perfectly: He is a horse with good sport type and obvious athleticism that just impresses over jumps with power, scope and bascule without wasting too much time in the effort.

The silver medal in this division was won by the mare Victoria MB and once again Jens Hoffrogge, who is another rider that makes producing BuCha horses his business (successfully!). Victoria MB is a Westphalian by Vulkano out of Lalique by Lenz xx – Phoenix, with 28.13% English Thoroughbred in the first four generations, bred and owned by Maria Bruns.

Victoria MB was not only strikingly beautiful and a formidable jumper, but solved the questions on cross country with a certain level of finesse and quick thinking that really made her stand out. She scored 7.5 in dressage, 8.6 in stadium and 8.8 for her cross country round. Click here to watch video of Victoria MB. 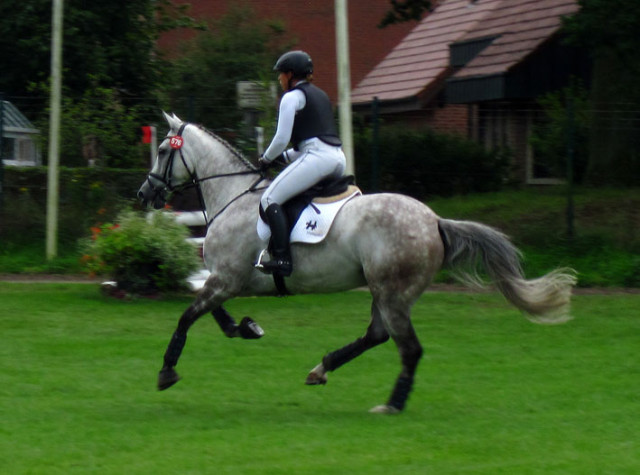 The bronze medal went to the only non-bay horse in the standings, the grey gelding Hulingshof’s Jogi, an Oldenburg by Clinsmann out of Aegina xx by Goofalik xx – Lagunas xx, with 53.13% English Thoroughbred in the first four generations, bred and owned by Johannes Baumann) with Christin Tidow, who already produced this horse in the 5-year-old finals in 2014.

The routine and experience showed — this horse never set a foot wrong and is again an exceptional jumper that one can picture anywhere from here to Rolex. This pair received 7.7 in dressage, 8.4 in stadium and took home an 8.5 for the cross country round. Click here to watch video of Jogi.

And like before, this division also had examples of horses that anyone of us standing by would have snatched up in a second as a serious upper-level horse, but that didn’t have the best of weekends in Warendorf this time. Two black mares really impressed with outstanding gallop and jump: Butt’s Azahar, a Hanoverian by Chico’s Boy from the famous Butts lineage of eventing greats.

The dam here was by Heraldik xx – Sir Shostakovich xx – Star Regent xx, combining some of the best event horse sires in Europe of the past decades). Presented by Anna Siemer, the mare is bred and owned by Dr. Volker Steinkraus who keeps the Butts legacy alive. Click here for a video of Butt’s Azahar. 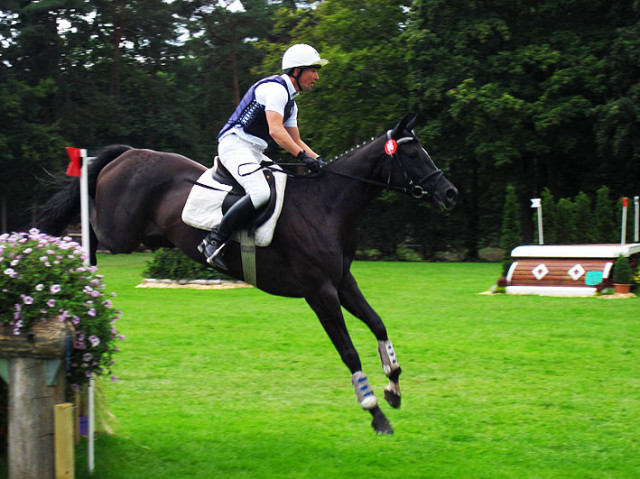 And the other striking horse was Betel’s Bella, a Mecklenburg by Betel xx – Lateiner, ridden by Andreas Brandt. Both mares placed in the finals, but didn’t medal. Click here for a video of Betel’s Bella.

You can watch more videos of this year’s BuCha finalists on the German Champions YouTube Channel. Stay tuned for part three in this series: American impressions of BuCha! Click here if you missed the first part of this series.