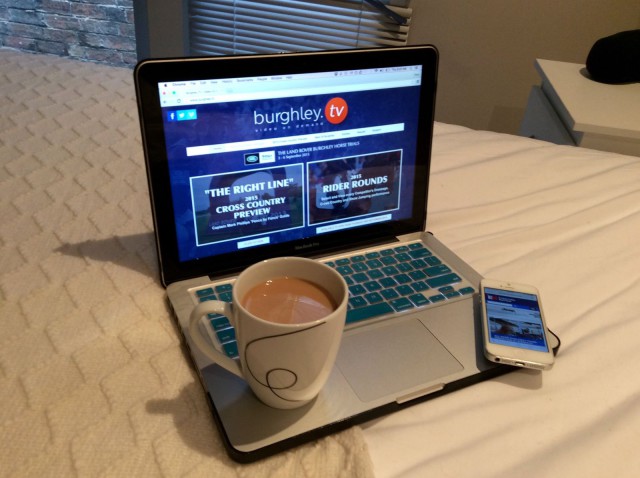 Ah, Burghley weekend, just one of the five weekends a year (sorry Adelaide, I’ve never been committed to watching you — but now that I’m living in Australia I should probably add that to my roster) I get to curl up on the couch and be totally ok with not leaving the house for days at a time.

Watching the four-star events has been a ritual for me over the past few years since convincing my mom an FEI TV subscription was necessary for my ‘eventing education.’ Pro-tip: this is great phrase to use when convincing your parents (or even spouse) about the necessity of spectating at an event or staying antisocial and completely glued to the laptop for days at a time or writing off any large horse related expense.

My mornings begin like this: setting alarms at unreasonable hours (but we’re all already used to that), making a cup of coffee, and carefully balancing the laptop on my stomach with my phone in hand to check a twitter feed or chat room commentary. This year, I have welcomed an iPad into my repertoire which makes my spectating next-level. Ironically my horses end up often getting light work days (or not working at all, especially on cross country day) when I’m in my full-blown four-star trance.

As you may know, Burghley doesn’t have live streaming so it does take a little of the excitement out of it. However, the videos are usually quickly up there on Burghley TV.  I’ll already know the results, but just having the chance to watch these rounds in action at all is amazing.

For Christmas in 2010 I was given the WEG Cross Country on DVD by my trainer. I kept the CD in my laptop and would sit in the library between classes studying each round and memorizing it by heart. My favorite ride was Clarke Johnstone and Orient Express; I was just so impressed with how easy they made a World Championships track ride.

I have some great memories from this peculiar habit (which honestly is no stranger than how the whole USA shuts down on Super Bowl Sunday). I stayed home from school to watch Mark Todd win Badminton in 2011. I also have probably watched Boyd and Neville’s cross country round from when they finished 7th at Burghley in 2011 hundreds of times.

That year had been full of personal tragedies in my own life (not to mention all things that went down for Boyd and Neville) and that partnership proved both the healing powers of eventing and how hard work above all pays off. I’ve also seen some memorable disappointments, and unfortunately there tends to be a lot of those.

One memory that was particularly unsettling was Ben Winter’s fall at Luhmühlen 2014. I was actually watching the live stream on my iPhone as I was brushing my teeth in a hurry to get to the barn. It wasn’t until a couple hours later when i was hacking that I learned Ben had passed. When watching a four-star you see the highest of highs and (rarely) the lowest of lows. Each little event stands as a metaphor for life itself.

And now we have the ability to watch eventing at the highest levels over every fence and flying change. I remember as a kid having to go to the local tack shop and buy the VHS recordings usually months after the competition ended.

Even then you got just short, edited ‘highlights’ of the competition (something akin to the abomination that is the NBC sports abbreviated coverage of Rolex pre-Kentucky derby—you all know what I’m talking about). Now we’ve reached an era where the internet is brimming with eventing coverage.

Sometimes I wonder if with all of the eventing media more people turn to the shortened journalistic coverage rather than  the real thing. Watching these rounds is the educational experience—not the 500-word summaries.

I hope you will get a chance to watch some Burghley too, and I will probably be struggling with the terrible wifi here in Australia. With the time difference it will actually be appropriate for me to follow Burghley coverage with a glass of wine—and that’s worth cheering about. All we can hope for is a weekend with good weather, safe rides, and some new eventing history.