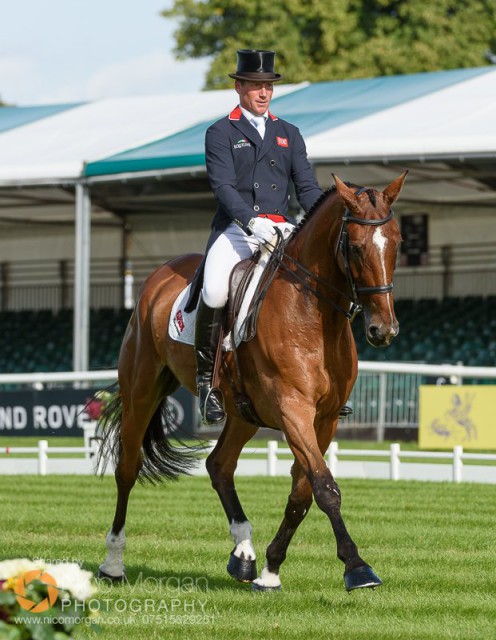 Oliver Townend was fourth in the arena this morning on the first of his three rides at Land Rover Burghley Horse Trials. Matt Ryan asked if he’d like to finish one, two, three (duh!) and he replied that he liked all of them pretty much the same although perhaps MHS King Joules is the greenest, and that Andrew Nicholson might get in his way on Nereo.

On Dromigurrihy Blue’s test, which scored 50.7 to sit just inside the top 10:  “It’s improving all the time in terms of his work but there were a few mistakes that crept in that probably shouldn’t have at this stage, but that’s dealing with horses and animals, and his strength isn’t dressage, hopefully it’s cross country and that’s what we’re here for.

“I don’t get particularly nervous anymore, it’s more excitement, I feel very comfortable in the dressage arena these days and I enjoy doing it more and more as the horses have got better and better, and hopefully this is an okay start to a positive week.

I’ve been out to see the course — definitely tough enough without any shadow of a doubt and there are a few things out there that you wouldn’t know how the horses are going to read them. It’s a proper Burghley test and obviously the terrain here is very special which is what makes it the toughest event in the world.

“I think Burghley is one of the best events in the world in every way, shape and form, the atmosphere’s always great, we’re coming towards the end of the season which has been a very long one and everybody’s just a little bit more relaxed. To say it’s a four star but at the same time it’s still the biggest test in the world.” 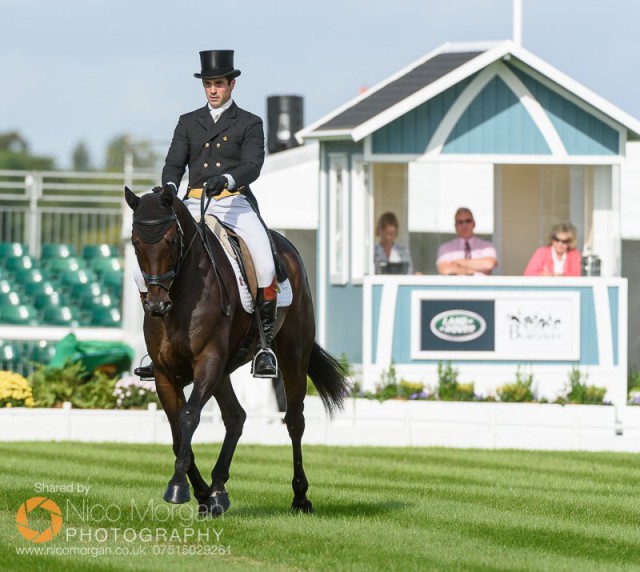 Ben Way has his Badminton top-10 finisher Galley Light here hoping to complete Burghley after a fall last year. They scored 59.7 to sit inside the top 20 currently. Ben has been working with Ruth Edge on the flat for about a year. “All the horses’ work has improved massively, but for Galley Light here it’s great having a trainer who’s been here, ridden round here, knows the atmosphere.”

He’s also brought along stablemate Willows Tipster, who of course was his partner at Great Meadow International as he’ll be contesting Blenheim with him next weekend and needs to keep him ticking over. “He travelled back amazingly well, he coped with it brilliantly.”

Another of our Great Meadow International GB team members Ros Canter is here at Burghley this week on the lovely Allstar B and once again rose to the occasion to move into third place right behind Elisa Wallace on a score of 47. This year Ros said the pressure was on after her good performance in 2015.

“It’s just as exciting as it was last year but there’s definitely a bit more pressure that you put on yourself, and I am coming here hoping to be a bit more competitive instead of feeling my way around just wondering if I can even get around. The horse is really consistent and he generally does do really good tests; last year’s was exceptional and I had it in the back of my mind that I’d be lucky to pull off another one of those, everything just worked perfectly that day and it hasn’t quite gone that way today.

“He’s still done a really good test but there were a couple of things I’d like to go back in and have another go at, but I’m really pleased with him. I really enjoy the dressage and I love working on it and improving a horse on the flat, but it wouldn’t be his favourite phase. He’s a big lad and he isn’t naturally forward thinking on the flat particularly when he gets into that arena so it is something that he would find a little more challenging but he’s got a lovely brain to work with and he’s always giving his best.

“The nerves will definitely kick in on Saturday, I’ve had a walk of the course, I’ve looked at all the straight routes and this year I’m determined to give it a good shot, we’ll try our best.” 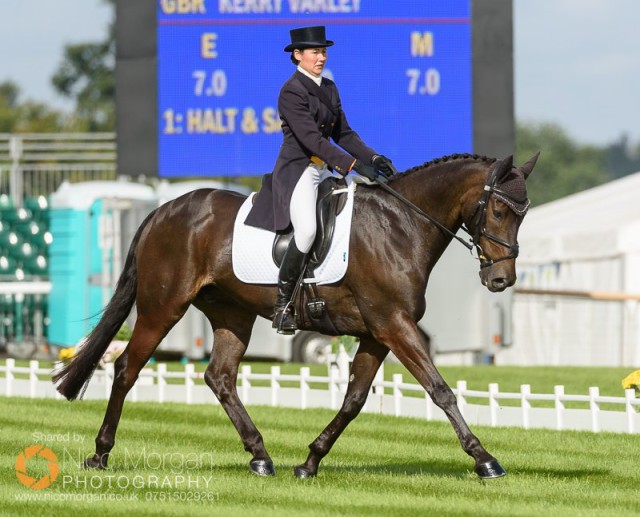 Kerry Varley is a local rider from Stamford coming back for her fifth attempt at Burghley; she completed for the second time last year. Her horse Bluestone Luke came for the first time as a 9-year-old, missed one year, and is now back for his fourth consecutive attempt. This means Kerry’s become accustomed to constantly being hailed as the girl from down the road!

“So many people know who we are and I haven’t got a clue who they are! They all wish me luck and know my name and Luke’s name, and I have no idea and feel a bit rude sometimes, but local companies and businesses have emailed and asked if they can wish me luck in their newsletters so I definitely have a following.”

Kerry was holding ‘Luke’s Berry Pony,’ a relative of Wilberry Wonder Pony, after her test, which scored 67.4. “We’ve called him Whoaberry, purely because I spend most of my time getting Luke to try and slow down! I’m taking Whoaberry around with me this week to try and raise awareness for Hannah Francis’ charity.” 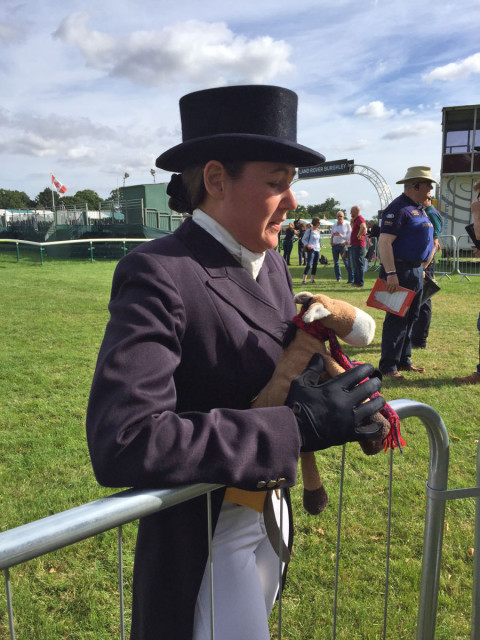 Kerry Varley and Woahberry after her test. Photo by Samantha Clark.

Tim Price was pleased with Bango’s score of 49.5, and although this is the horse’s third CCI4* he still considers him very much a developing horse with a big future ahead of him. “While it wasn’t a winning test today I know it will be one day, it was on the right track.

“What you lose with a horse like him in this stage of his career in the dressage you gain back in the jumping because he’s a really natural jumper, he can gallop all day long, super bold and scopey. I’ve always thought of him as a good horse for coming here to Burghley so hopefully we have a good day on Saturday and then be tidy on Sunday.”

Tim was second here last year on his second horse Ringwood Sky Boy and he told me earlier this morning that he’s pinning his hopes on going one better on that horse. Ringwood Sky Boy ran round Rio for seven minutes, the equivalent of a CIC3* before slipping on the flat, and Tim reported that he returned to England with more weight on him than when he left. 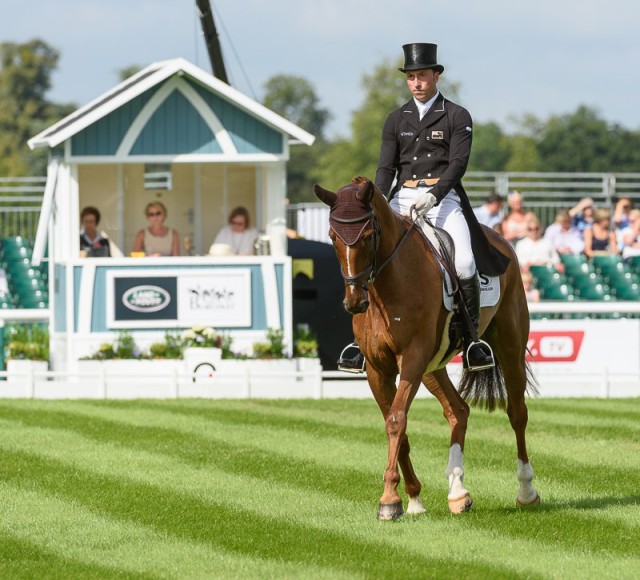 He plans on setting off on cross country a little slower on Bango than in Kentucky and giving him time to get used to the 12 minute course, and he’s looking forward to riding Sky Boy second, acknowledging that he’s taken a few knocks this year and it’s a good feeling to come back to a place where it’s gone well on a horse that has a good history here, plus there’s no place like Burghley.

“Burghley is like the holy grail of what we do. It’s a nice time of year, it feels like we’re wrapping up a little bit, it’s like coming to the home of eventing, the place is just so perfectly laid out for this sport, the whole thing is such an amazing experience and the back drop of Burghley House, it’s pretty cool! It’s all about compiling three good scores and carrying it through until Sunday and that’s the beauty of Burghley, it’s not a dressage competition or any one of the phases, it’s about putting it all together and coming out on top on the last day.”

Until then though, we’re all concentrating like crazy on the dressage and as pleased as punch of course with Elisa Wallace and Simply Priceless, who are still holding second place at the Land Rover Burghley Horse Trials. Looking forward to Bunnie Sexton and Rise Against at 4:10pm (11:10 a.m. EST) when we’ll bring you a full report and a wrap up of our day then.