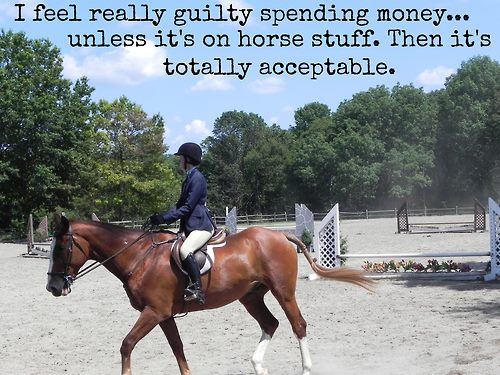 “So, I bought a dressage saddle,” I texted Boyfriend. I had just loaded my precious cargo into the backseat, and figured I owed it to him to let him know why we might not be able to afford next month’s rent.

I breathed a sigh of relief. Good — he wasn’t going to ask me how much it cost. I was in the clear!

A dressage saddle had been at the top of my shopping list for a long time. I’d done plenty of research and comparison between brands and models and spent countless hours drooling in the saddle section of my local tack shop. The price tag was always a deterrent, but I was determined to save enough money to buy a saddle that fit my horse’s back and my rear end like a glove.

As fate would have it, there was a local tack swap that weekend. I had no intention of buying anything (yeah, right), but I somehow found myself drawn to the saddle section, squeezing through the jostling crowd in a trancelike state. 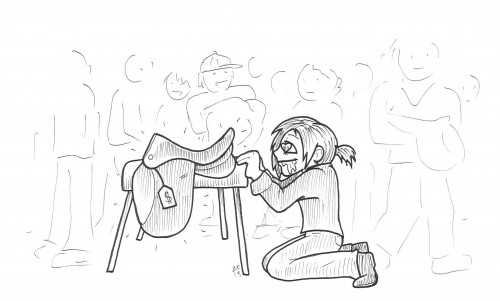 I found it. It was a used saddle, yes, but in terrific shape. It included stirrup leathers, a cover and adjustable gullets so I could find the right fit for my rotund pony. Also, when I sat in it, my butt was so happy that I felt like breaking out into song and dance. It was meant to be.

Despite my starry eyed moment of shopping kismet, I wanted to be absolutely sure that dropping nearly a paycheck’s worth of money was worth it. I hemmed and hawed, walked away from the saddle and came shooting back like a rubber band. Yep, that thing was mine.

As I carried it lovingly through the checkout line, the conscience that’d been beaten down by years of tack and horse shopping chirped its tiresome warning in the back of my mind. “What were you thinking?!” it demanded. “You don’t need this! Just wait. You’ll regret it.”

“Nope,” I thought, prodding my conscience back with the bedazzled riding crop I’d also purchased. “I’ve been looking at this saddle brand for months. It’s in like-new condition, and it cost half of what it would’ve cost new. Plus, it’s shiny! I like shiny things. And think of how cute Onyx will look all spiffed up in his new saddle!”

“Well, when you put it that way …” my conscience grumbled, defeated once more. 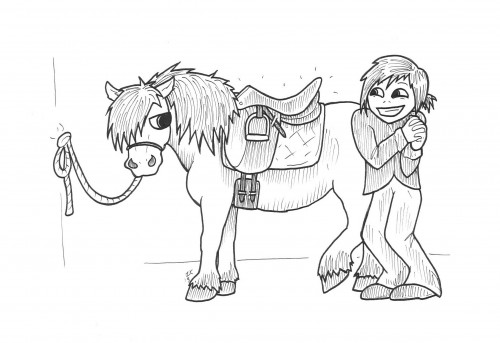 It’s true; my horse did look mighty snappy in his new saddle. I half expected the buyer’s remorse to kick in with a vengeance as I wiped the saddle down and put it in the tack room; thankfully, all I could think about was what saddle pad colors and patterns I could find online that night. My only fear was that poor Boyfriend would go into cardiac arrest if he found out how much I’d spent on my fancy new toy.

“No, not a toy. A tool,” I corrected myself. “A practical, necessary tool for training and competition. There’s nothing frivolous about it.” With that, I drove home, still basking in a satisfied glow.

But later that evening, Boyfriend asked me the question I had been dreading since that morning.

“So … how much did that saddle cost?” 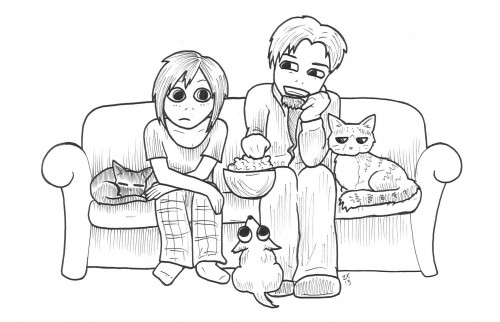 I was a deer caught in the headlights of truth and fiscal responsibility. Thinking I was being crafty, I first told him the saddle’s retail price, followed by how much I paid for it used. “It cost half of what it would’ve cost new!” I proudly proclaimed.

Boyfriend isn’t stupid. “You just told me the retail price first so I wouldn’t be shocked by what you actually paid for it, didn’t you?”

But before I could say anything, he continued, “I get it. We both have expensive hobbies. My computer’s graphics card cost a lot, even though I nabbed it on sale. If it’s something that you’ve wanted for a long time and you can afford it, go for it. Horses make you happy, and nothing would make me happier than seeing you sit comfortably in a gleaming saddle as you and your horse half-pass your way to glory.” *** 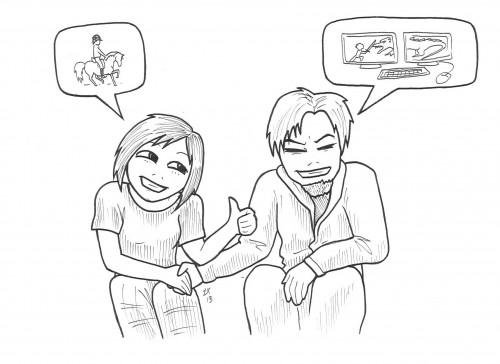 While not a horsey person at all, Boyfriend has always been supportive of my expensive hobby. He has put up with countless hours of verbal analysis of jumping courses, training methods and cross-country helmet cam videos, not to mention my childlike squealing over cute ponies and tack catalogs. And now, when faced with a price tag that would make any sensible person’s blood freeze, he proved that he is quite insane (in the best possible way).  In short, I’m a lucky lady. I think I’ll keep him around a while.

*** Okay, so the last sentence may be slightly exaggerated. But I’m sure that deep down, he was thinking it.