Half a decade ago, The Fork was the final destination for almost every Kentucky-bound pair, offering a preview of who was really reaching peak performance prior to the late April event. With the addition of so many other options, the competition has largely split. However that doesn’t mean we won’t see some brilliant performances this weekend; several top contenders have chosen this venue as their final prep run, likely due to the similarity in atmosphere between the stadiums. Tryon offers a setting that rivals Kentucky for sheer spectacle and helps prepare a fit horse for what he might see in the Bluegrass in a few weeks.

Since The Fork relocated to Tryon in 2017, there has only been one pair for all of the Advanced and 4*-S divisions to finish on their dressage score, and not one winner has done it. Phillip Dutton and Z came the closest in 2018, adding only one second of cross country time to their dressage score en route to the 4*-S win in 2018, while Tsetserleg TSF and Boyd Martin won in 2019 thanks to having the fastest cross-country round with only 12 seconds over optimum time.

The winners of both the Advanced and CCI4*-S here have never had a single stadium rail, with the 4*-S winners adding nothing at all to their score in the stadium phase. All of the winners have also been within 16 seconds of either the optimum time or the fastest pace of the day, but their dressage ranking has mattered less; winners of these divisions have varied from 1st to 10th after dressage.

Boyd Martin and Tsetserleg TSF return as the only pair to previously win a division at this venue, having won the most recent running in 2019. Liz Halliday-Sharp paired with her experienced Fernhill By Night to win an Advanced division in 2017, but instead brings Deniro Z and the green Cooley Moonshine out to play this weekend.

It’s not often we get to see Mai Baum put on his dancing shoes and it’s been even longer since Tamie Smith last competed him on the East Coast…since the fall of 2018 in fact. Competed conservatively during 2020, Tamie conserved this talented horse for his first 5* start this spring and a further eye on the Tokyo Olympics. Mai Baum has only gotten better with age, with a 2020 average of 18.8 bettering his 2019/2018 average by nearly 7 points.

Mai Baum will be very difficult to beat, but one of the few horses to top him on the flat is his stablemate Danito, also ridden by Tamie Smith.  The striking chestnut sits on a career average of 24.8 in seven starts at the level, and bested Mai Baum last summer at Galway Downs. Yet another flashy chestnut who will be contesting for the top is Mai Baum’s Pan American teammate Starr Witness, ridden by Doug Payne. This mare has been extremely consistent since her debut at this level at the beginning of 2020; she has scored 70% or better in each of her six starts at the level thus far. 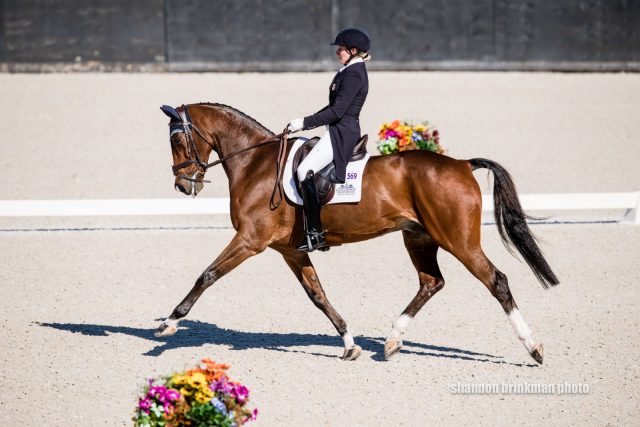 Yet another Pan American horse, but this one far more experienced, will also be right up in the mix. Tsetserleg TSF has a two year A/4* average of 27.0 penalties but Boyd Martin made sure the horse did his homework during the competition break in 2020 and came out swinging, averaging only 25.4 penalties in his two 2020 starts. Meanwhile, Deniro Z and Liz Halliday-Sharp spent most of the fall 2020 season racking up wins, proving that the horse has come into his own on the flat. In five 2020 starts, Deniro Z broke the 75% mark in three of them, and scored no worse than 27.5 overall.

Doug Payne has another heavy hitter in Vandiver, who hasn’t scored less than 70% since 2019, and twice exceeded the 75% mark in 2020 for the first time in his career. Wizzerd and Matthew Flynn round out the pairs most likely to score in the twenties; in five starts in 2020 and 2021, they’ve laid down sub-thirty tests all but once.

After stadium, most of the top five should stay in the top five, but with a bit of a scramble in the order. Two of the potential top five horses, Vandiver and Danito, are more likely to have a rail than not. Since 2018, Vandiver has had a rail in 70% of his 4*-S stadium rounds when cross-country was held last, while Danito has a 50% clear rate at this level but five total rails overall out of six rounds. Both of these horses may have enough cushion after the first phase to maintain a top position despite a rail but will likely drop a few placings. 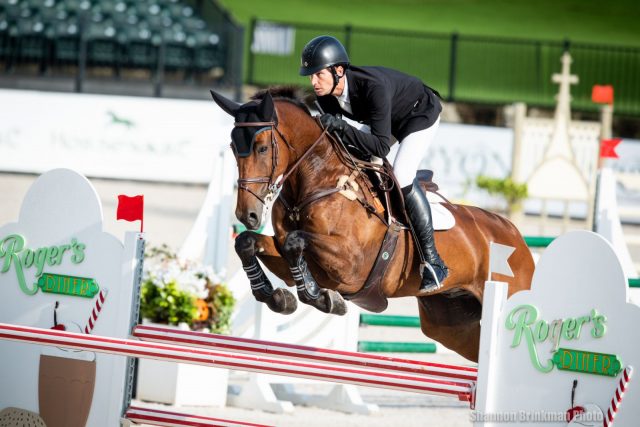 Meanwhile, Mai Baum hasn’t had a rail in a short format since 2015, Deniro Z has jumped clear in 9 of 10 A/4*-S rounds dating back through 2019, and Wizzerd hasn’t added anything to his dressage score in four ’20/21 starts. Starr Witness has incurred rails in only one of her six starts at the A/4* level and although Tsetserleg TSF averages half a rail in his career A/4*S starts, he hasn’t had a rail in four A/4/5* starts dating back through 2019.

Other horses to keep an eye on in this phase are Quantum Leap, Vermont, Miks Master C, and QC Diamantaire. 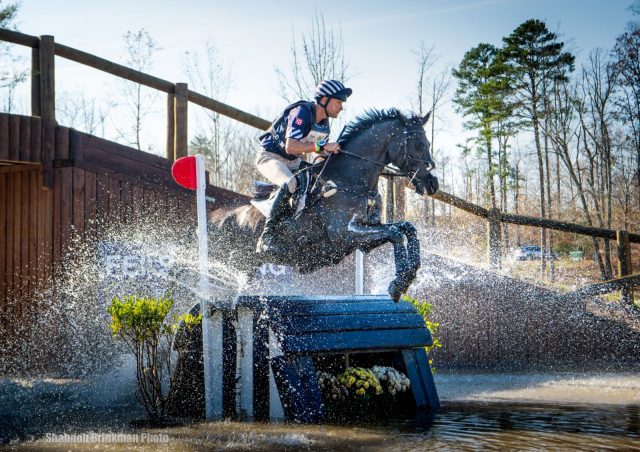 Tamie Smith is not one to dawdle on cross country and on Mai Baum, she has the ability to turn and burn as she’d like. With the fastest speed rating in the field, this horse will be right up with the fastest pairs, if not the fastest, on Sunday. Liz Halliday-Sharp has been on a mission with Deniro Z and has made the time in her last two 4*-S runs with him with runs that were near the top of the field in terms of pace. Tsetserleg TSF hasn’t had a lot of runs to stretch his legs in the past couple years but he hasn’t needed to; in his last 4*-S run, which was at this venue two years ago, he posted the fastest round of the day and followed that up with a round inside the time at Kentucky.

Both Danito and Vandiver should bounce back in this phase even if they do incur a rail in stadium. Doug Payne posted the second fastest time of the day last fall with Vandiver at Blue Ridge here at Tryon and followed it up with a round at the Tryon 4*-L only one second over the time. Danito might be a touch off the pace of the leaders but not by much; when going clear across the country at the 4*-S level, he and Tamie Smith average less than 10 seconds off the fastest pace.

Other horses to watch in this phase who could creep up into the top ten based on speed are Voltaire de Tre, Miks Master C, Quantum Leap, and QC Diamantaire. 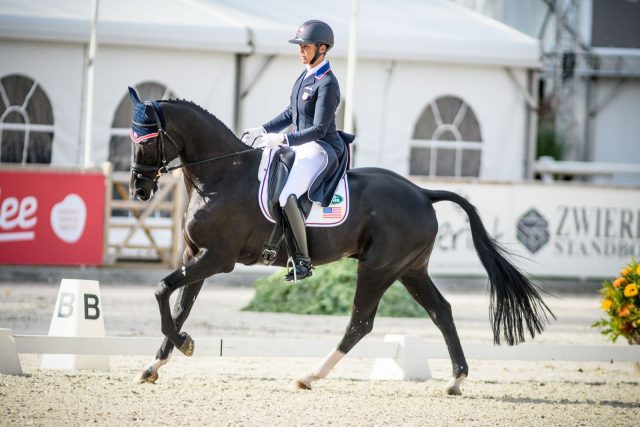 Mai Baum is extremely hard to bet against, based on his record. He has won 8 of his 10 career starts at the A/4*-S level, and never finished worse than 4th. Between his strengths in dressage and stadium, he should have a significant cushion headed into the final phase and even if he doesn’t, he owns the best speed rating in the field. 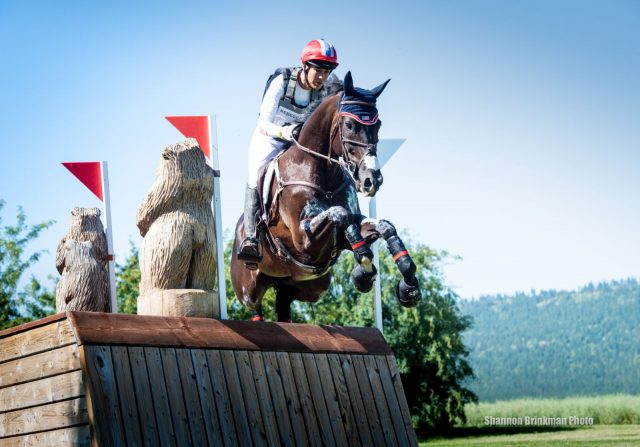 As mentioned above, Mai Baum also owns the fastest speed rating in the field but you wouldn’t know just by glancing at his record; he has never made the time at this level and format. The reason for that is that in only three of his starts at A/4*-S has anyone in the field made the time, meaning that in seven of his starts, the entire field posted cross-country time penalties. That is when this horse seems to excel, posting the fastest pace in four of those seven runs, and coming in at only one and four seconds over the fastest pace in two others. Since this venue is incredibly difficult to make the time, the field is set for this horse to do what he does best once again. 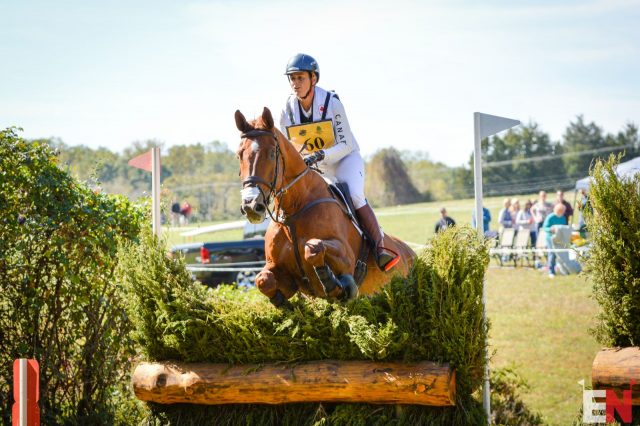 Vermont continues to be a horse to keep an eye on for the future. Colleen Loach has brought this horse on carefully and after three starts, the pair has an average of 30.7 in dressage, has incurred only one rail in three rounds, and a speed rating of less than 20 seconds slower than the fastest pace. 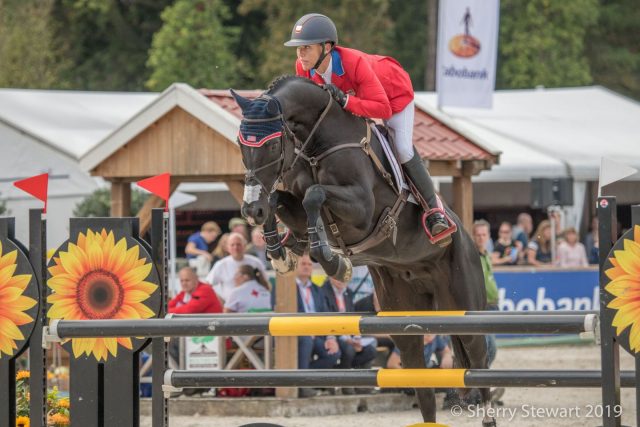 Tamie Smith and Mai Baum also happen to own the longest clear jumping streak in the field at the A/4*-S level; they’ve jumped eight consecutive clean rounds at these levels. 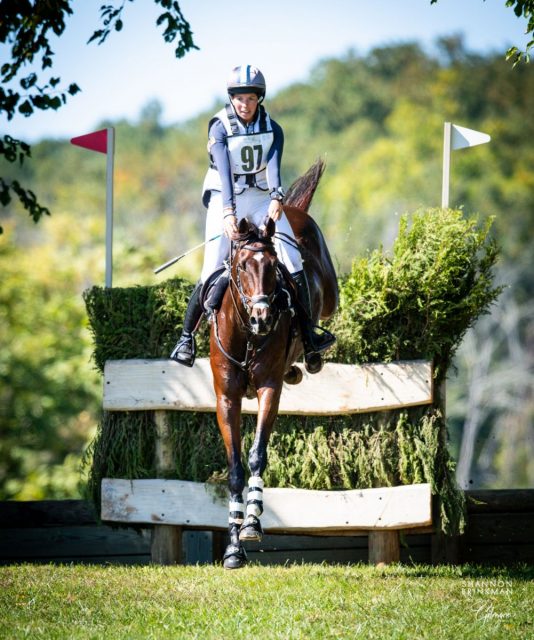 Keep an eye on  Meghan O’Donoghue and Palm Crescent to climb the leaderboard; these two have significant strength in the jumping phases and a likely clear stadium round paired with a cross-country round within 20 seconds of the fastest pace should propel them up the ranks throughout the weekend.

Dressage and show jumping take place on Saturday, with cross country held on Sunday. Sadly, there is no live stream but keep your eyes locked here for all of our coverage!