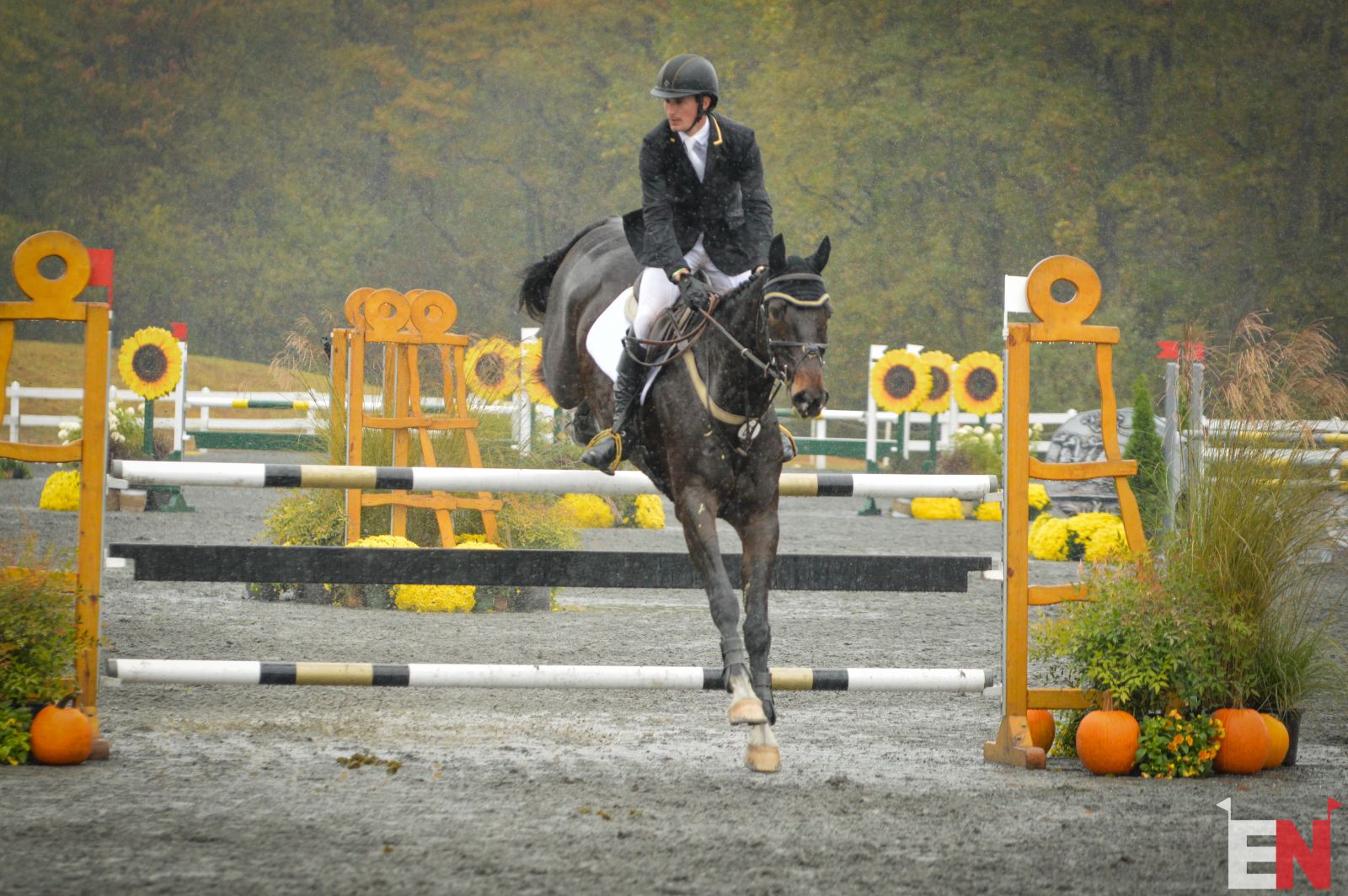 It wasn’t clear to me until the cross-country how excited I truly was to have a long day of live-streaming ahead of me, filled with the size and type of field you normally only see at Kentucky. The ultimate goal of U.S. eventing needs to be to fill every 4*-L and 5*-L in North America with as big and quality fields as this one; hopefully the population of Advanced riders in this country are busy expanding their strings and working on maintaining their top campaigners for many years.

The cross-country phase was certainly influential yesterday, but ultimately the biggest concerns regarding the footing in the end seemed unfounded; the grounds crew at Tryon made a herculean effort to get the turf as good as possible, and primarily succeeded.

Ultimately, 69 pairs started the course and 73.9% finished, a touch lower than the five-year world-wide completion average of 76.8% for this particular division. 62.3% of the field finished clear with no jumping penalties, a touch above the clear rate at 4*-L and 13.0% finished inside the time, which is almost exactly equivalent to the worldwide average of 13.4%. These averages indicate that the distribution of penalties across the field is consistent with a typical 4*-L.

The fastest time of the day was ultimately put in by Ariel Grald and Leamore Master Plan, who came home 18 seconds under optimum time. Nine pairs ultimately made the time, although one pair was also assessed a flag penalty that remains at the end of the day.

As always there are a few horses expected to be influential on the final day who ended up well down the running order today, if not completely out of the event. C’est La Vie 135, QC Diamantaire, and Carlevo are all unexpectedly well-placed yesterday after strongly exceeding their pace expectations. Leamore Master Plan also took advantage of his newly found flow to also jump up into the top ten and be in a better position to capitalize today.

Chris Barnard has been the stadium course designer at this venue since its inception, and will continue to be the designer for this weekend. As a frequent designer for venues all up and down the East Coast, most riders will be very familiar with his style of courses. This venue also has a large number of rings to choose from for the stadium round, and therefore even though a pair may have jumped at this venue before, they may not have done so in the same ring.

It should hardly be surprising to hear that in this particular field, we have a high number of extremely good jumpers, with 29.4% of the remaining pairs expected to jump clear. More surprisingly is the fact that in the remaining top ten, only four pairs are expected to jump clear. This leaves significant room for improvement for any pairs who put in clean rounds today.

It’s nice to see an experienced horse like Carlevo put his best foot forward and deliver a personal best speed rating for the 4*-L level yesterday; as consistent as he’s been at the level, the speed has always been the thing that has caught him up. Now he and Buck Davidson can look forward to the stadium phase, where this horse is particularly strong; in five completions at the 4*-L level, Carlevo has had only one rail. 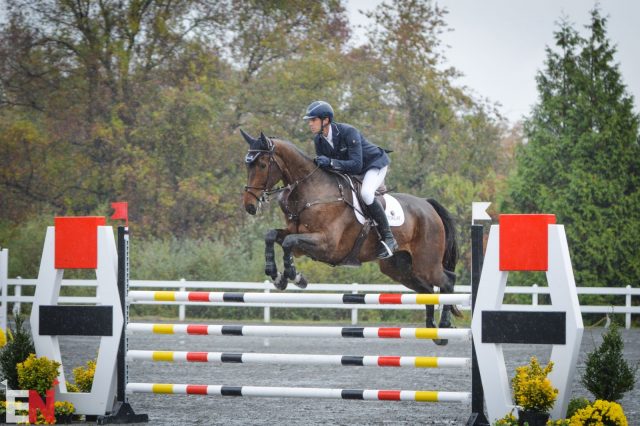 DonDante has been quietly developing under the tutelage of Will Coleman for the past two years, and for the second year in a row he shows his jumping prowess is particularly valuable in the long format. Sitting just outside the top ten, this pair is extremely likely to put in a clear round; they’ve jumped clear in seven of eight of the horse’s A/4* starts, including his only 4*-L completion. A clear round will very quickly put pressure on those directly above, should they want to maintain their top ten rank. 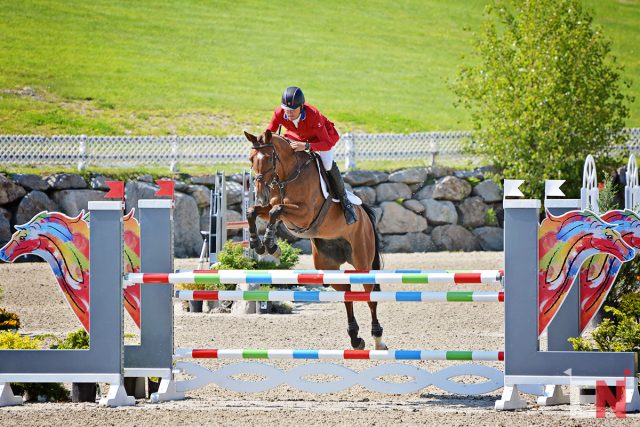 Boyd Martin will be well poised to move up on some of his other horses but On Cue is more apt to maintain her placing rather than move up. In seven A/4* rounds, this mare has had one rail at five of them, jumping clear only at her first start at the level back in 2018. In her only 4*-L completion, she incurred one rail at Bromont in 2019. On Cue is a good bet to match her current average and maintain a top ten placing. 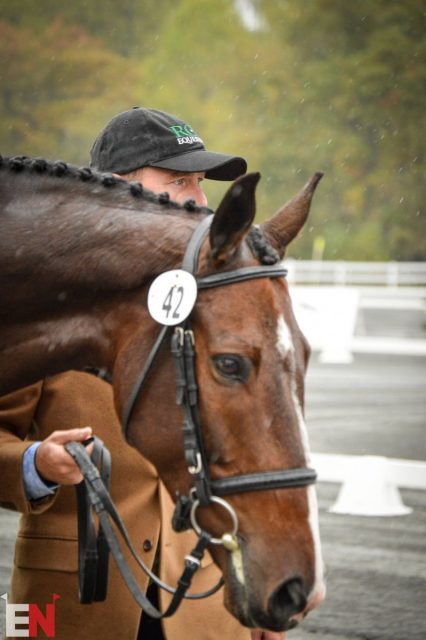 Will Faudree and Mama’s Magic Way. Photo by Abby Powell.

The young horse Mama’s Magic Way is green for the level but that didn’t seem to bother him yesterday as he cruised to the first clear round inside the time under Will Faudree. Although this horse has yet to see a stadium round as the final phase at the A/4* level, he’s jumped three of his four rounds clear. The only occasion on which he dropped rails was an unusual morning at Great Meadows, when the pair jumped around the stadium course in a blanket fog with surprisingly low visibility. 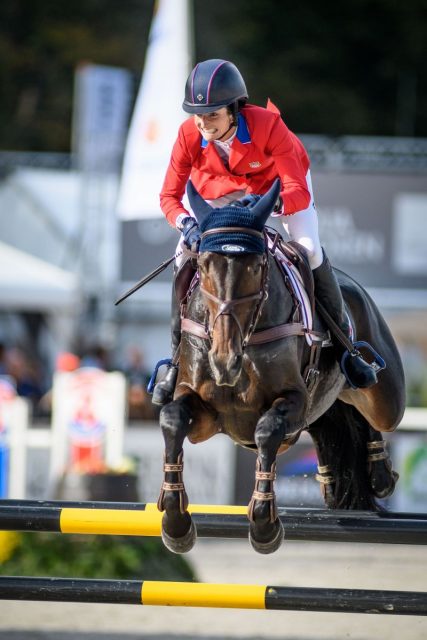 In her first year at the level in 2017, Stella Artois showed promise in the stadium phase but lacked consistency, with three rails at her first 4*-L completion and a clear round at her second. After Jennie Brannigan brought her back in 2019, the improvement in consistency was apparent; in six A/4* rounds she’s jumped clear in all but one, incurring only one rail total. That includes adding another two clear 4*-L rounds in 2019 at Rebecca and Boekelo, something that she should be able to replicate today. A clear round should move this pair up massively, putting them well in contention for a top five placing. 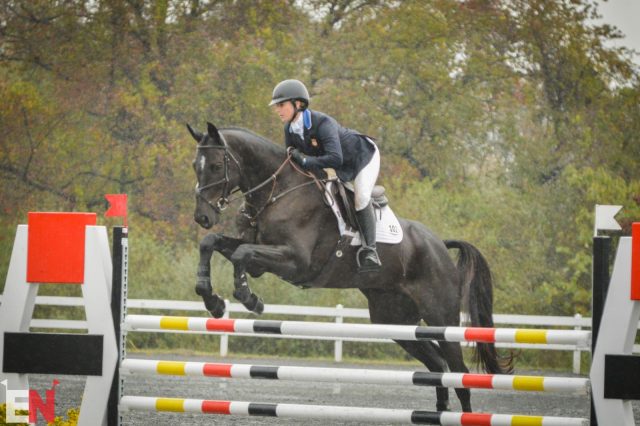 In their only start at the 4*-L level, Sydney Conley-Elliott climbed with QC Diamantaire up to the fourth place position last fall at Fair Hill 4*-L. They are in a position to do so again, but will need to make sure that this one-or-none horse is none today. In two runs when stadium was last, he jumped clear only once and his record is almost perfectly split between clean rounds and one-rail rounds with one two-rail round thrown in early in the horse’s career. A rail is more likely than not, but these two have pulled off the round they needed under pressure once, and could possibly do so again. 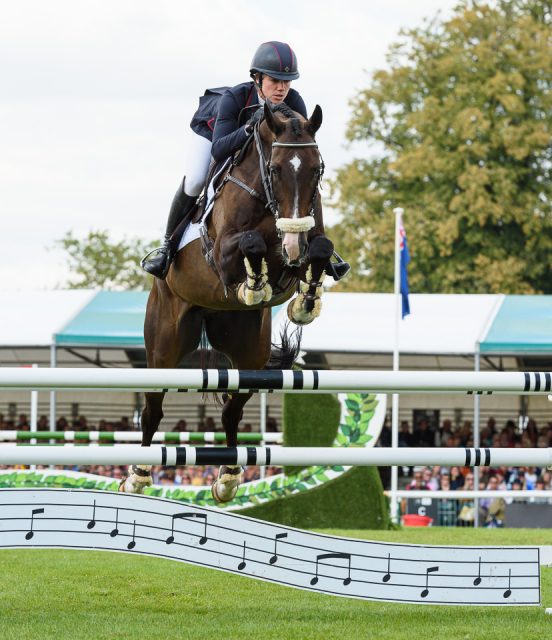 Ariel Grald has used 2020 to her horse’s best advantages, showing vast improvement in both the dressage and in the cross-country pace. Stadium has been a more secure strength for Leamore Master Plan, and these two could easily put in a clear round to put pressure on the later riders. In seven A/4* starts when stadium was the final phase, they’ve jumped clear in five of them, including both of their 4*-L completions in 2018. 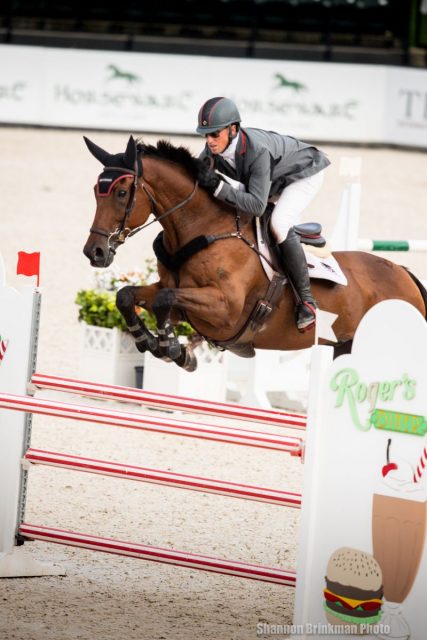 While primarily an eventer, Doug Payne does spend a considerable amount of time in the jumper ring as well which has paid off in spades with Vandiver. This horse’s record in this phase has transformed under Doug, jumping clear in 67.8% of their 28 completed rounds together. They’ve only once ever had more than one rail as a pair, back in 2017 at the Blenheim 4*-L. Out of five long format stadium rounds at the 4/5*-L, Vandiver has three clears and have also jumped clear in three of four A/4*-S when stadium is last. This pair will have no more than one rail today, and have a good shot at having a clear round; they’ll be in good position to capitalize on any mistakes from the riders placed above them. 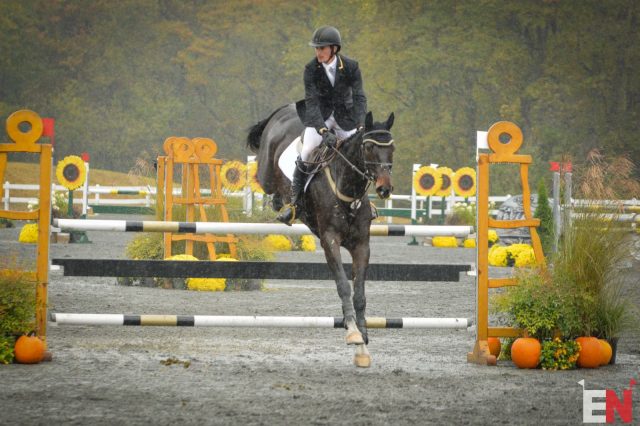 C’est La Vie 135 and Woods Baughman have performed above and beyond their experience all weekend and are in a strong position to maintain a top ten placing. Their stadium record at the level isn’t squeaky clean; in two A/4* starts in 2019 they accumulated a total of three rails while their two 2020 A/4* starts in 2020 were both clear. They clinched the Fair Hill 3*-L title on the back of a clear stadium round last fall and haven’t had a rail in six starts at various levels in 2020. This pair could certainly put in a clear round and end up as the highest placed 4*-L rookie here this weekend but even a single rail should keep them in the top ten. 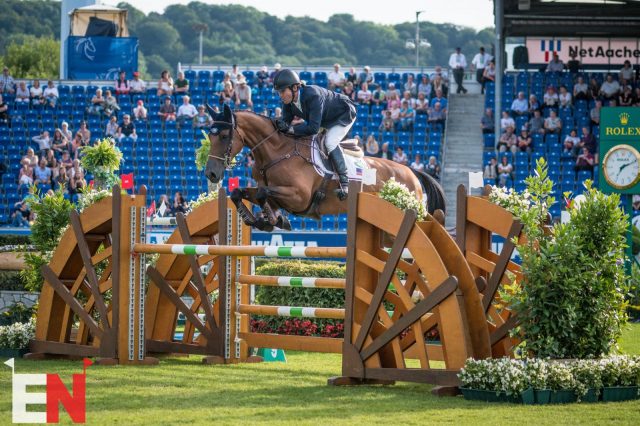 Phillip Dutton has one of the best stadium horses of his career in Z; he has only ever had three rails in his career out of twenty-five 4* rounds, including three clear 4*-L rounds. He’s also jumped clean in two of three 5* rounds, including a clear here at this venue during the World Equestrian Games in 2018. He’s also jumped clear in his last consecutive eight A/4* rounds, three of which were in 2020. While it’s not impossible for this horse to have a rail, it’s highly improbable. 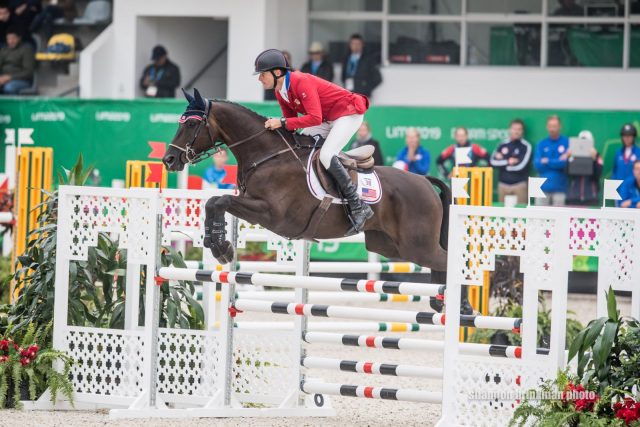 Boyd Martin‘s second horse in the top ten is the famous Tsetserleg, who also happens to be the horse with the most potential to put in a clear round for Boyd. This horse has not had more than one rail in his entire career at the A/4* level, including three clears in five rounds when cross-country is the final phase. Despite a notorious three rails at this venue in the 2018 WEG, Tsetserleg has also jumped clear here in the spring of 2019, as well as famously jumping clear to preserve his second place at the 5* in Kentucky last year. A clear will rocket him up to put pressure on those at the very top, but even a rail should keep them in the contest for a top five placing. 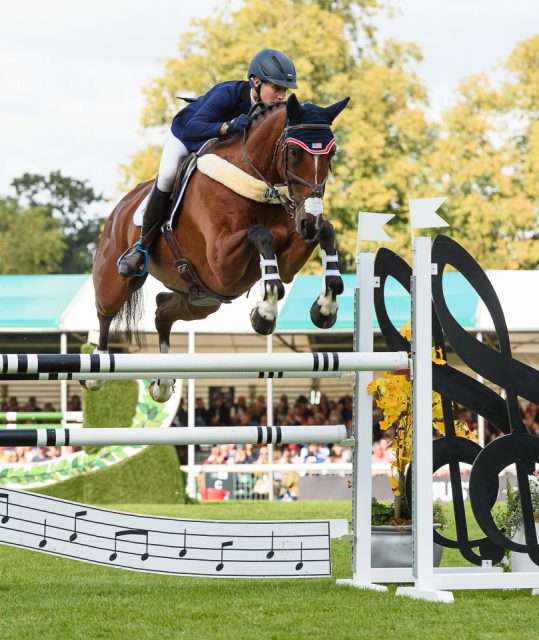 The hottest rider on the circuit this year is Liz Halliday-Sharp, who has won each of the three fall 4*-S on the East Coast, two of them with this horse Deniro Z. One thing that might surprise a lot of readers is that this pair has not yet jumped a clear round in the stadium when cross-country is before stadium; in five rounds under the phase order, they have twice had one rail, twice had two rails, and once had three. However, the pair has jumped four clear rounds out of four 2020 starts, so Liz Halliday-Sharp will be looking to translate that recent success to the long format this weekend.

Division Winner: I have to continue to call out Z as the biggest possibility of winning; his stadium record is considerably more solid on the final day than the two horses ahead of him. It will ultimately be a nail biter, where even the seconds matter; the top six are all separated by less than a rail.