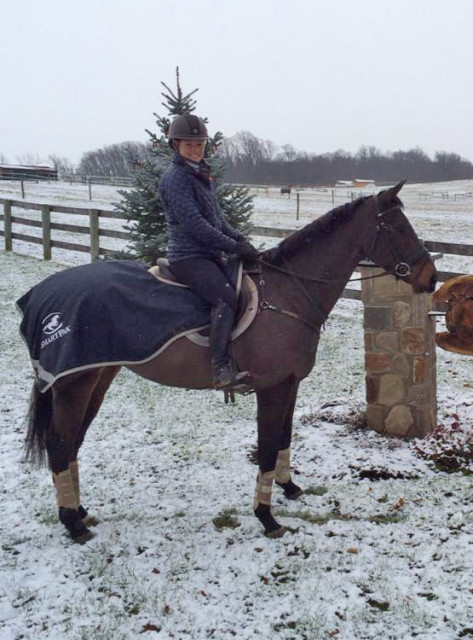 We’re excited to announce that Caitlin Silliman has purchased Vagabon de Champdoux, this year’s USEA Young Event Horse East Coast 5-Year-Old Champion, from Will Coleman and KBLB Event Horses LLC via a syndicate, she announced this afternoon on her Facebook page.

Vagabon de Champdoux, a 5-year-old off-track French Thoroughbred gelding by Secret Singer out of a Lute Antique mare, scored 81.5 to win the USEA’s YEH 5-Year-Old Championships at Fair Hill in October, giving him the top score among 5-year-olds in the country.

“I cannot wait to see what the future holds for our partnership and would like to thank everyone, including Will, his syndicate members who previously owned the horse, and those who made the purchase of this horse possible for me,” Caitlin said.

The top YEH score means “James” is eligible to receive $8,000 in his 7-year-old year thanks to the Holekamp/Turner Young Event Horse Lion d’Angers Prize and Grant to travel to France to compete in the two-star championships at Le Lion.

Will imported the horse earlier this year after Henri Prudent put him in touch with Geoffrey Debut in France. “I told him I wanted blood, and when he called me and told me he had something he thought I might want, I bought him straight away sight unseen,” Will said at the YEH Championships. “A good Thoroughbred is so hard to find.”

The horse turned out to be a bit too small for Will, and he said at the YEH Championships that his now wife Katie Coleman had been doing much of the flatwork on the horse because of that. 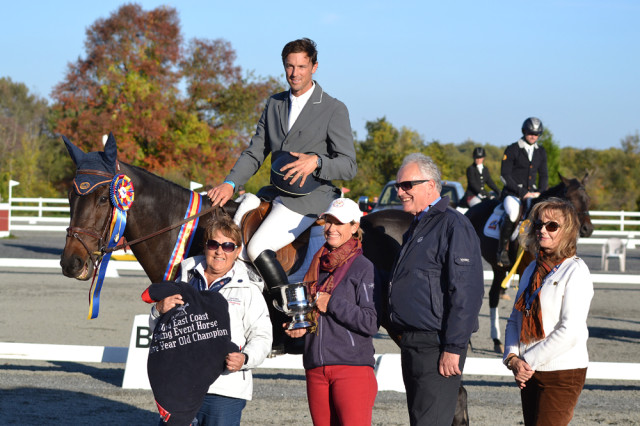 Will Coleman and Vagabon de Champdoux. Photo by Jenni Autry.

Caitlin is syndicating the horse, and her longtime supporter and Area II superstar volunteer Seema Sonnad, who has already bought into the syndicate, said she’s thrilled to be supporting Caitlin.

“I’m very excited about it because this is a horse that Caitlin really loves,” Seema said. “She fell in love the first time she sat on him. I also really love that he’s an off-track Thoroughbred, even though the track was in France!” We agree with Seema — that still counts!

Caitlin had an exciting end to her fall season with her four-star mare Catch A Star, finishing fifth in the big CIC3* class at Plantation Field International Horse Trials in September and going on to place fourth in the Dutta Corp Fair Hill International CCI3*, which she said she considers to be the biggest achievement of her career to date.

She said she’s excited to have such a nice youngster to bring through the levels and plans to take things slow next season as they get to know each other. “He’s only 5, and he ticks all the boxes — he’s all Thoroughbred, he moves, he jumps,” Caitlin said. “There’s no reason to rush him, but he should be able to do a one-star next year for sure.”

Caitlin said she has her eye on the new R. Bruce Duchossois Grant, which Phillip and Evie Dutton announced Saturday night at the USEA Convention awards banquet in Fort Worth, Texas. The grant, given in partnership with Phillip’s owner Caroline Moran, will award $25,000 to a CCI* or CCI2* horse with potential to represent Team USA on an international level.

“Our hope is to incentivize owners and riders to keep talented horses of this caliber here in the U.S. so they can one day go on to compete for our country,” Phillip said on his blog. “And if the winner of this grant ever does go on to accomplish that, we’ll award a bonus to acknowledge such an incredible achievement.”

We’re excited for Caitlin to have such a talented young horse and look forward to following along as their partnership progresses next year. If you’re interested in joining the Vagabon de Champdoux syndicate, email Caitlin at [email protected] or call her at 610-316-7318.