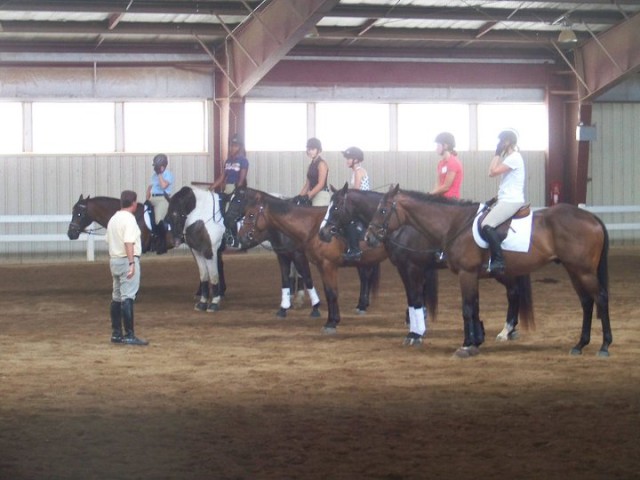 Well, color me joyful. I just signed up for summer camp.

Not just any camp: O’Connor event camp, my happy place in the world. After two years’ absence–one caused by both O’Connors spending the entire summer in England leading up to the 2012 Games, the next because Karen was still recovering from her very scary accident–it’s back. Even better, it’s moving to the Sandy River Equestrian Center in Axton, Virginia.

I will always love the Virginia Horse Center, where all previous camps I’ve attended have been held. Whenever we turn off I-81 and see House Mountain in the distance my daughter and I sigh. We’re home. But VHC is dusty and hot as heck in the summer, and though Axton, VA, is not likely to be any cooler it’s at least got tons of trees. And a swimming pool! And a cross country course I’ve never jumped before. I know the layout of Sandy River because I went to a clinic there last January, but the weather was lousy so we stayed in the indoor, grateful we had walls to block the Arctic wind. I saw the cross-country course in the distance. It looked amazing. Can’t wait.

I first went to camp in 2006. I loved it. First of all, I knew next to nothing about eventing, which hadn’t at all stopped me from doing it, and the week of good instruction completely flooded my brain, in a good way. I went from careening out of control over jumps–“When I tell you to slow down,” KOC bellowed on day one, “I at least want to see your shoulders move!” –to actually being able to balance my horse cross-country. I learned so much about how much I didn’t know. It was awesome.

Also, Karen O’Connor let me ride in her cross-country saddle. Because my own was part of my problem. And that was really cool.

Also, I loved camp and camping as a girl, and I still do. I was one of those kids who’d belly-flop into the lake every single morning before breakfast, who enthusiastically sang all the camp songs. I’ve never minded sweat, bugs, dirt. I like to play outside. A week with my horse? Fabulous! My horse thought so, too.

I couldn’t go to camp in 2007 due to my brother’s wedding, but I didn’t miss a year between 2008 and 2011. Eventually my daughter and her horse started coming, too. My daughter got a new horse in 2012 and has been mourning the fact that dear Mickey’s never gotten to go to camp. We’re fixing that.

Here’s the lineup of instructors: Karen O’Connor. David O’Connor (oh, yeah, I think I’ve heard of him). Cathy Wieschhoff, who’s a veteran camp instructor, and such a fabulous teacher that I’ve ridden with her as much as possible since 2006 and am paying her to teach my beloved pony clubbers in June. Clark Montgomery. You might have heard that he’s leading Badminton after dressage, but he also taught back in 2006 and I remember him for his patient expertise. Clark’s wife, Jess Montgomery, will teach stable management.

Let’s see. It’s May 9. Six weeks ’til camp begins. Better start the trot sets, and begin cleaning up my tack…