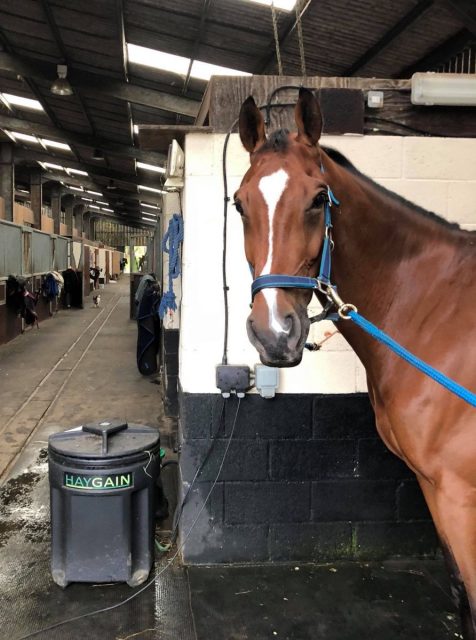 Three event riders in the top 10 of the USEA’s 2018 rankings consider Haygain steamed hay a stable staple, at home and on the road: #2-ranked Caroline Martin, #7-ranked Tamie Smith; and #10-ranked Liz Halliday-Sharp. Interestingly, none of them started using a Haygain steamer for its main benefit and the reason for which it was developed: protecting the equine respiratory system.

Caroline turned to steamed hay four years ago to treat an Advanced horse struggling with a heart condition attributed to a bacterial infection. For Liz, steamed hay was recommended by her vet to help prevent a recurrence of ulcers diagnosed in her five-star partner Deniro Z last fall. Tamie found it to help famously finicky eater and five-star competitor, Wembley, eat enough to maintain optimal weight.

Haygain’s bonus benefits are many, but steamed hay’s core purpose is the protection of the horse’s vulnerable respiratory tract. As conditions on the Equine Asthma Spectrum become better understood, more professionals are following Caroline, Liz and Tamie’s lead in making steamed hay a must in their programs.

The American Association of Equine Practitioners (AAEP) identifies respiratory function as the “main constraining factor to maximal work level in the fit, sound horse.” The new research from the Belgian equine sports medicine veterinarians is one of 15 studies to confirm steamed hay’s effectiveness in ridding hay of breathable particles. The study confirms the connection between fungi and IAD, the most common condition on the Equine Asthma Spectrum.

The study also cited Haygain steamed hay as critical to preventing IAD: horses fed steamed hay were 65% less likely to develop the condition than those fed dry hay. Led by Dr. Julie Dauvillier, the study is the first to connect fungi in the horse’s respiratory system with high incidence of IAD. Along with many inhalable irritants, fungi are present in even the best quality hay. High temperature hay steaming kills fungi, hence its effectiveness in preventing IAD.

“This paper highlights a major piece of the puzzle of equine airway diseases: the role of fungi,” explains Dr. Van Erck-Westergren, co-author of the study. “In human medicine, fungi are known to cause many respiratory inflammatory conditions such as allergies, infection, asthma, etc.

“In equine veterinary medicine, we can find publications that relate the role of fungi in pretty nasty, potentially life-threatening diseases such as fungal pneumonia or guttural pouch mycosis, but barely anything else. Our paper shows for the first time that ubiquitous molds, including fungi, cause chronic lower airway inflammation which is deleterious for the health and performance of our horses.”

The study also found that soaking hay, haylage and “dust free” hay did not reduce the risk of fungi-related IAD, while wood shavings were deemed the best option for stalls that require bedding.

“Fungal spores naturally contaminate hay and straw during harvest,” the study explains. “The degree of contamination and proliferation is directly related to harvesting practices, initial levels of soil contamination, as well as storage conditions.”

Of the 731 active performance horses in the study, 79% were found to have fungal elements in a cytological examination of tracheal wash fluid. Horses with fungi in their airways were twice as likely to develop IAD than those without it.

How do you know if your horse has IAD? It sometimes presents with an occasional cough and mild nasal discharge, but often lurks without symptoms. Unexplained decreases in performance are complaints that often lead to bronchoaveolar and trachea washes that reveal an IAD diagnosis. Unmanaged, this condition will progress and potentially mean these horses are more susceptible to debilitating extremes of the Equine Asthma Spectrum, including Recurrent Airway Obstruction, or heaves.

While the study answers questions about prevalence and dangers of fungi, it raises others that warrant further investigation, especially for active sport horses. “A link between fungal growth and an immunodepressive state could not be demonstrated in our study,” the authors noted. “However, it is likely that the immune system of some of the horses included in our study would have been challenged by intensive training, regular transport and competition.”

Finding fungi in so many horses’ respiratory tracts caused the authors to question the “use of corticosteroids as a unique treatment of airway inflammation” because they depress the immune system, which actually fights the fungal infection. They noted that anti-fungal treatment is included in prescriptions for human allergic diseases involving a fungal component, like severe acute respiratory syndrome.

“Environmental management is the only way to protect your horse against fungi,” explained Dr. Van Erck-Westergren in a follow-up interview. “Fungi are everywhere: in the straw, in the hay and in the stall and storage areas. Their aim is to proliferate.

“There is now overwhelming evidence for the effectiveness of Haygain steamed hay in reducing IAD and helping to improve respiratory health in horses,” she continued. Regular stall disinfection, dust-free shavings and a sealed flooring system that requires minimal bedding, like ComfortStall, were additional recommendations for keeping fungi at bay, preventing IAD and maintaining the overall respiratory health.