The splendid Gatcombe Park is situated in the Cotswolds in Gloucestershire, England and is not only the home of Her Royal Highness the Princess Royal but is also the setting for the annual Festival of British Eventing this year presented by the British Equestrian Trade Association (BETEA). Here is my blog of two days at Gatcombe and four circuits of the cross country course to capture video action from all four competitions across the weekend! 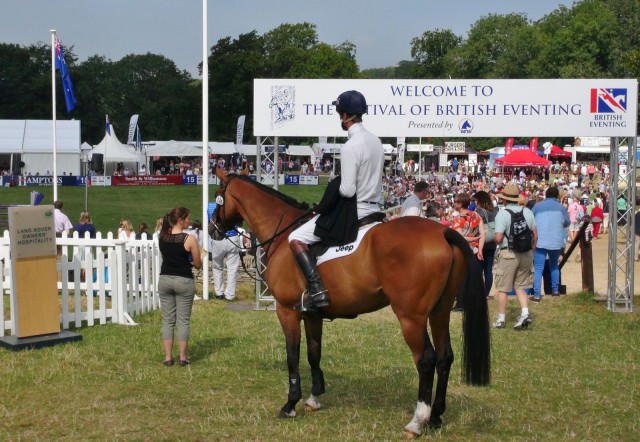 After Hartpury, Gatcombe is my closest major eventing venue. One of the things I love about Gatcombe is that, unlike Burghley, I know where the Advanced Land Rover car park is. So armed with this knowledge and media accreditation I set out on the morning of Saturday to video the Novice and Intermediate cross country courses and some Intermediate show jumping in the time prior to the Cross Country starting.

I couldn’t spend a lot of time with the show jumping but I was delighted that, having set up my camera at the edge of the Land Rover hospitality area, Bert Bolton and Purple Sands entered the arena to jump. I’ve said before how supportive Bert’s mum Fizz has been of the Harveywetdog project and it’s nice to repay people’s kindness with a quality video.

Having enjoyed Land Rover’s hospitality I set out for the start of the cross country course where Harry Dzenis and Cruise A Crosstown kicked things off. I quickly made my way around the Dodson & Horrell British Novice Championship Course. As you will see in the video the course was suitably challenging, a point brought home in harsh reality when Dunganstown Fleur and Sarah Holmes had a crashing fall in front of me at Fence 19 “The Dodson & Horrell Punt.”

The fall of horse and rider was bad enough but was made worse by the poor fence judge who having caught hold of Fleur (who as you will see from the video managed to get the red flag caught in her tail as she rolled over the fence) was then knocked over twice and was lucky not to be trampled on. As a foot note the fence was jumped again in the Corinthian Cup the next day but by then had acquired three roundels to emphasise the fence to the horses.

Saturday afternoon was spent making a second circuit of the Gatcombe Course in order to video theaction on the Smith and Williamson British Intermediate Championship cross country course. With a larger entry I was able to spend more time at each fence to capture the action.

The light was particularly good at the water jump later on in the afternoon and I was very pleased with the definition on my video of Cooley Lord Lux and Flora Harris at the water so once I’d completed all the videos on the Gatcombe playlist I used this piece of action as my Instagram trailer and a still as the thumbnail for the Intermediate video on You Tube.

For my part, having successfully completed two circuits of the hilly Gatcombe Park course, it was time for a final Cappuccino and then make my way home. As I’m now very disciplined about the order I video the courses in and with a relatively small number of entries in the Novice I was able to get that video edited and uploaded and out in time for Sunday morning.

Final thought on Saturday: Toward the end of the Novice I thought, I’ve got lots of video of Andrew Nicholson, I’ll just take a HD still of him jumping the last fence on MGH Grafton Street which I did. I used the picture of Andrew for my thumbnail. Little did I realise that approx 24 hours later this would be the fence where Andrew would have his career threatening fall with Cillnabradden Evo.

Sunday tends to be the main day at Gatcombe so it was up early, coffee at the Starbucks on the outskirts of Stonehouse and then through Stroud and into the Land Rover advanced parking to sign in at the media centre. A further cup of coffee and a bacon roll were taken at the Land Rover hospitality in the Park Bowl (look out for them at Burghley) and then it was off and around the course to capture the action in the new TopSpec Challenge for the Corinthian Cup.

I took my time around the course, but having completed and having got back to the main arena to find the Open Championship Show Jumping had finished early it was back to the Media Centre for a coffee and sandwich before heading back to the cross country start where Matthew Heath and The Lion were due to kick things off at 14:20.

The final phase is the cross country which is run in reverse order following the show jumping with the top placed combination going last. Having picked up my copy of the running order I noticed that there were quite a few withdrawals due to the ground being quite hard and although I can understand the decision to put your horse away for another day it is hard on the paying public (and me who has to get round the course in double quick time!).

It was quite an eventful afternoon — you’ll hear the announcement of Andrew Nicholson’s fall at the final fence, you’ll see Andrew Hoy fall from Rutherglen at the Skinny Brushes, and you’ll see some lovely smooth riding from New Zealander Jonelle Price and Australian Christopher Burton as they take on the water complex towards the end of their rounds which saw them take second and first respectively.

What you want see is Paulank Brockagh, having disposed of 2014 Badminton winner Sam Griffiths, charging for home past me off the course and running into a couple of spectators in doing so.

I  have provide a link to the Open video at the top of the blog. All the videos from my weekend at the Festival of British Eventing presented by The British Equestrian Trade Federation (BETA) are available on the Harveywetdog You Tube channel. Watch, like and share!