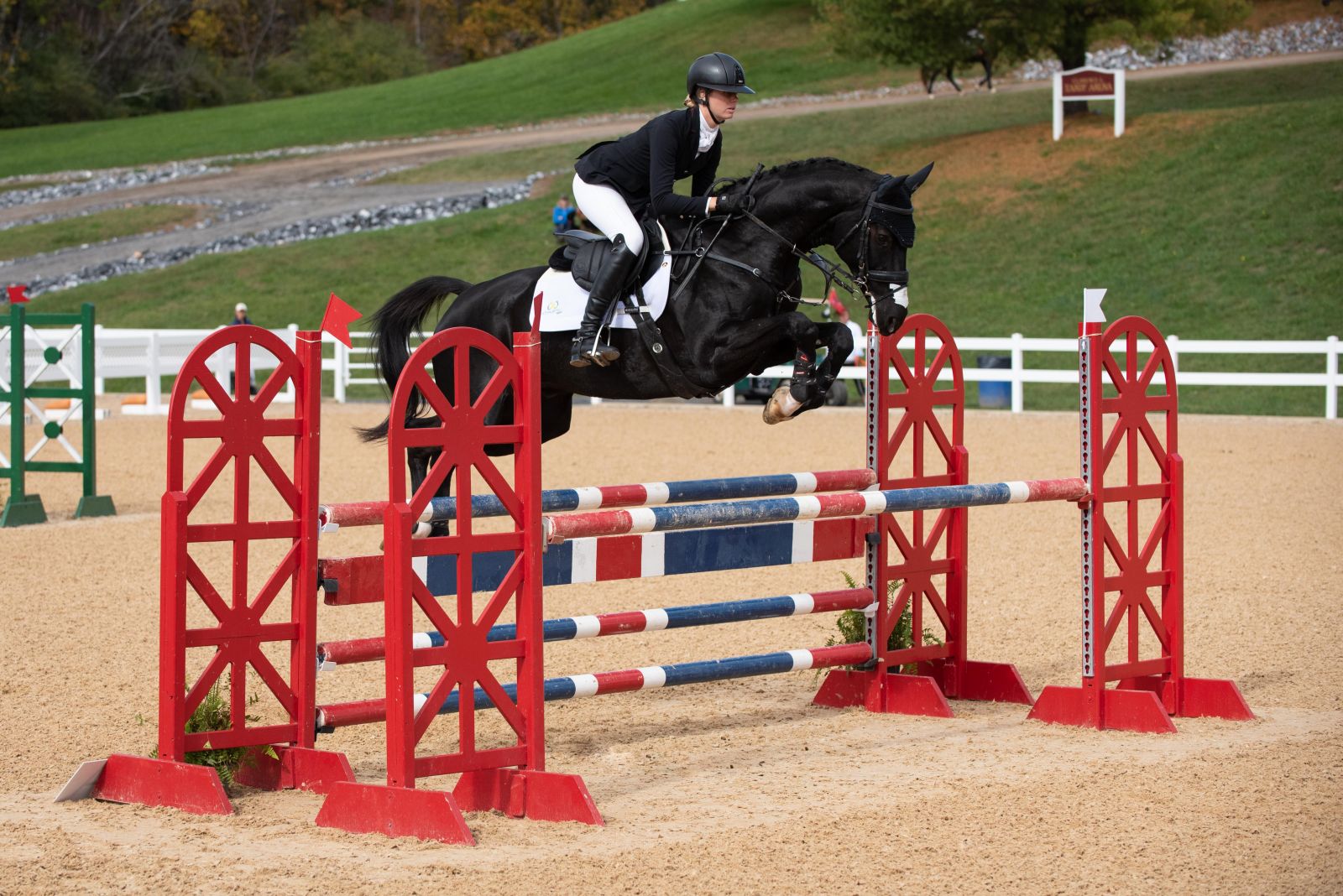 “I’m really proud of them. It’s not often we do show jumping last anymore with the new format,” Martin said. “They are six years old and they did a lot yesterday. For them to come out and jump phenomenal and have a lot of gas in the tank is extremely important to me. I think we did our homework and they felt fit and ready.” 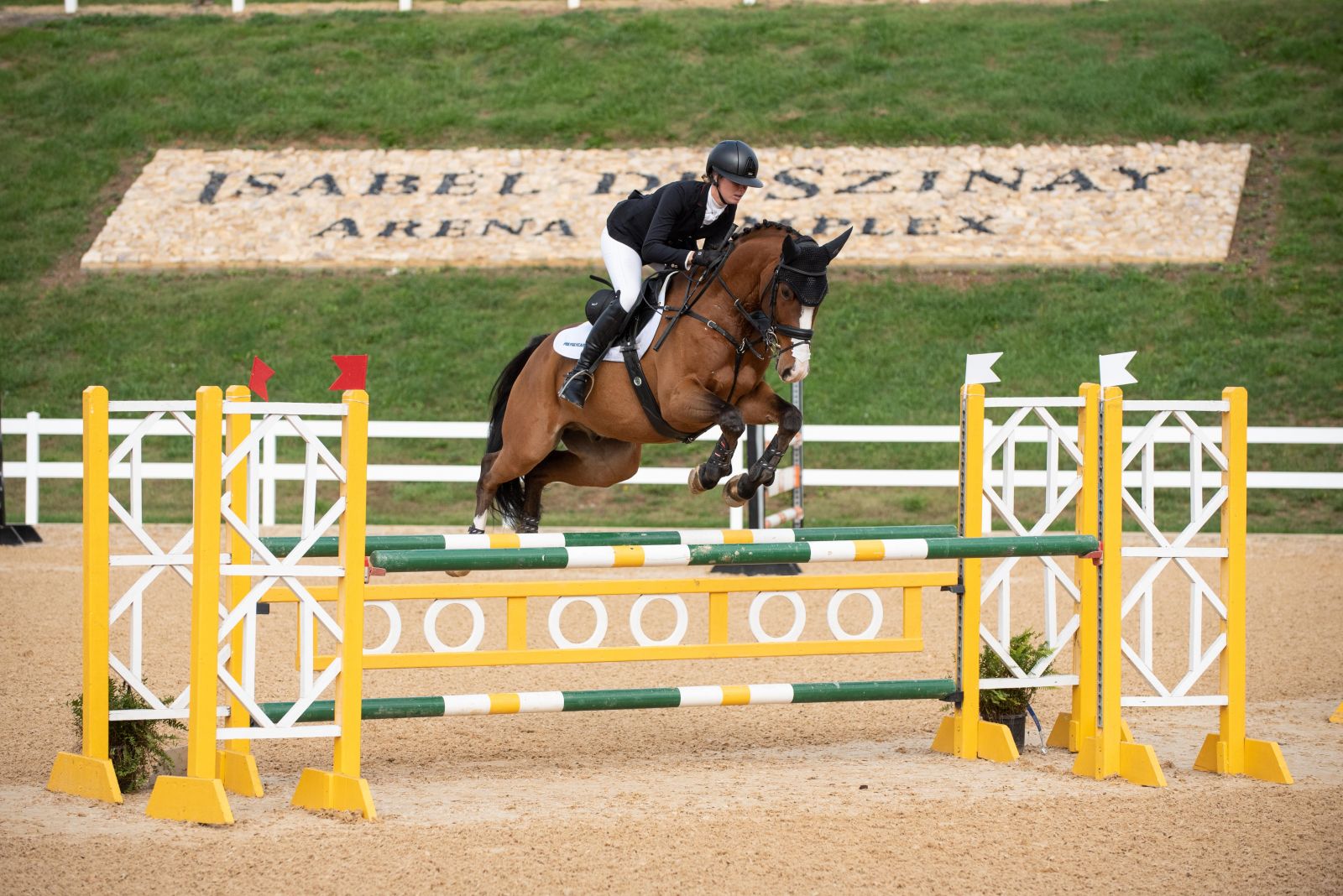 Caroline Martin and HSH Did It Anyway. Photo by Leslie Threlkeld.

“With each horse we have a plan. Last year my goal with Galwaybay Blake was to do as well as I could at the USEA Young Event Horse Championships, and he won that. This year my prep was to start thinking about getting him ready for Le Lion as a 7-year-old,” Martin explained. “Next year my goal is to get him as fit as possible and a bit more educated at the Intermediate level so we can fly over to Le Lion and be competitive.

“HSH Did It Anyway went from never eventing all the way to Preliminary level since the spring. I’m excited how easy it’s been to transfer him to the eventing world. Galwaybay Blake has fitness where Did It Anyway needs a little bit more. I don’t know if I’ll move him up to Intermediate or do another CCI2*-L so I can keep increasing the baseline of fitness. They are both super, proper horses and I think the world of them.”

While Martin has big plans for these promising young horses, they will get a well-deserved break first. “We’re going to take off their hind shoes and then chuck them out in the field for a month or two.” 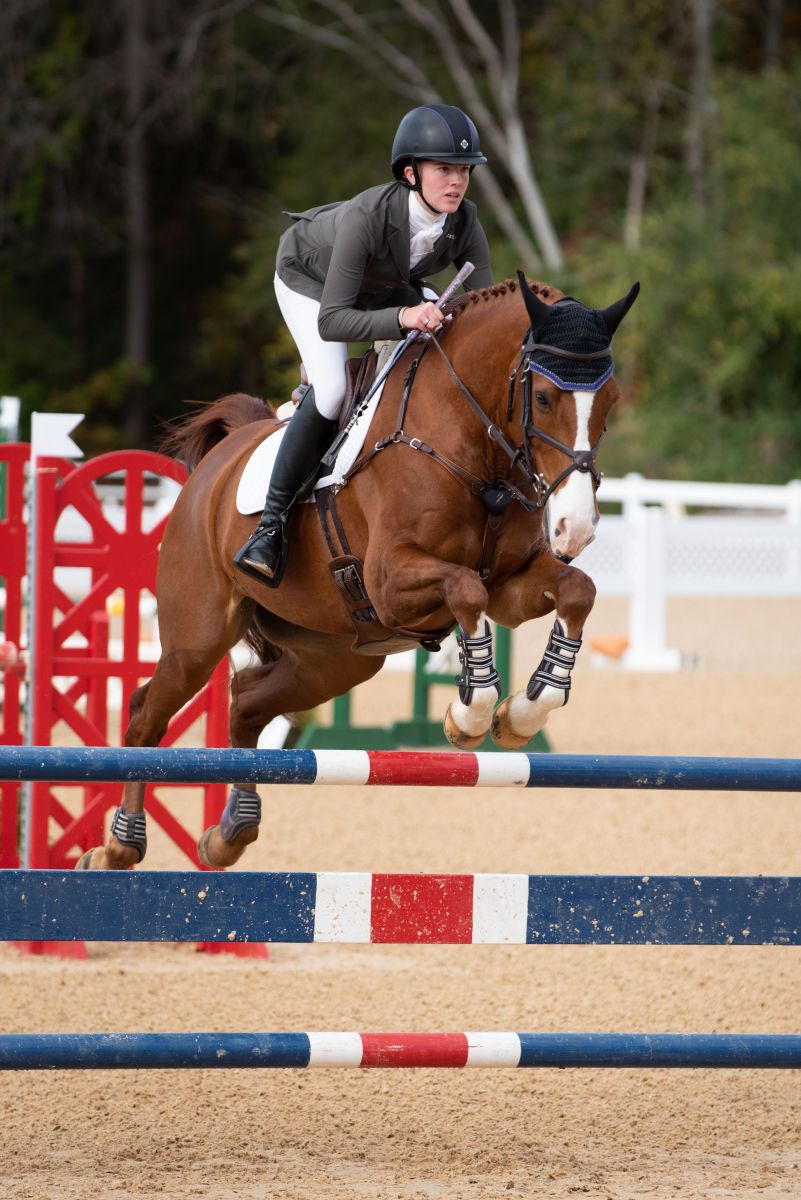 The top placed Jr/YR in the CCI2*-L and presented with the Harry T. Peters Trophy was Megan Loughnane and Flamenco Ping. They jumped a double-clear round to finish 12th overall in their first CCI2*-L competition.

“He’s a fun horse. He loves to jump. He was a little spooky on cross-country so we didn’t quite get the time but he was super brave,” Loughnane said. “He’s going to get a little break and hopefully move up to the three-star level next year.”

Loughnane is a student at University of Virginia and works hard to balance her school work with riding. “It’s a lot to get all my work done and ride but it’s worked out so far. I tried to make my schedule so I have time to ride every day and then go back and do homework,” she said.

Alexis Poe and Tell ‘M Nothin earned second highest placed Jr/YR in the CCI2*-L, finishing a fraction of a penalty point behind Loughnane in 13th place. 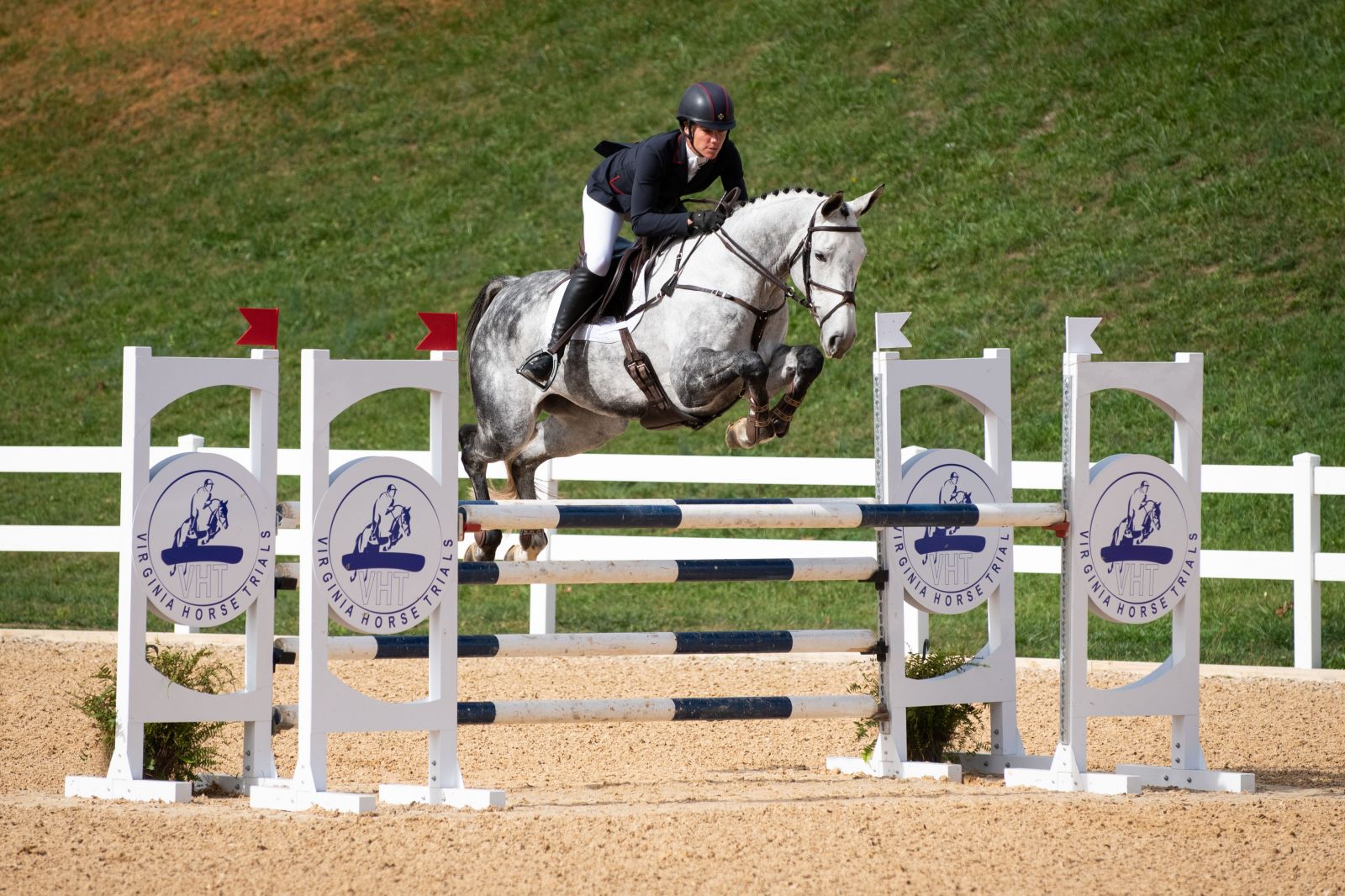 Ariel Grald entered the final phase of the CCI3*-L in first and second place. Two double-clear rounds secured her positions with Diara, who led from start to finish, and Isla de Coco, who moved up from equal third after dressage to finish second. Both mares owned by Annie Eldridge were competing in their first CCI3*-L.

“I’m really proud of them,” Grald said. “They’re really just stepping up to the plate for seven year olds. I’m really happy with where they’re at and they both put in three good phases.”

Both horses finished on their dressage scores of 26.4 and 27.9 in a competitive division. “It’s what I hoped for,” Grald said. “I have confidence in their flatwork and jumping and my fitness program, so I knew I had done all the prep and they were schooling really well. It was within their capabilities, but they both rose to the occasion.”

Ainslee Myers and Ballinglen Quality came out on top in the CCI1*-L. Posting one of only three faultless show jumping rounds in the class, they moved up from equal third after cross-country to win the pair’s first FEI event.

“I got him a year ago from Sharon White. He had done one Novice. I brought him home, jumped him around, and thought ‘I love this one,’” Myers said. “I did my first event with him in Aiken in February. He got third in his first Training and it’s only gone upwards from there.”

Scoring a 31.1 in dressage, the pair went double-clear on cross-country. Sunday’s show jumping shook up the standings, but Myers and her grey gelding ultimately finished on their dressage score. 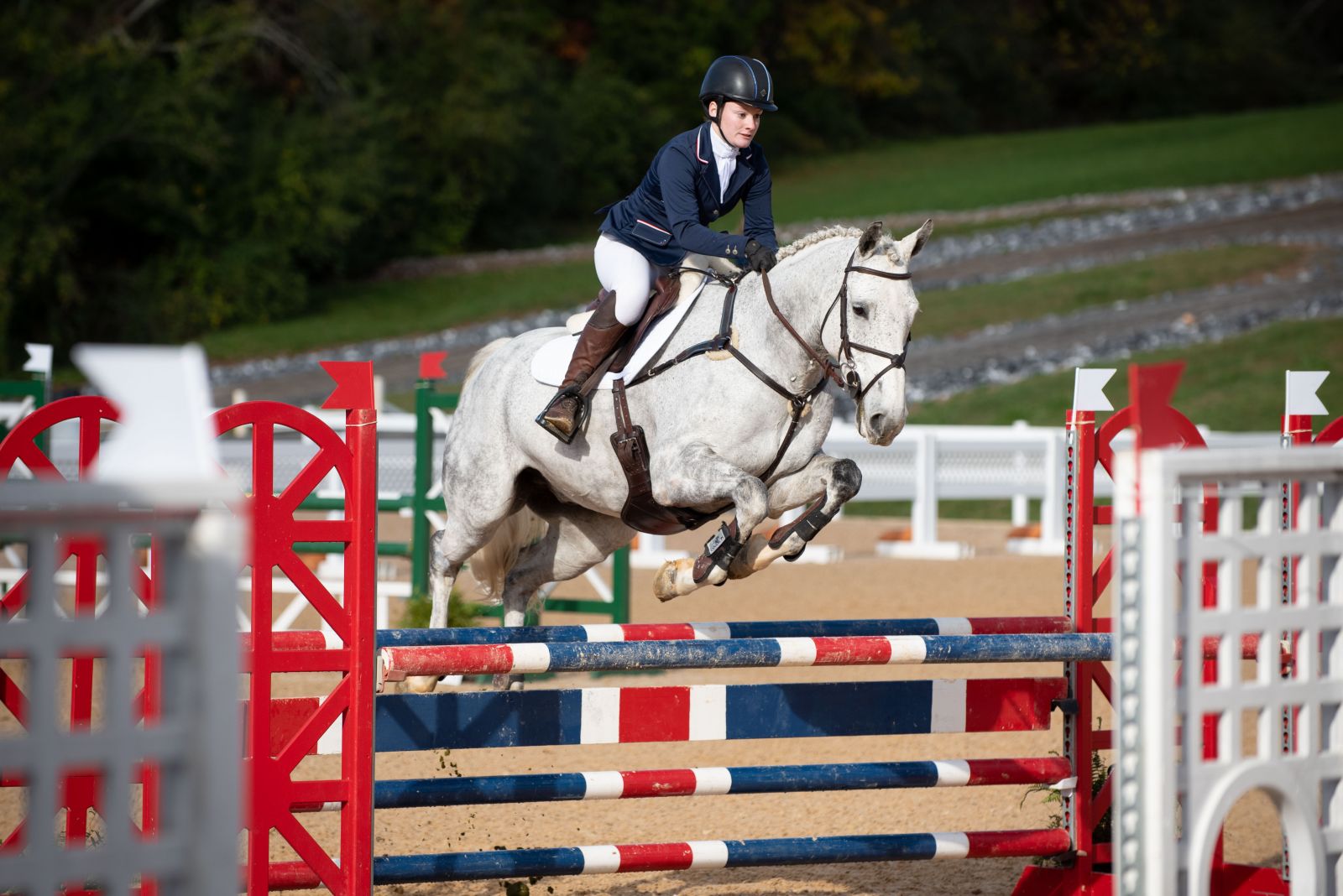 “He’s lovely on the flat. A lot of it is getting my balance with him. On cross-country he is so bold and does what I tell him to do. He’s always listening,” Myers said of the 9-year-old gelding — a favorite in the barn and lovingly known as Sweet Boy Echo. “He is the most perfect horse.”

In addition to the FEI divisions, VHT hosts Starter through Advanced/Intermediate levels and a variety of team competitions.

“We are proud and pleased to have the FEI and national divisions come together at VHT for a true celebration of the sport at all levels,” VHT Organizer Andy Bowles said. “It is unfortunate that VHT is losing the CCI3*-L in 2023 due to USEF feeling like it’s not required. We would be happy to continue running it. Thank you to all the competitors and their support teams for another great competition. We hope to see you again in May.”