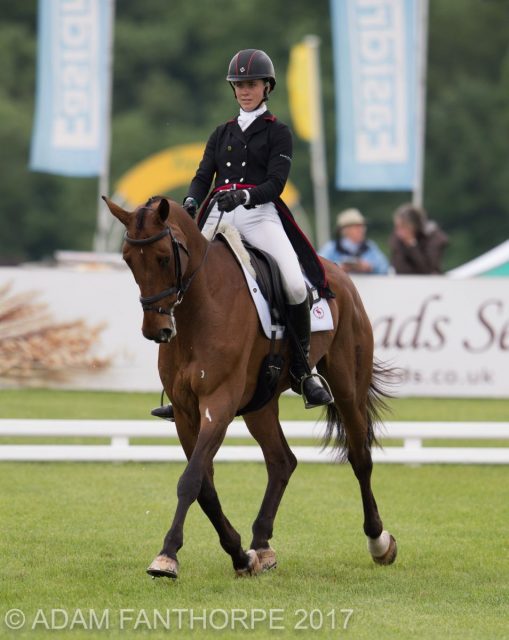 France leads the way in the Under 25 CCI3* at Equi-Trek Bramham International Horse Trials after the first day of dressage in West Yorkshire, England, with Thibault Fournier and Siniani de Lathus, an 11-year-old Sell Francais gelding by Volchebnik, in first place on 40.0.

Caroline Martin and Sherrie Martin’s The Apprentice, a 13-year-old Irish Sport Horse gelding (Casado X Funny Girl, by Fernblick), sit fifth on a score of 49.0, which she said left her a bit disappointed but also wisely pointed out that they didn’t come to Bramham to win the dressage.

“I went out and attacked the test at Houghton Hall, and he broke into the canter in the trot work. I was being tentative today about not letting him do that, but I didn’t go for it as much as I should have,” Caroline said. “He can tense his back a bit in the trot work, and I didn’t push for it and could have squeezed out more points. The canter was quite good, but we did miss one change.”

With heavy rain predicted for Saturday, Bramham is not going to be a dressage show, and pairs with strength in the cross country phase will undoubtedly rise up the leaderboard. The Apprentice, or “Dirk,” made the time for the first time at a CIC3* in his first start at the level with Caroline at Carolina International, which they won on their dressage score of 44.3. In three CIC3* runs together, Caroline and Dirk have added just 1.6 time penalties to their record.

“The course is even more beefed up this year, and it caused quite a bit of trouble last year. My plan is to go for it a best as I can, and I know (USEF Developing Coach Leslie Law) supports that,” Caroline said. “I wanted to come here and try to show everyone that this is a good horse. I am under 25 but I want to be considered for senior teams later.”

Caroline is spending a month competing in England on the Karen Stives Developing Tour, which seeks to give up-and-coming U.S. riders valuable experience at overseas competitions. She placed 17th in the Nations Cup at Houghton Hall CICO3* last month with Dirk with a clear round inside the time on cross country.

“The Karen Stives tour has honestly been life-changing for me. To be able to spend a month in England and be a part of a High Performance group has really changed my view on every aspect of my program. I try to be as competitive as I can in the States, but being here makes me want to be better in all three phases. It gives me that bit more of an edge and gets me out of my comfort zone.”

Caroline also has a second ride in the Under 25 CCI3* in Pebbly Maximus, a 14-year-old Irish Sport Horse gelding (Nazar X Kelshamore Lady) owned by Sherrie Martin. These two are coming off a strong performance at Houghton Hall, where they scored 43.1 in the dressage to smash their personal best and ultimately finish 15th in the  CICO3*. They are slated to go tomorrow at 5:04 p.m. local time/12:04 p.m. EST.

Looking to the other divisions at Bramham, Jesse Campbell and Cleveland, his own 10-year-old KWPN gelding (Watermill Swatch X Rielone, by Lennard), lead the CCI3* on 39.5, the only score in the 30s so far at the halfway point of the division. Paul Tapner and Prince Mayo, a 12-year-old Irish Sport Horse (Bonnie Prince X Crosshue Lass) owned by Fred and Penny Barker, lead the CIC3* on 42.1. Click here to view live scoring.

We have a second American competing at Bramham in Lauren Kieffer, who is riding D.A. Duras, a 9-year-old KWPN gelding (Numero Uno X Medoc, by Quattro) owned by Debbie Adams and Ms. Jacqueline Mars, in the CCI3*. They go tomorrow at Friday 9:08 a.m. local time/4:08 a.m. EST.

There is no live stream from Bramham for dressage, but BETV will live stream cross country on Saturday starting with the CCI3* at 9:30 a.m. local time/4:30 a.m. EST. Click here for the full event schedule.