It has been something of a whirlwind year for Ireland’s youngest team member Camilla Speirs. The 27-year-old wound down her season, which was highlighted by a top 10 placing at Badminton and a trip to the Rio Olympics, with a sixth place finish at the French four-star Pau over the weekend. This followed a double-placing at Ireland’s Kilmanahan Horse Trials in September, where she came first with Loughnavatta Cedar and second with Penny Swift in the CNC2*.

She kindly took the time to speak with EN about 2016 and her plans for the future.

‘An Olympics is the pinnacle of every athlete’s career’

Brazil was Camilla’s second call-up for her country as part of an Olympic team and she was traveling reserve, an experience that she enjoyed.

“It was a great experience to get the call-up; however it would have been even better to have been able to compete!” she tells EN matter-of-factly. “Jif (Portersize Just A Jiff) has been in great form all season and I think the technical cross country course would have really suited him, as he is small and athletic, and very good in this phase.”

“An Olympics is the pinnacle of every athlete’s career,” she says. “It’s extremely inspiring to be rubbing shoulders with the most successful athletes in the world! We had a great team in Rio [Ireland placed eighth] and team spirit was very high.” 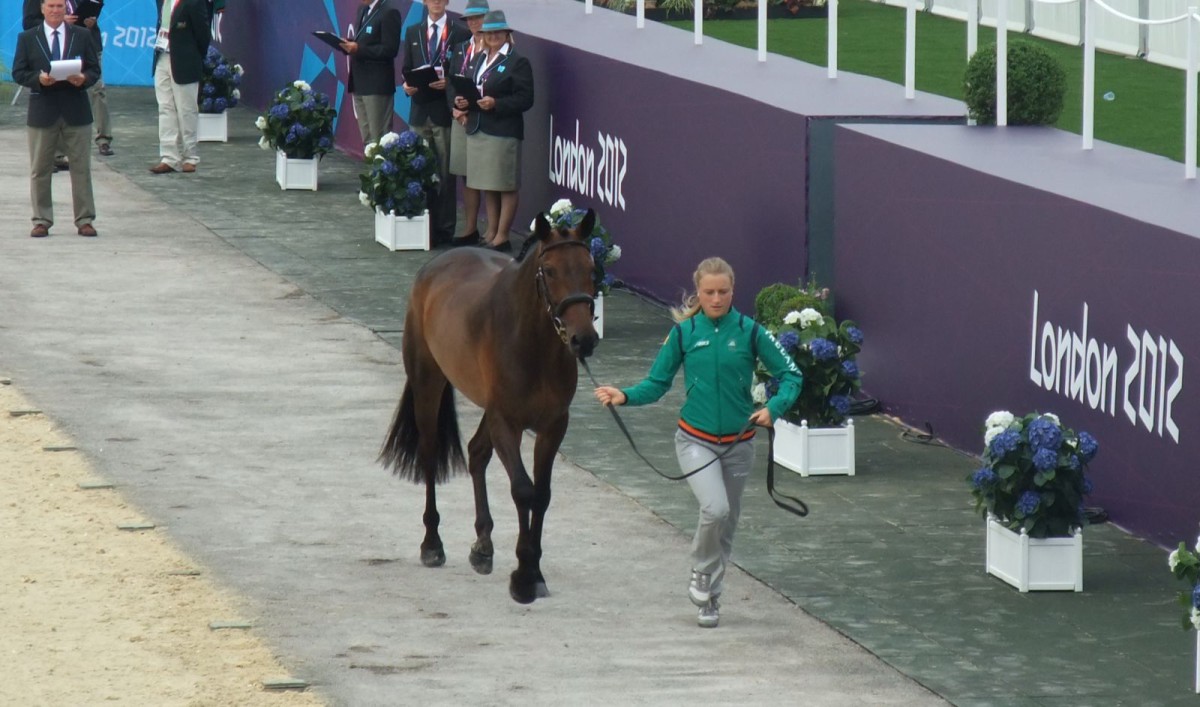 Camilla Speirs and Portersize Just a Jif were traveling reserves at Rio, having competed in 2012, pictured. Photo by Kathy Carter.

It would have meant the world to compete in Rio after the pair had a very unlucky fall in London at the 2012 Games, which saw them eliminated. It was of course an accolade to be selected as a reserve this year, but Jif is now 16.

However, one can never say never in terms of future Olympic selection — while the average age of Olympic event horses is around 12 years old, the great Lenamore was 19 when he competed in London 2012. And Jif keeps proving that age and height are no barrier to success, winning the Ballindenisk CNC2* and placing ninth at Badminton this year.

‘A horse of a lifetime’

Jif’s recent performance at Pau was tremendous, with the pair improving from 32nd after dressage to lie in 11th place following the cross-country. In the show jumping, they recorded one of just seven clear rounds to complete on 61.1.

“He’s certainly a very special little horse,” Camilla says. “We bought Jif as a four year old from show jumping producers Bourns Sports Horses, and I competed him in ponies, as he measured 148cm. As a five year old he measured out, so decided we would keep him to compete in Juniors. He kept progressing up the ranks and the sky is seemingly the limit for him! We have competed in seven European Championships, two World Equestrian games, and the 2012 Olympic Games. Jif really is a horse of a lifetime.”

Badminton was a real highlight for Camilla this year, and Ballindenisk International was also a special moment, not least because she also placed third in the CIC1* with the mare Lias Jewel.

“LEB Lias Jewel is a lovely six year old who came third in Ballindenisk in a very competitive field. It was a great result for this talented mare, and I’m delighted for the owners Jo and Neil Breheny, who bred her,” Camilla tells us. 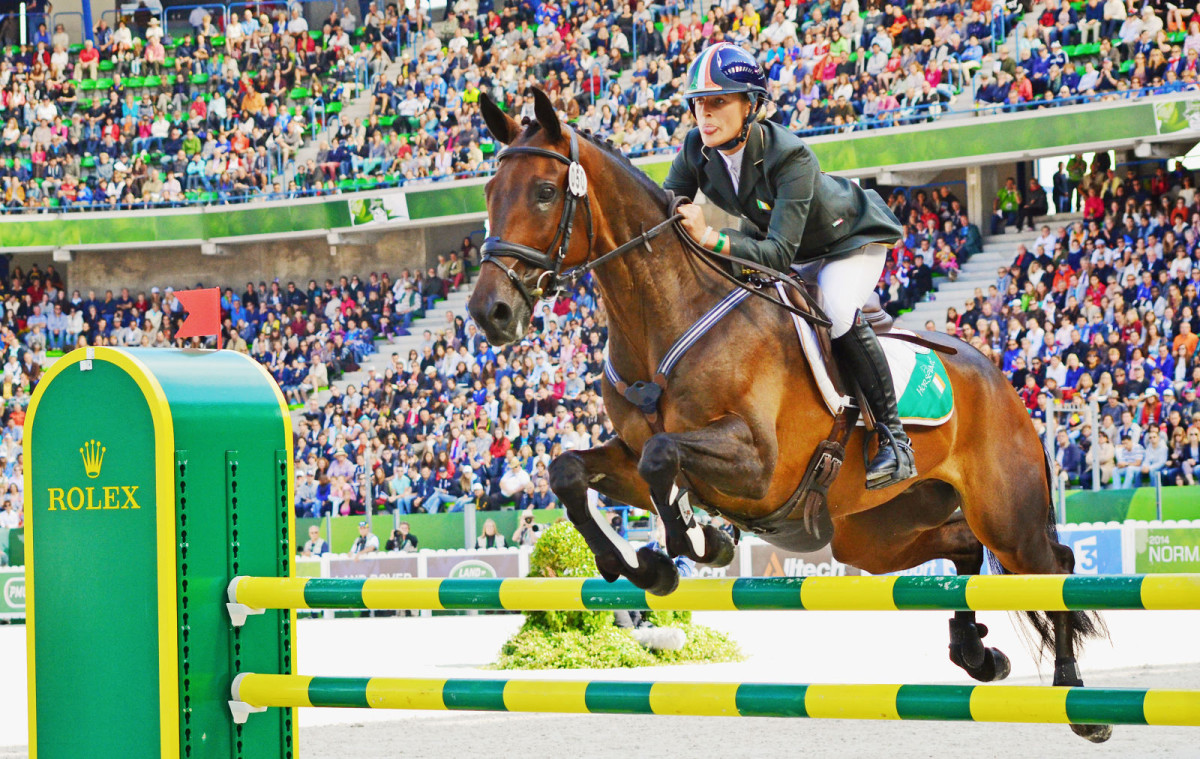 The popular rider has a string of horses to campaign next year, although the seven year old Loughnavatta Cedar, the promising young horse that won at Kilmanahan CNC2*, is soon off to pastures new.

“Loughnavatta Cedar has huge potential and a very exciting career ahead of him,” Camilla tells EN. “He has been selected to represent Ireland at the World Championships for Young Horses in Le Lion D’angers from 20th October, and then he is entered in the ‘Goresbridge Go for Gold’ elite sale of event horses in Barnadown on the 14th of November. He is owned and bred by Rory Costigan, and anyone looking for a true four star prospect would love this horse.”

Camilla’s reliable 13-year-old ride, Penny Swift, who placed second at Kilmanahan CNC2*, is also for sale. “She would be perfect for any young rider or amateur looking to get experience at two star level,” Camilla says.

Unsurprisingly given her young age of 27, Camilla’s parents Bridget and Nyall are vitally important to her career.

“They have been very supportive all the way through! My mum travels with me to all of the big events, and has helped build up our fantastic eventing establishment, which is home to the ‘BT’ prefixed event horses,” she says.

Camilla loves sourcing and producing young talented horses, and says it is a real passion.

“I have done it from a very young age. Buying a ‘made’ pony was never an option and certainly taught me how to ride,” she explains. “I’ve been lucky to work with some of the best trainers in the world and have built up the credentials to produce young horses to reach the top of the sport. Of course, selling them is also necessary to fund our business. Having a good eye for a horse is extremely important, so it’s nice to be able to work with really good horses every day. We are always looking for new owners to come on board!” 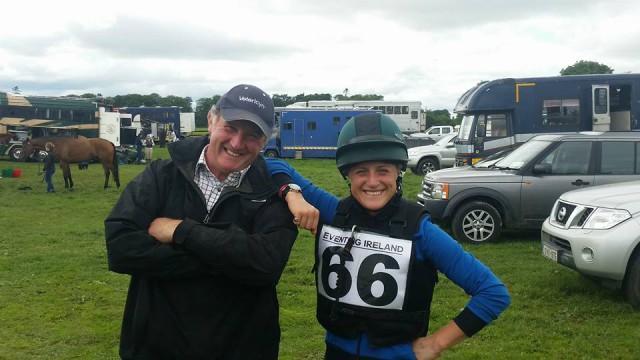 The eventer is keen to point out that the correct nutrition is vital to horses of all ages.

“We have roughly 14 horses to feed each day and not one single one is fed the same! I use Redmills Horse Feeds and thanks to the invaluable help from their experts, we come up with a tailored feeding programme so that each horse is getting exactly what they need. From the three year olds to the four star horses, it’s important that each horse is getting the right balance of feed,” she says. 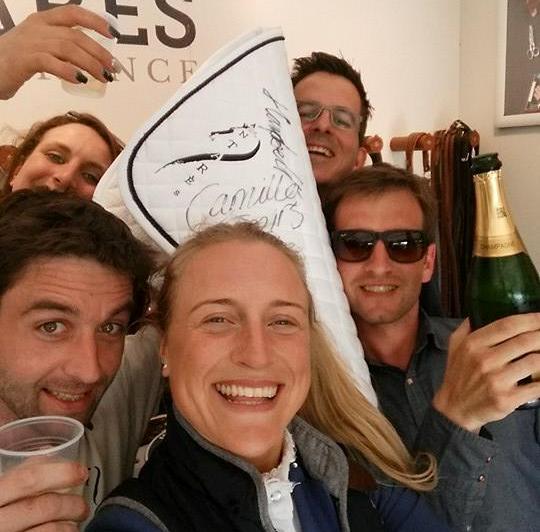 Camilla, who is sponsored by companies including Antarès Sellier, celebrates after her ninth placing at Badminton. Photo by Camilla Speirs.

To conclude, we asked Camilla what her ultimate riding goals are.

“To continue improving and striving to get the best out of all the horses I ride,” she tells us. “I think training like this gets results; training like a champion brings far better results than training to be a champion.”