This is a story about an unusual alignment of relationships within a Pennsylvania horse community and one particular retired racehorse who has flourished as a result of these connections. Perhaps this wasn’t the path that his breeder envisioned, but it is the beginning of his promising future. 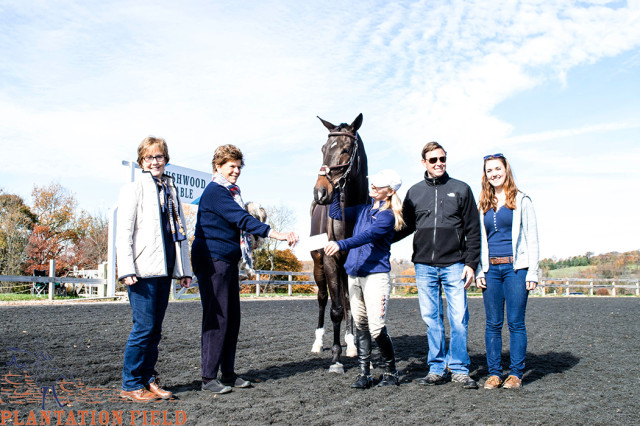 MK’s Concord Dawn, registered with the Jockey Club as Mason, was born in 2009 at Tim F. Ritchey Racing Stables. Tim, who previously evented at the top level of the sport in the 70s, is a five-time leading race trainer at Delaware Park. He and his wife Janet have a well-known training and bloodstock business, making headlines in 2005 for training  Belmont and Preakness winner Afleet Alex.

Janet shared a bit of history on Mason’s racing career: “Mason was bred to be a racehorse. His mother, whom we also bred, Della Street, had earned over $100,000 for us, and his daddy Smart Guy was bought by us for $10,000 as a yearling and went on to earn over $500,000, including the Pennsylvania Derby. Mason was always very friendly, good with other horses, easy to break and to train, so when he won his first race quite easily we really were not surprised.” 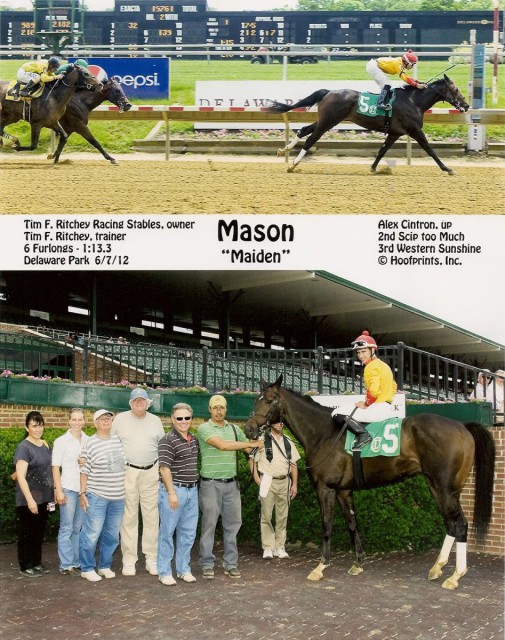 Mason in his racing career. Photo by Hoofprints Inc.

Janet went on to say that “what did surprise us was his subsequent racing career through 2012 and part of 2013, which can only be described as lackluster. He trained well but went through the motions in his races, but never returned tired. We decided he was not the racehorse we had hoped he would be, but he was handsome and his attitude pointed to being a useful show horse in the right hands and luckily that’s what he found. Although financially it’s not what we had planned, we couldn’t be happier to see our ‘Mason’ flourish.”

Two years ago one of Molly’s long time working students, Hannah Metz, was rising up through the levels of eventing at the age of 18. She and her horse Zhen were competing at the one-star level when Zhen was injured. Dr. Kathy Anderson, who was the primary veterinarian for MK Equestrian, was involved in the treatment of Zhen. She was also a vet for the Ritchey’s race stable and knew of Mason’s potential retirement from the track.

Since Tim had a background in eventing, he favored his horses being repurposed into quality eventing programs. Knowing that Molly’s young rider was in need of a potential project horse, Dr. Anderson made the initial introduction.

Dr. Anderson thought MK Equestrian could be the perfect retraining facility for Mason. Molly had previously re-trained many OTTBs in California and spent considerable time breaking and exercising race horses once she came east. Molly felt her time working with these young horses gave her a better understanding of how to bridge the gap from track to the cross country course. Having gained so much from the experience, she encouraged many students, including Hannah, to gallop race horses.

Break Away Farm, located near Molly’s facility in Kirkwood, Pennsylvania, was Molly’s starting point with race horse training on the East Coast and where many of her students have gained experience as well. Luck would have it that Mason was initially backed at Breakaway Farm by the owner and trainer Travis Kinnamon, who is also the brother of Molly’s husband, Bryce.

The Kinnamon brothers clearly gravitated towards horse women, as Travis is married to Wendy (Houghton) Kinnamon, whose family has a long history of training race horses for steeplechase and flat racing in the area. 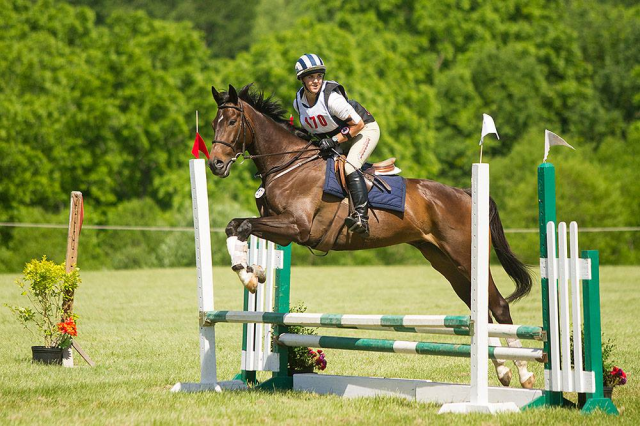 Hannah Metz did a wonderful job working with Mason during his first year off the track, introducing him to the sport of eventing at some starter trials while working and training with Molly. Ultimately, she made the decision to sell Mason, as she recognized his great talent and knew she didn’t have the resources to take him to the top of his potential.

The opportunity presented itself for Molly and Bryce to buy this rising star and to keep him within the program at MK Equestrian. Hannah was thrilled with this next step for her horse. Months later it became a clear choice to use this break from riding to pursue a degree in nursing.

The timing was perfect for Molly and Mason as Plantation Field Equestrian Events announced a $5,000 Thoroughbred Competition Series for the 2015 eventing season. Sponsored by Kathleen Crompton, more than 90 horses competed for this prize awarded to the owner of the Thoroughbred earning the most points during the season.

Points were accumulated in the recognized and starter horse trials in the Beginner Novice, Novice and Training divisions. In addition, this program also rewards the original breeder of the horse by awarding a $500 breeder incentive. For Molly, this has been an exciting addition to the program, as she’s been able to stay actively involved with the Ritcheys as Mason has progressed through the levels of eventing.

Mason began his 2015 eventing career with a win at Sporting Days Horse Trials and then several other top finishes before coming back from Aiken last winter. He finished second at his first recognized competition at Plantation in the Novice division and was awarded points for being the top OTTB for that division.

He continued to accumulate points by winning his Novice divisions in May and June before moving up to Training level over the summer and then eventually winning his Training level division at the October starter trials as well to win the $5,000 Thoroughbred Competition Series.

The continuation of the series has already been announced for the 2016 season, with hopes that this will encourage area equestrians to continue to seek partnerships with talented young Thoroughbreds. Denis and Kathleen are hopeful that the program will grow in popularity to the point that they can have entire divisions dedicated to off-the-track Thoroughbreds.

The Unionville community has long been a region dedicated to breeding, racing, fox hunting and producing top Thoroughbred sport horses for multiple disciplines. This new incentive will certainly help support that purpose within the eventing community, and Molly is honored to be the first recipient.

“Kathleen Crompton had a vision a year ago, and from her idea and generosity along with the help of Denis Glaccum and his generosity … The Thoroughbred Challenge at Plantation Field was developed,” Molly said.

“I am so honored and thankful to be riding MK’s Concord Dawn. He is all class, and this award means so much to myself, my husband and my team at MKE. There are so many great Thoroughbreds out there. I hope this program will encourage people to find these shining stars and develop them into their second careers. Thank you Tim and Janet Ritchey for helping source Mason into eventing as his second career.”