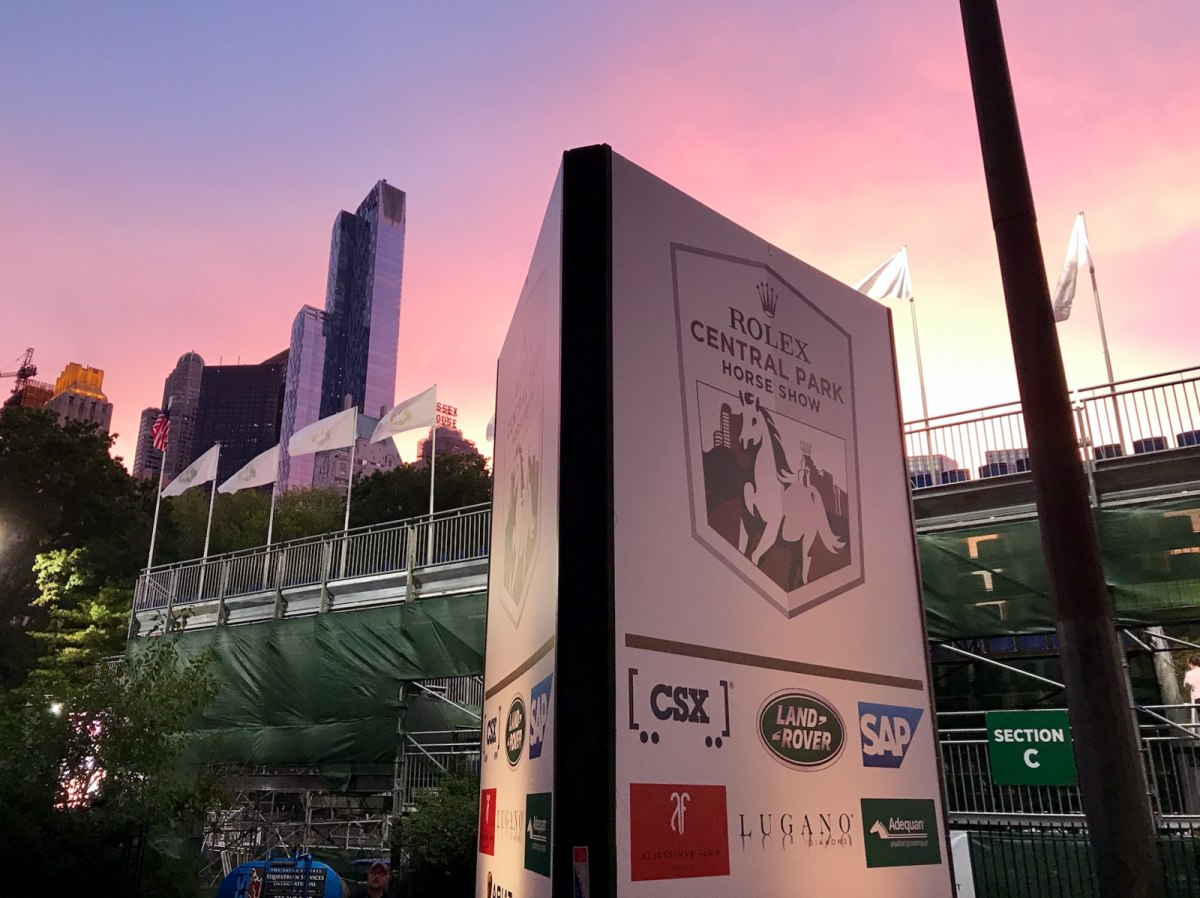 I’m a fan of three-day eventing and I live on Long Island, which is kind of like being a surfing fan who lives in the desert. When I heard that the Central Park Horse Show was suddenly substituting arena eventing for its originally scheduled Saturday night dressage class, I knew I wasn’t going to pass up the opportunity to see some marquee riders and a few of my favorite horses in the flesh, even though I had serious doubts about the format.

Also, to be fair, the bright-lights, big-city aura of the venue had limited appeal for me. I have lived and worked in New York, but I never loved being there, and one of the things I treasure about eventing is being out on a cross-country course, savoring the flavor of each site — the bright autumn colors of Fair Hill; the crickets chirping among the stone ruins at Plantation Field; the rolling hills of Millbrook; and the vast green meadows of the Kentucky Horse Park.

“This isn’t going to be real eventing,” I kept warning my husband, who spent his professional life handicapping and writing about Thoroughbred racing, but had never been to a horse show of any kind. He had also developed a serious aversion to sport coats since retiring last year, but I had read somewhere that the dress code would be smart-casual/cocktail attire, so he dutifully complied, and off we went.

As is usually the case in New York, getting there was much more than half the battle. I had tried to map out the location of the arena, Wollman Rink, with little success. There was nothing on the CPHS website, and an online diagram of the park showed the skating rink as vague light-green blob near the zoo, but a direct route did not reveal itself. “Oh, well,” I thought, “there will probably be signs.” There weren’t.

Too late—the next day, in fact—I finally saw the fine print at the bottom of the tickets we had printed out at home, saying that the best park entrance was Central Park South. We made the mistake of trying to come in via Fifth Avenue.

One of the odder characteristics of New York is that no one has ever been able to tell me where something is — in this case, not a crossing guard, not the guy in the falafel truck, not fellow pedestrians, and, incredibly, not the two young female cops buying water from the falafel guy.

“I’m really sorry,” said one of the officers, adding, “I think it’s over that way. Some people just went through the zoo.”

We wandered along the zoo’s nearly deserted walkways and past silent buildings, with night falling and my anxiety rising. It probably didn’t help that I had recently re-watched part of “Cat People.” Up ahead in the twilight, I saw a security guard starting to close the tall wrought-iron gates.

“Don’t worry, we’re not going to get locked in the zoo,” my husband joked.

I finally spotted a small sign for Wollman Rink, but the path led to an underpass, which was now almost completely dark. I peered into the tunnel and didn’t see anyone lurking, but we walked a little faster and I took my husband’s arm. 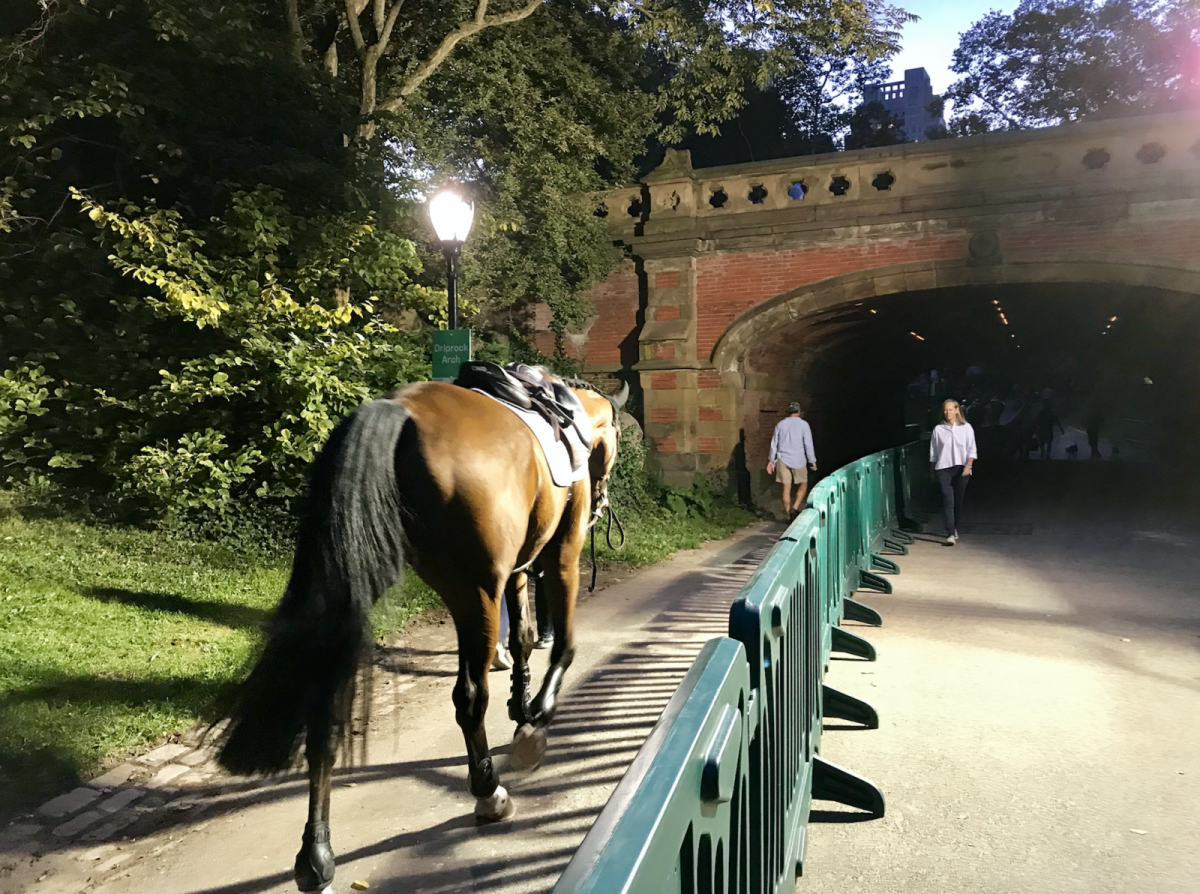 “I’m not going to be a Law and Order opening,” I said, as an incantation.

Eventually, the glow of lights and the sound of a band led us in the right direction. My adrenalin started pumping again as I glimpsed a corner of the ring and spotted the tall, lean figure of Boyd Martin striding around the arena with his purposeful but slightly gimpy gait. The other riders were also out briskly walking the course, and I blurted, “There’s Jennie Brannigan! That’s William Fox-Pitt!”

Our reserved seats were in the fourth row, right on top of the action, which was great except for not having a clear view of the back corner of the ring, where a mysterious bank jump made me think that the first couple of competitors had made some kind of scary mistake. That jump bothered me all night, especially when Lisa Marie Fergusson’s magnificent Honor Me, a 17.1-hand chestnut who is amazingly quick and agile, apparently tried to clear it all at once.

The small ring lent a slot-car-track quality to the arena, and I couldn’t help wincing when horses twisted in midair over a jump to make a sharp turn. Winning East Village team member Dom Schramm later said that he had mentally apologized to his horse — “Sorry, mate, I wouldn’t normally ride you like this” — and while he may have been joking, his words echoed what I had felt. The announcers kept urging the riders to step on the gas and were trying to whip up the crowd to cheer, but there were also plenty of gasps when a hoof would meet an immovable wooden obstacle with a loud “clonk.” 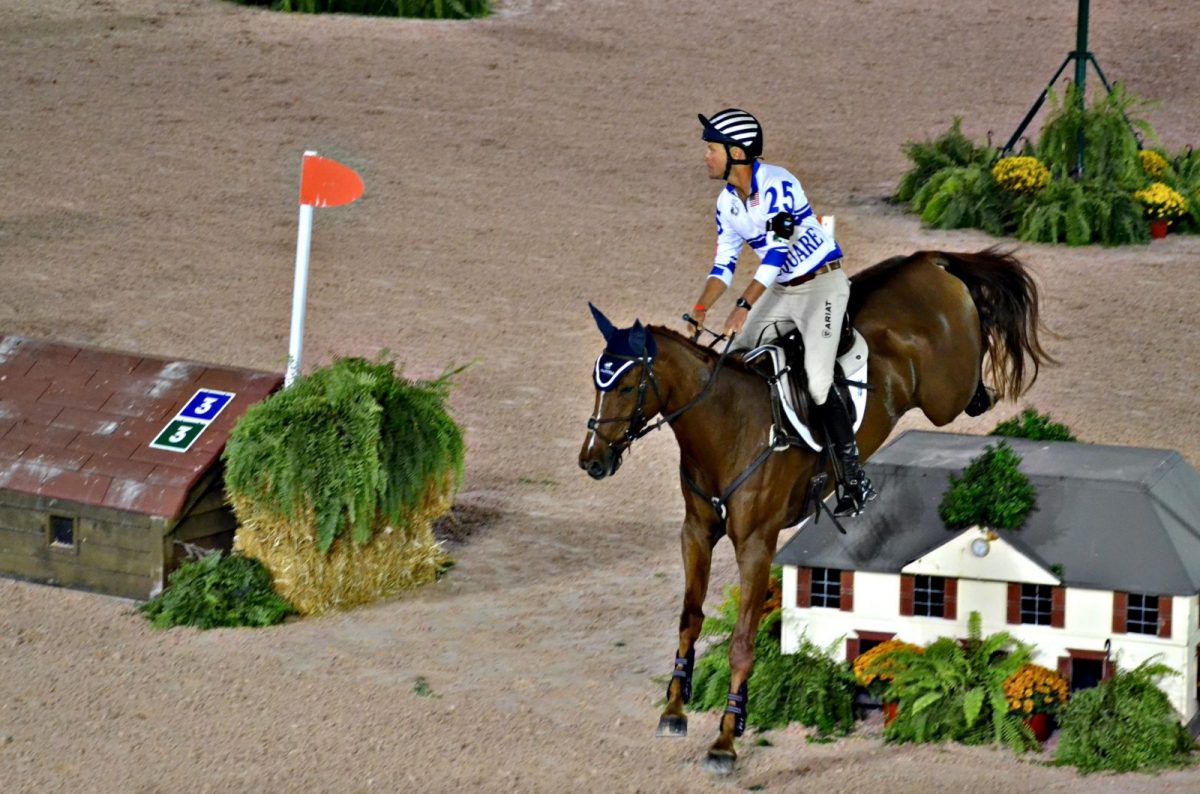 So, as a spectator, how would I rate the entire experience?

The amenities were a little disappointing, given the supposed glitziness of the Big Apple, and our smart-casual attire, which might have been appropriate in the VIP section, was the exception in a largely jeans-and-T-shirt crowd. The concession-stand service was slow, and my slightly sour-tasting turkey-and-cheddar panini definitely fell into the category of “For Fuel Purposes Only.” I had hoped there might be some cool horsey merchandise, but the small vendor area offered nothing but a thinned-out selection of apparel. At least there were real bathrooms with running water — a horse-show rarity.

For me, the single best thing was getting to enjoy the athleticism and heart of a horse like Cambalda, who, at age 15, was “turning and burning” with the best of them less than a week after finishing second in the CIC three-star at Plantation Field. I also gained a new appreciation for riders whom I had only seen previously on live streams, or from a distance at bigger events.

On the whole, though, the Arena Eventing Relay had the artificial taste of a gimmick or an exhibition, and I would be surprised if it satisfied most existing eventing fans or made any new ones. To steal a phrase from the author David Foster Wallace — no relation — I think it was a supposedly fun thing I’ll never do again.

Robin Foster is an editor and writer and has worked for The Thoroughbred Record, The Racing Times, and Daily Racing Form. She is an avid supporter of greyhound adoption and off-track Thoroughbreds.