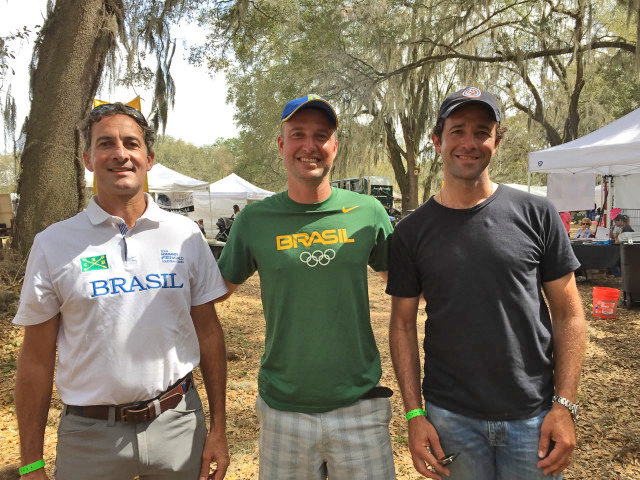 Don’t be alarmed if you’re at Red Hills Horse Trials this weekend, or in the general Ocala area during these next few weeks and see three rather handsome men in breeches wandering around together, but do be prepared to fall a tiny bit in love. Chances are you’ve bumped into Marcelo Tosi, Marcio Calvalho Jorge and Henrique Pinheiro, who are spending a month here in the USA while their horses complete quarantine requirements before heading to England to train with Mark Todd in preparation for the Olympics later this summer.

After spending seven days in Miami, Marcio’s three horses and one each for Marcelo and Enrique are now spending a month based at Liz Halliday-Sharp’s Horsepower Equestrian in Ocala. They each have a horse in the CIC2* here at Red Hills. After dressage under they occupied 5th (Marcelo Toss and Briefing DB Z) , 9th (Marcio Calvalho Jorge and Lissy Mac Wayer) and 24th (Henrique Pinheiro and Land Quenotte do Feroleto) places in a large division. In the cross country phase Marcio and Marcelo jumped clear with time, but Henrique was not so lucky and suffered a dunking when Land Quenotte do Feroleto crumpled on landing into the first water at Fence 8.

All three riders have previously spent considerable amounts of time in the UK training and competing before, anything from two to 10 years, but it’s the first competition in the USA for all of them, and they all have high praise for Ocala in general and Red Hills in particular. “It’s amazing. There are so many horses, a lot of horse farms, it’s an amazing place,” Marcio said. “The ground is very good for horses. It’s naturally sandy; the oaks are very beautiful.” 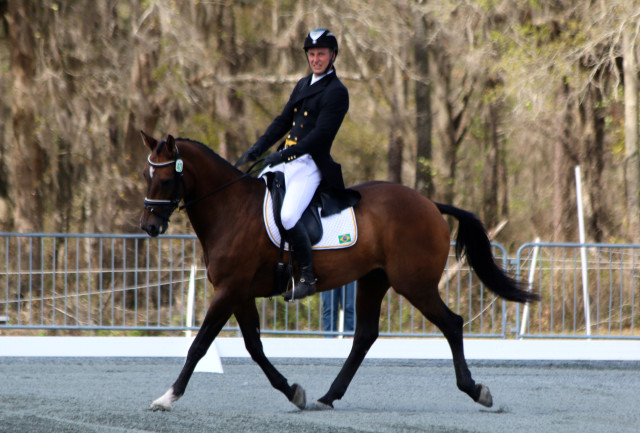 Marcio is riding his Pan American Games mare here, Lissy Mac Wayer, who he competed at three-star level in England at Chatsworth and Bramham, and at two or three three-stars in Brazil. “She can be a little bit difficult because she’s hot, she wants to go in the cross country, but I think this is good. For dressage she is a little bit hot but if you work well she can relax; she doesn’t like noise. In the dressage here she was relaxed.” Indeed, they turned in a lovely test, but for one rider error at the end when Marcio momentarily forgot the medium canter at the end of the test.

Marico shared that Mark Todd had advised him to not work Lissy on the flat the morning of his test as is his habit, but instead to take her for a hack and a quiet gallop in the cross country warm-up area, and this statregy seemed to work well.

The Brazilians are in almost constant contact with Mark while they’re here, and even when they were back at home last year in Brazil, Mark made the trip five times to train them there. To Henrique, that’s the real advantage to being in England as opposed to staying at home — having daily access to their coach, as well as the competition and the footing. 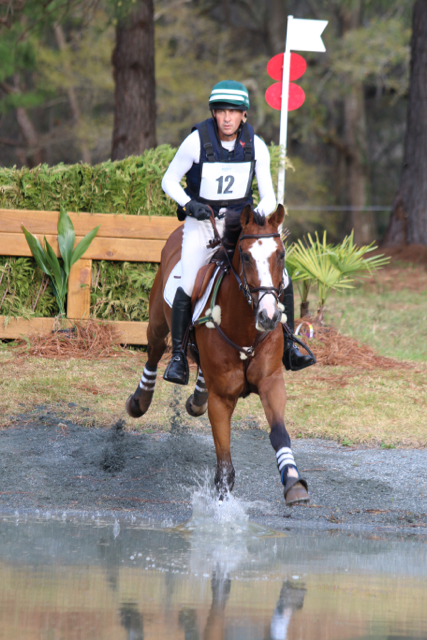 Leaving horses behind to concentrate on just one, both Marcelo and Henrique acknowledge it’s tough to stay sharp. “I think it’s quite hard for us to have just one horse to compete for five, six months. I think we lose a bit of condition. You go for something better and you lose something, but we’ll try to ride some horses in England, or do some fitness work, and we’ll have to try and compensate,” and they’re all making other sacrifices to try and make the team too.

Marcelo returned home to Brazil after 10 years abroad in Europe and England, only to now be returning to train with Mark in the hopes of a spot on the team for Rio. Henrique is leaving horses behind in Brazil to make the journey back to England with his one mare, Land Quenotte Do Feroleto, and if he doesn’t make it he says he’ll consider staying in England for Burghley or some other competitions, but otherwise he’ll be heading back home again. The horses have to complete the seven days strict quarantine (in Miami) and then 25 days in the U.S., “so we’re using the nice weather here, the nice competitions to improve the horses and train as well.” 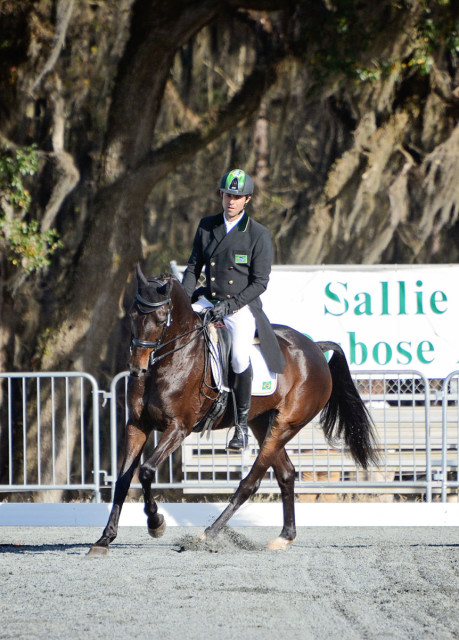 They’ve got to be feeling pretty clever as competitions in England are currently being abandoned due to severe rainfall, and it’s cold and gloomy at this time of year. Not much incentive to get family to visit, which is hardly lost on Marcio who’s left a wife and two children behind in Brazil. “My two girls and my wife, maybe they can come, it’s very hard, I miss them.”

What’s obvious though, when you see them, is their team rapport and camaraderie, and hopefully this will see them through the rest of the infamously wet spring season in England, and fingers crossed all the way to Rio. “We have known each other and been friends for a long time, we’ve ridden together since we were kids. We are close, and it’s good because we can be there for one another and know when to tease each other if the pressure is on, or know when to back away if one is grumpy, it’s good we are here for each other.”

As much as they say they appreciate the friendliness and welcome they’ve been given in the USA and love eventing here, we’re just as happy to have them and would love to see them return. Many thanks to Marcelo, Marcio and Henrique for stopping to chat, and wishing them the very best of luck for the rest of the year! Go Brazilian Eventing!