Chelan Kozak is an Canadian CCI4* rider who has represented Canada at the Olympic Games and World Equestrian Games. She recently taught a clinic in Smithers, British Columbia, where the participants got creative to build a makeshift cross-country course. Many thanks to Chelan for writing! 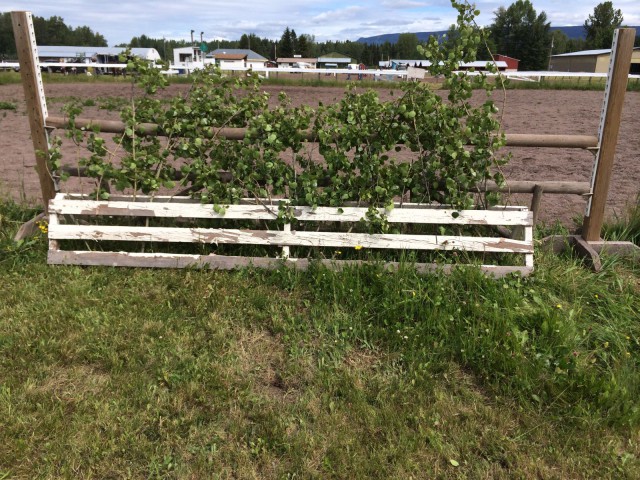 Getting creative! Photo by Chelan Kozak.

I live in Vancouver, British Columbia, where our province has a habit of producing CCI4* riders on a consistent basis — recently, Steph-Rhodes Bosch, Hawley Bennett and Rebecca Howard, to name a few. Most riders from BC leave to go east or to California, where there is more of an abundance of riders and horses and competitions and owners.

I still live here in BC, thousands of miles away from the heart of the sport in the U.S. Like most riders, part of my income is teaching clinics. Recently, I flew to Smithers, BC, which is 500 miles north of Vancouver, a logging and mining town of about 5,000 residents. I originally met the clinic organizer, Jane Lloyd Smith, when she came to the barn where I run my business to train with a local dressage coach there last summer.

Seventeen riders came to the first jumping clinic that they had held in the area in several years. It was hosted at the local fairgrounds — a great facility with several arenas for many disciplines. As a side bar, I was pleasantly surprised at the high number of riders wearing helmets during the western show in the adjacent ring on Saturday. #mindyourmelon

I’m sure those riders loping around on their Quarter Horses were wondering what was possessing that crazy lady in the pink hoodie to jump up and down shouting, “I can’t hear you counting!” to the riders jumping down the lines. Rider (in a stage whisper at best as horse lands at some random point after the jump) “silence, two, silence, four, mumble, s#%t I lost my stirrup … SIX!!”

Why why why is it so hard for we riders to canter and jump and count at the same time? Although, my standard line when riders say “sorry” for messing up and making a mistake is, “No need to apologise; your imperfections keep me gainfully employed.” I am repeatedly assured that my job security is not in jeopardy. #insertsmilyfacehere

Upon arrival, I sussed out the jump materials and quickly realized that there was not a narrow rail to be found. They had narrow boxes and plenty of gates and other fun toys, but no skinny rails. When I inquired, it was quickly decided that we could cut some of the existing poles. Faster than you can say “Paul Bunyon,” one of the ladies informed us that she had a chainsaw in her truck. 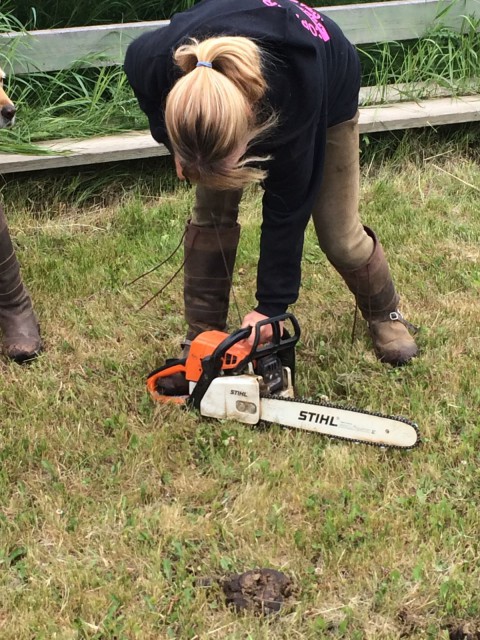 Now, I’m nobody’s helpless girly girl. I can change a tire, know which is the business end of a hammer and a drill, and can fix a fence when needed. But I sure don’t travel with a chainsaw at the ready. Nail file and wine corkscrew, check. Chainsaw, not so much … Welcome to the North, Chelan, welcome to the North! The next thing you know, a chainsaw with a pretty blonde pony-tailed woman attached is producing as many narrow rails as her nibs required. Ask and ye shall receive, apparently.

The schedule was for three days, and the only local cross-country course is older and dilapidated, so unsuitable for use. So the plan was for three days of jumping exercises in the ring. Or so was the original idea …

Jane and I started scheming almost immediately after I got there — surely we could figure something out to give the riders a taste of what cross country is all about? At the end of the first day, I started checking out the nearby props that might somehow become jumps. As mentioned, Smithers is a logging town. As such, they had several logs that were meant for “loggers sports” held at the yearly fall fair. Things like ax throwing and chainsaw cutting competitions are the norm. I bet blondie could give those boys a run for their money come September at the fair!

Giving full meaning to the phrase “it is better to ask forgiveness than permission,” Jane convinced her husband to drive their lovely new blue tractor from the farm into town to the fairgrounds. Really, doesn’t every man alive want to do that — yellow triangle on the back giving you every right to hold up traffic? Husband Mark was stressing about the loggers reaction to the “borrowing” of the logs for jumps — a legitimate concern. Any man who makes his living in the bush cutting giant trees down is not known to be tiny and meek and mild …

So while Mark and Jane were “discussing” the possible fall out (pun intended) from the said jump relocation project (did I mention it was their 28th wedding anniversary that day?), I politely excused myself and set about designing a course of sorts. 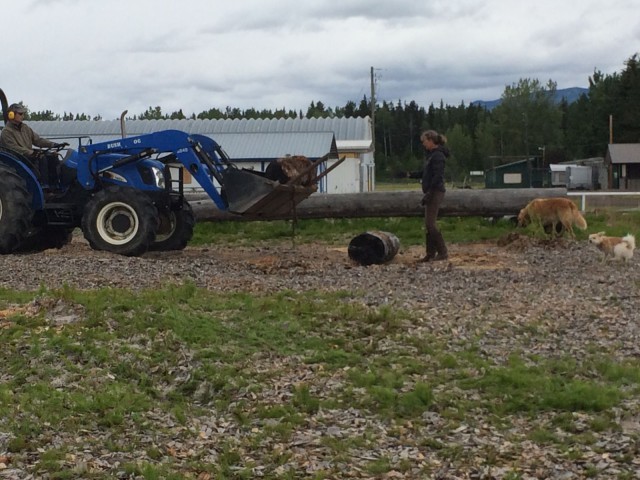 While the fairgrounds is fairly flat, there was a sand hill that I incorporated into the course, and we made a brush jump (more chainsaw required to fell a couple of poplars for brush and natural 8-foot rails). I found some 8-inch diameter, 6-foot narrow logs and railway-tie type materials, and we used standards to put them into the gateways, jumping from ring to ring.

But the real course design inspiration came on Friday when a clinic participant’s 9-year-old daughter was galloping around on her pony like a mad thing, jumping from the grass into the slightly elevated sand dressage ring at E and out at B, which was a bit of a drop fence of sorts. Entering at A is soooo last week! As far as I’m concerned, that is proper dressage practice for a 9 year old. So I put two jumps across there — a perfect five stride!

We made a faux ditch with a tarp in the ring and used boxes as fill and roll tops as jumps out on the grass around the rings. We had a Starter to Novice (Pre-Training) level type thing going on, depending on what height we set the fences at. We even made a start box and counted everyone down.

At the beginning of each group, I asked who had either ridden over a real cross-country course or had been to a “real” event. About half or less of the riders raised their hands. One rider told me he had watched Rolex on YouTube before, but had never been to an event.

We all had a complete blast! I brought my Hit Air vest and had each rider wear it around the course, just in case, as few riders had safety vests. We only had one deployment all day — the result of an overly celebratory equine reaction on landing from a jump.

By the time Sunday evening had rolled around, there were serious plans in the works to build a water jump, a bank and some ditches. And I don’t think it was just the wine talking! I know our little course is responsible for producing some keen riders who want to know more about the sport and build some “real” jumps! I sincerely hope the loggers have a sense of humour.

Thousands of miles from Lexington, Ky., in a small town in Northern BC, on a sunny Sunday, a group of riders couldn’t wipe the smiles of their faces. One post cross-country fist pump and pat on their horse’s neck after another told the story. Thousands of miles from Rolex Kentucky, excitement was created and dreams were born. We have suffered terrible tragedy and loss in our sport recently, and as a community need to cry, rally together, question, seek better ways and go forward.

I love our sport, despite the horrific loss recently. I hope to continue to promote it and inspire others to love it the way I do, even as we require answers and desperately search out ways to keep it as safe as we can.

I can’t wait to go back to Smithers and see what they build. Oh, and if any other little town is looking for an inspiring, fun weekend, I’m available for clinics. I don’t travel with my chainsaw, though! So maybe make sure one locally is topped up with fuel and ready for action. I’ll bring my corkscrew. 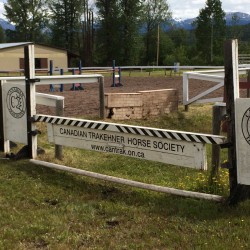 Jumping from ring to ring. Photo by Chelan Kozak. 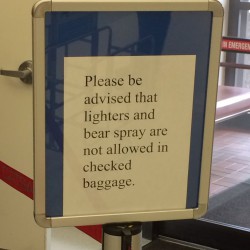 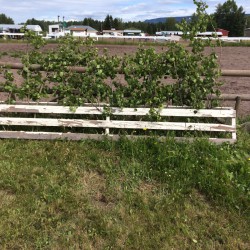 Getting creative! Photo by Chelan Kozak.