Last year, loyal EN reader and former 2011 Blogger Contestant Chesna Klimek kindly sent us a write up and photo gallery of the brand new Advanced course at Aspen Farms.  This past weekend, Aspen Farms hosted another horse trials featuring Beginner Novice through Intermediate, with fabulous prizes for each division.  Chesna was once again in attendance and shared the event report with us.  Thanks to Chesna for writing, and thank you for reading.

At Aspen Farms Horse Trials (AFHT) in Yelm, WA, you won’t just find 300 horses and riders competing in one of the best events in Area VII. There’s much more to discover here, such as a small army of dedicated staff and volunteers, a comprehensive “green” recycling system, and spontaneous performances by the local wildlife… 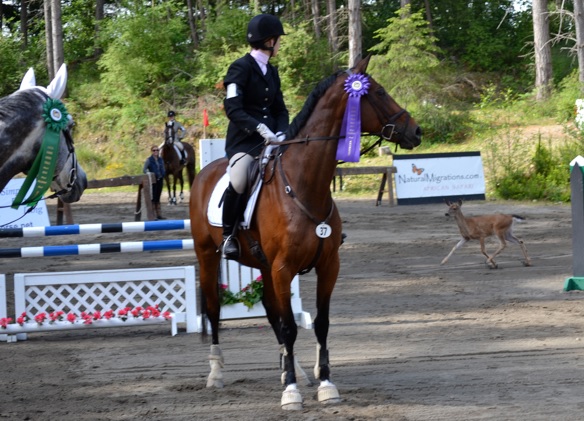 “Jane Doe” joined the Open Prelim victory lap. The gate steward did not have the heart to tell her that she didn’t actually win anything. Photo by Chesna Klimek.

The Open Intermediate winner at AFHT this past weekend was Karen O’Neal riding her OTTB gelding Markus. Karen–winner of AFHT’s inaugural Advanced division last fall on her mare True Avenue–edged past Maya Black to take the lead after two clear jumping rounds inside the time. Karen is excited about her future with Markus, and for good reason. Markus came off the track as a 7-year-old, and now as an 11-year-old already has successful placings at Intermediate and an Advanced run under his belt. Karen says “his dressage has come around. I think he’s the real deal; he’s going to take me far I think. It feels like nothing out there for him.” Karen plans to qualify Markus for the three-star at Galway at the end of the year; Area VII will be cheering for her. 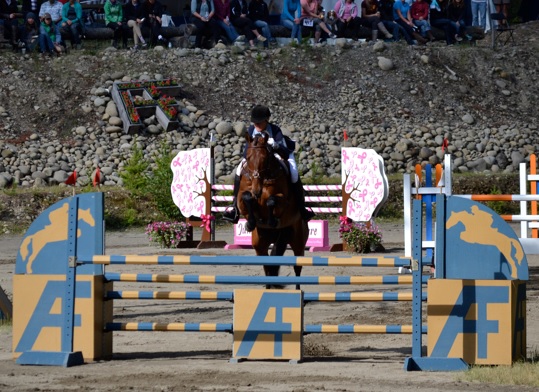 At the other end of the levels spectrum, Pamela Sturbaum riding her 14.3h gelding Police Car took the win in the Zeit Capital Open Beginner Novice. Police Car, known as “PC” by his friends, showed everyone that you’re never too old to be a winner–he turned 24 this year and has the grey hair to prove it. “I’m on a seasoned horse,” Pam said fondly; “Though I’ve only been doing this a year, he knows the ropes!” PC looked in top form this weekend and definitely stood out as one of the fan favorites. AFHT offered four Beginner Novice divisions in total as well as Zeit Capital classes in Open Beginner Novice, Novice, and Training with cash prizes through twelfth place. 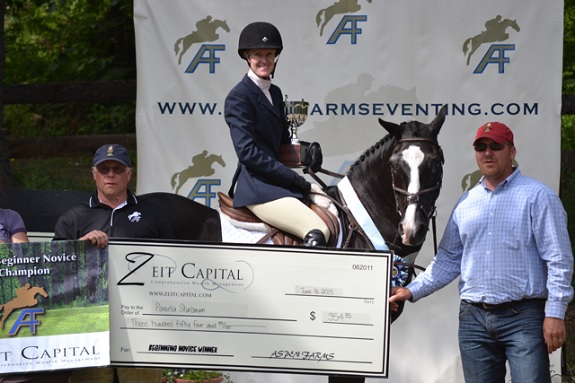 PC wasn’t the only inspirational story at AFHT. Karen Laidley, a veterinarian from Redmond, OR, delivered seemingly effortless performances on Coming to Fruition to lead the Zeit Capital Open Novice division from start to finish. Just over a year ago, a riding accident sidelined Karen from competition. Now she’s back on the eventing scene having been cleared by her doctor to start jumping again a mere six weeks ago. Karen’s positive attitude is contagious: “Everything happens for a reason. The whole experience gave me the opportunity to meet saddle-fit expert Jochen Schleese,” which she credits to significant improvements in her and her horses’ happiness and performance. Speaking about her horse, Karen said, “I’m so proud of him. The way he has handled everything has been just awesome.” Karen’s comeback win earned her $462 from Zeit Capital and a $500 Toklat prize pack, among other goodies. 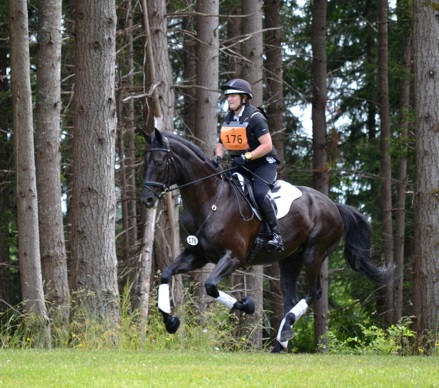 Speaking of prizes… If you like fabulous prizes (and really, who doesn’t?), then AFHT is the place to compete. According to show organizer Jonathan Elliott, “Our sponsors are great—really great. It was a little over $21,000 in cash and prizes at this show.” To get an idea of what that means for riders, Leigh Mesher, winner of the Zeit Capital Open Training division and the class with the most entrants, was awarded a check for $511.50 from Zeit Capital, a $500 Gallops Saddlery gift certificate, an engraved leather halter, a photo from Action Taken Photography, a Deco Pony stall guard, an Aspen Farms trophy, a beautiful neck sash for her horse Rafflasia Z, and a trip to Disneyland. (Ok, maybe not that last part).

From the prizes to the courses to the Saturday night bonfire party, AFHT goes above and beyond to create a top-notch event here in Washington State. You can’t be at this show and not feel excited about our sport and the grassroots community that keeps it alive: organizers, volunteers, competitors, and spectators. So many folks had positive things to say about their experiences at AFHT, noting their appreciation for everything from the craftsmanship of the jump design, to the efficient show operations, to the dedication of the Elliotts. 10-year-old Kayla Dumler, the winner in Junior Beginner Novice and a first-time competitor at AFHT, summed up the show in three simple words: “I loved it!” 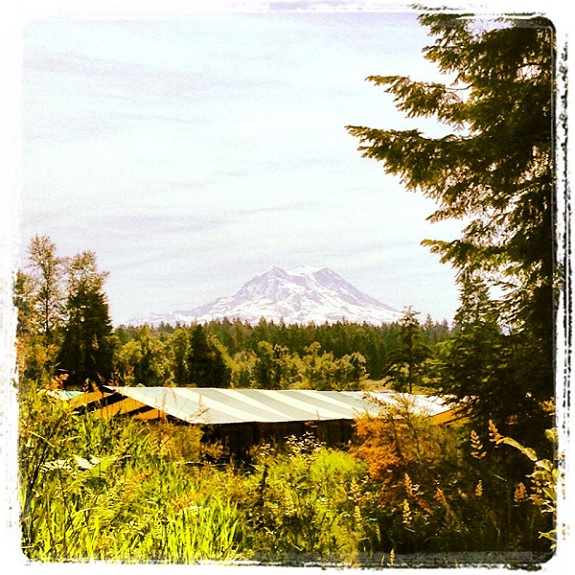 The next AFHT on September 6-8, 2013 will feature the Tin Men Supply Advanced division, one of the classes in this year’s Adequan Gold Cup and Pro Tour Series. This level of participation in the national eventing scene will be a milestone for eventing in the Pacific Northwest, and there’s no better place than Aspen Farms to do it.

–
Want to see more photos, video, and news from the June AFHT? Check out Aspen Farms Horse Trials on Facebook for more: https://www.facebook.com/AspenFarmsHorseTrials

–
[Final results for the June AFHT] 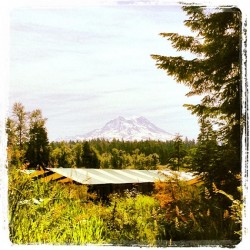 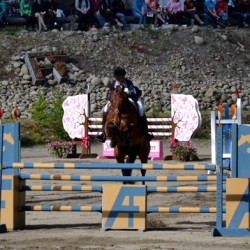 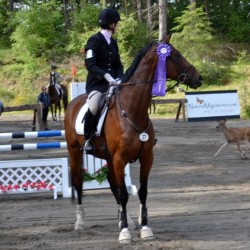 “Jane Doe” joined the Open Prelim victory lap. The gate steward did not have the heart to tell her that she didn’t actually win anything. Photo by Chesna Klimek. 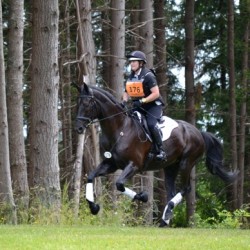 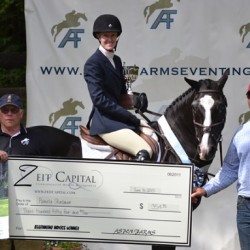 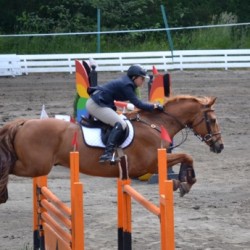 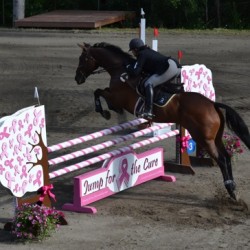 Jump for the Cure fence sponsored by Desiree Bruce. Photo by Chesna Klimek. 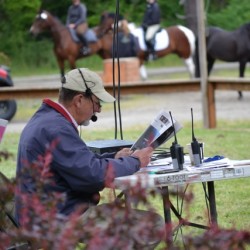 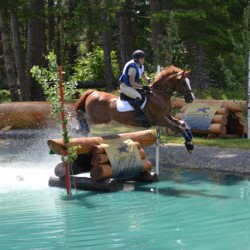 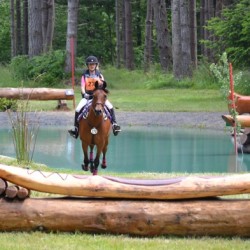 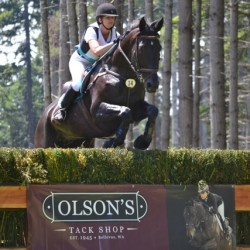 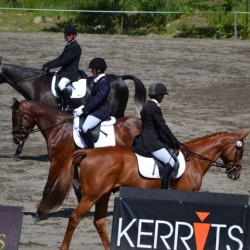 Kerrits was one of many sponsors. Photo by Chesna Klimek. 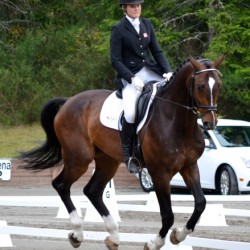