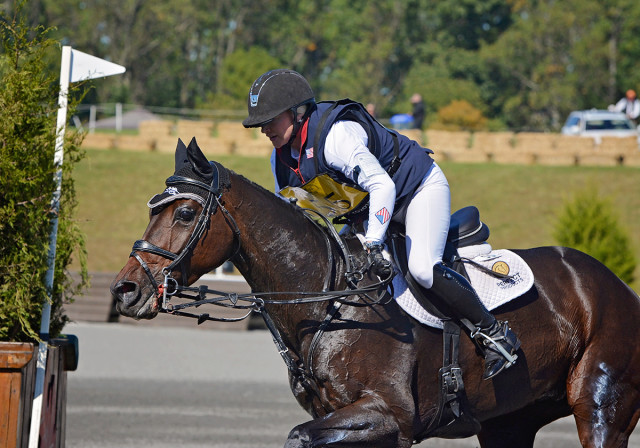 Marilyn Little and RF Scandalous at fence 17 on the CCI3* course. Photo by Jenni Autry.

As we reported earlier today, Christian Landolt, president of the Fair Hill International ground jury, confirmed in a press conference following cross country that officials received reports of blood in RF Scandalous’ mouth at fence 20 on the CCI3* course.

The ground jury confirmed that blood was visible at fence 22. Technical delegates stationed at fences 23 and 24 also confirmed that “yes, there was red, but there was nothing running or gushing,” Christian said.

Marilyn Little and RF Scandalous completed the course clear with 4.8 time penalties to sit in second place on a score of 46.3. Christian said officials chose not to stop Marilyn and RF Scandalous on course to evaluate the blood because they were five fences from completing the course when the ground jury confirmed the blood.

“With barely a minute of cross country to go, the easiest was just to let her finish and get the vet to look at her at the end, because we would have actually had to have a vet involved anyway. It was easier for everybody for her to finish if there was no interruption of her cross country,” Christian said.

“At the finish the vet was informed there might have been some blood, and on inspection she saw nothing. There was no open wound and no blood or anything. That’s the information we were given, so there isn’t really a case. Clearly the mare bit her tongue or something like that, but … the vet couldn’t find anything, any fresh injury or any fresh blood on the horse at the finish.”

FEI rule 526.4 Blood on Horses states as follows: “Blood on Horses may be an indication of abuse of the Horse and must be reviewed case by case by the Ground Jury. In minor cases of blood in the mouth, such as where a Horse appears to have bitten its tongue or lip, or minor bleeding on limbs, after investigation the Ground Jury may authorize the Athlete to continue.”

Marilyn also addressed the visible blood in the press conference and said she did not see any blood in RF Scandalous’ mouth when she dismounted after completing the course. “When I got off the horse, the vets were there and were taking her temperature, and there wasn’t anything evident at that time,” she said.

Marilyn also explained RF Scandalous’ bit in detail, clarifying that the bit she competed in today is a “smooth straight-bar pelham, no joint, no hinge, just a plain leather noseband. … It has a snaffle rein because I just happen to ride the first half of the course on the snaffle rein, and then in the CCIs I use a bit more of it as well, and she seems to like it. There’s nothing on it that can cut her; it’s quite wide and smooth with no hinges and no joints.”

“If she bit her tongue, it could have happened at any time. I can’t help that, but if (the ground jury) want I can look into ways to keep that from happening in the future. It didn’t seem to alter her performance, and I hope it doesn’t happen again.”

In responding to a question about when the ground jury would make the decision to pull up a horse on cross country due to visible blood, Christian said the officials consider: “When does (the blood) become red? And also, do you have blood on the body? Which means that it would have been bleeding for quite some time and therefore would be dripping.”