Australia’s Christopher Burton held on to his overnight lead after today’s cross country at the Saumur Complet CCI3* in France. He and the 9-year-old Hanoverian Santano II, owned by the Black Run Syndicate, scored a 40.2 in dressage yesterday to top the field of 55 starters in the gelding’s first CCI3* attempt. Today, they widened their lead with a clear round and just 1.2 time penalties to add.

Check out their winning dressage test below, accompanied by the “Imperial March.”

Santano started his FEI eventing career with Chris in 2014. After an unfortunate elimination at the gelding’s first one-star, the pair won the CCI* at Hartpury in 2014 and then finished no lower than second in four two-star appearances in 2015. At the Castleacre Insurance Brokers CCI2* at Camphire International Horse Trials last July, they won with a record breaking final score.

Santano moved up to the three-star level this year, completing the Burnham Market CIC3* in April and finishing 14th at Belton two weeks later. Other than an uncharacteristic show jump round at Burnham market, Santano is a consistently careful show jumper. They’ll have one rail in hand for tomorrow’s show jumping over second place Frenchman Thomas Carlile and the 8-year-old Anglo-Arabian stallion Upsilon, who is also having a stellar go at his first CCI3*, adding 4.4 time penalties to move up from third after dressage.

Thomas also sits fourth after cross country with the 10-year-old Selle Français Sirocco Du Gers, having moved up from fifth after dressage with a clear cross country round and 7.2 time penalties. Less than a point ahead of him in third is countryman Astier Nicolas and Carole Broad’s 12-year-old gelding Molakai.

There were no double-clear rounds this year in the NAF Superflex CCI3* division, though several came close, and a fast round almost guaranteed a big move up the leaderboard. Oliver Townend (GBR) and ODT Ghareeb moved from 23rd to sixth with a clear round and 2.0 time penalties to add. Similarly, Maxime Livio (FRA) moved from 22nd to seventh with Opium De Verrieres. 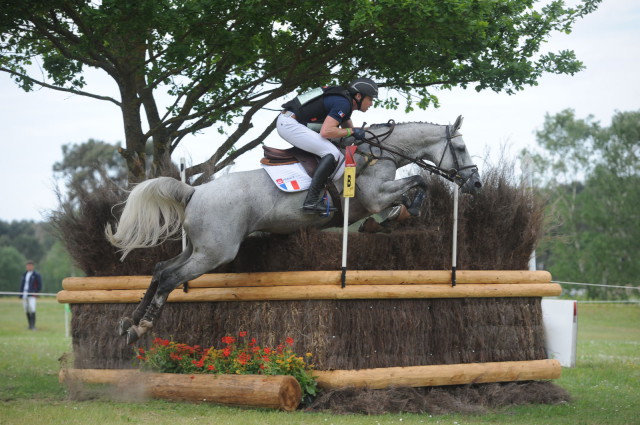 Forty-three combinations will go on to the final horse inspection tomorrow. You can tune in to watch the show jumping live stream at this link. The CCI3* starts jumping at 8:00 a.m. EST.

The French news organization L’Eperon was on site filming and catching interviews with the riders. Unless you’re fluent in French the interviews won’t do you much good, but you can still get a glimpse of some cross country action in this video. 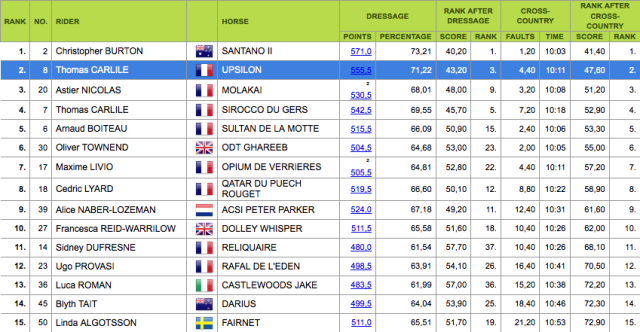