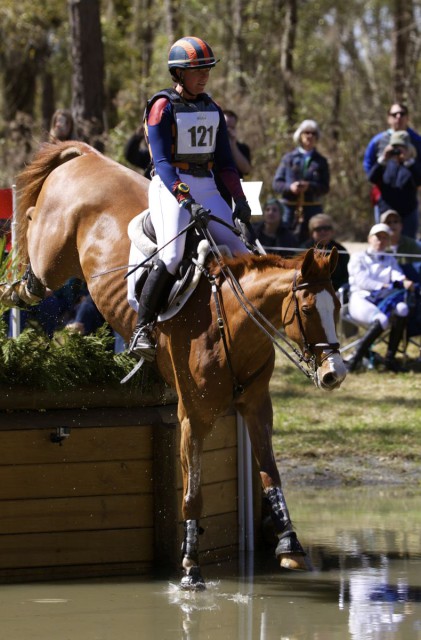 As always, cross country day at Red Hills turned the leaderboard upside down, and the riders who mastered the twists and turns of Hugh Lochore’s notoriously tricky track joined us in a press conference after the dust settled to rehash the day.

Court and Kylie Ramsay’s Czechmate stepped up to the plate today in his first attempt at the CIC3* level and is enjoying the top spot in the division with Lauren Kieffer after a clear trip and 14.4 time penalties. While the horse has historically been slower in this phase, he wasn’t far off the pace today, which Lauren attributed to switching his bit to a pelham.

“He was really mature around the course,” she said. “I changed his bit, and he was way more rideable in it. He cruised around. I took some longer approaches in the combinations to make sure he got a chance to see everything, but he was great the whole way around.” 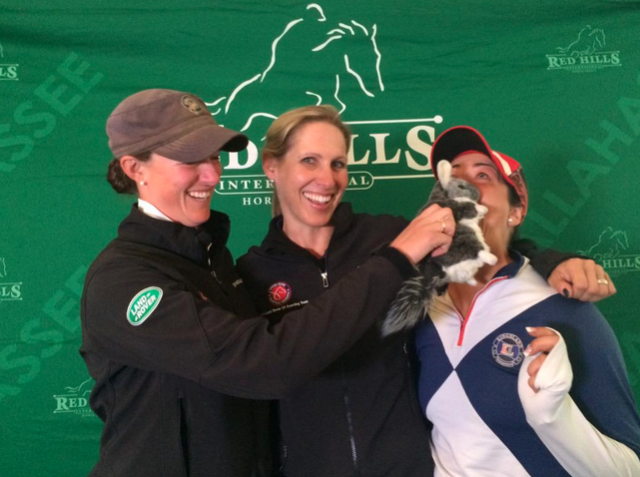 Chinch has started a new Red Hills tradition of smooching the CIC3* leaders.

Lauren has produced the horse, a 9-year-old Czech Warmblood, from the Novice level, and the Ramsays have owned the horse ever since, having loved what they saw in the horse and realized his quality and potential at such a young age.

“It’s great to have owners like that that go in it for the long haul from the beginning,” she said. “It’s always great to be with the horses for that long. At the end of the day, the ones you’ve had from Novice level you know inside out.”

Czechy will now aim for the the three-star at Jersey Fresh with the goal of making the U.S. Pan American Games team, and Lauren said she thinks his prowess in the show jumping in particular makes him a strong candidate for Toronto.

Lauren also enjoyed a great day with Team Rebecca’s Veronica, who is leading the Advanced division on a score of 41.4. “She was really civilized and mature for this early in the year,” Lauren said. “She’s got so much experience at this point.”

If all goes according to plan, Lauren is planning on a return trip to Rolex with Veronica in April, where they very nearly stole the win from William Fox-Pitt. Don’t you all agree Willy has enough Rolex watches at this point? It’s time for an American to take home some hardware! 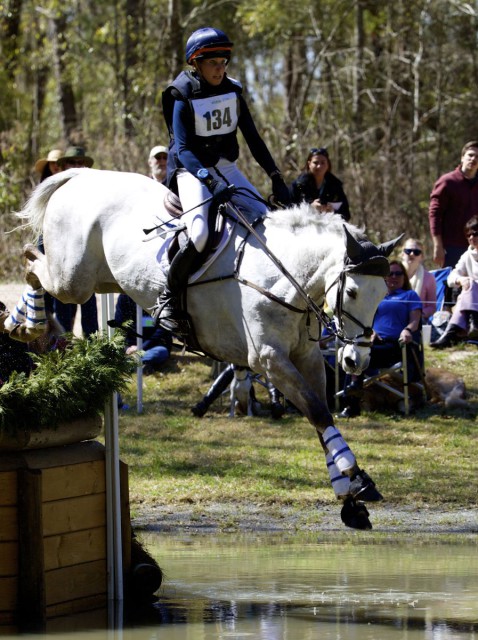 Liz Halliday-Sharp had a mixed bag at Red Hills today, though she said she’s still looking ahead to Kentucky despite the blip with overnight leader Fernhill By Night, who glanced off 8b at the Osprey Offsets after she said “Blackie” never really locked on to the second fence. She retired after jumping the corners at fence 9 and will re-route to Carolina International CIC3*.

She had a much better trip on Deborah Halliday’s HHS Cooley, who is sitting just .7 time penalties behind Czechmate in second place in the three-star. Cooley’s breastplate snapped after fence 5, and Liz said she slowed down in one of the galloping stretches to try to figure out what had happened, which cost her precious seconds.

“He’s a real fighter and a real competitor,” she said. “He wants to jump clear no matter what is happening. … He’s a big, galloping horse, and I think he struggled a little bit through the trees.” 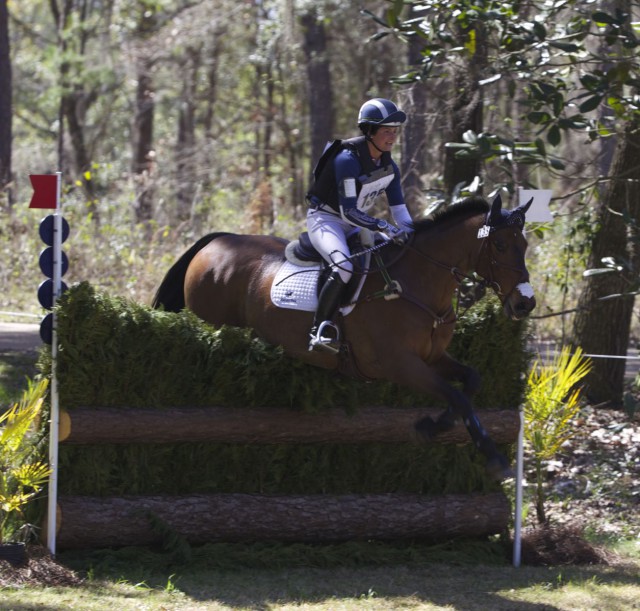 Jennie Brannigan and Cambalda are familiar faces at the top of major leaderboards, and they’re sitting in third place in the CIC3* on 58.4 — though she said their day nearly ended at the first water complex when “Ping” left a leg at the skinny soccer ball at the D element.

“At this point, I’ve had the horse for a long time. I’ve produced him. I know him inside and out. I actually didn’t feel like I flowed that well today, but this place can be a little tough for that,” she said.

“He’s a good boy. I have to ride him pretty strongly because he’s a bit behind the leg, and then sometimes he shakes his head and doesn’t want to come back. But at the end of the day, he’s my best friend. I’ve had him for eight years. It’s fun to have him, and I’m lucky to still get to ride my old boy.”

Jennie confirmed she and Ping plan to return to Kentucky this year, where the third time will hopefully be the charm after their last two attempts at the event didn’t go their way. “Last year, the horse genuinely did jump around Kentucky, so I hope I can do that again,” she said. 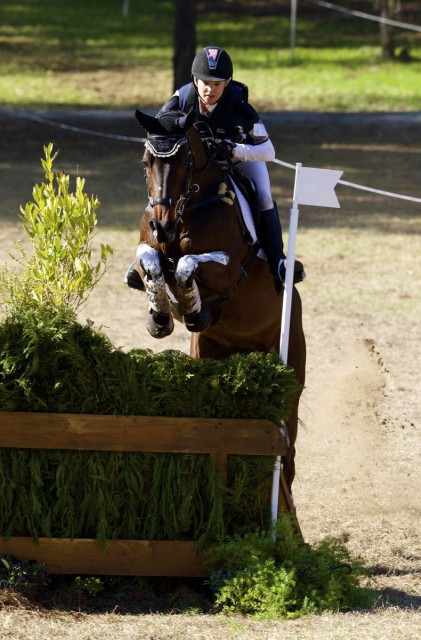 The stars are finally starting to align for Marilyn Little and RF Scandalous, owned by Raylyn Farms and Phoebe and Michael Manders, who have been sorting through some kinks in their partnership ever since the mare was imported from Germany last summer. They currently lead the CIC2* on a score of 47.9 after jumping clear with 14 time penalties.

“Scandalous was a real dream around there. Right from the very beginning in the warm up area, she was very confident. That’s really where I’d like to see her right now at this point in the partnership — that she gets nervous because she wants to do well rather than being nervous because she’s nervous,” Marilyn said. “With a horse you want to take to the upper levels, that’s a very fine line, and I’m starting to see that from her, so it’s a cool time. 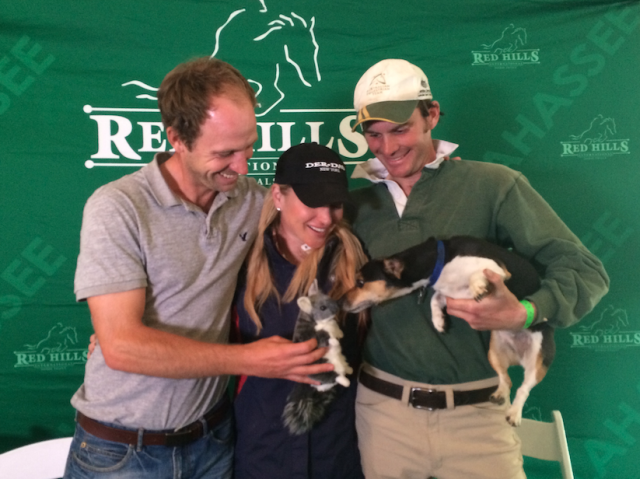 Marilyn Little got sandwiched in a Chinch-Snoopy love fest during the press conference.

She also has RF Tabasco high up on the leaderboard in fifth place on 55.7 after jumping clear with 14.4 time penalties, despite pulling a shoe about halfway around the course. After being out of the game for the past year and a half, Marilyn said she hopes to see the 15-year-old Trakehner gelding owned by Team Tabasco aim for Rolex or the Pan Ams team.

“As with any older horse, you have to see what they want to do. He feels like he has a lot more in him,” she said. “I would love to say that I hope to enter Rolex with him, but I would also be really thrilled to have him as a Pan Ams candidate. I think he’d be amazing on the flat, and he has an amazing record at the three-star level.” 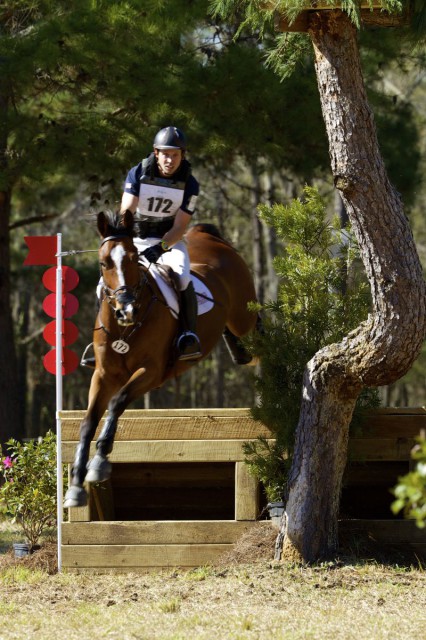 Tik Maynard and Dutch Times are sitting less than a rail behind Marilyn and RF Scandalous on a score of 51.5 after delivering the fastest time in the CIC2* division with just 2 time penalties. Having ridden the horse since he was 3, Tik said their solid partnership makes a big difference on tricky courses like this.

“We know each other really well, and I know how close I can cut turns on him and where he’s going to leave from … I can get in the back seat and let him have his head and neck, and he’s going to go from anywhere,” Tik said.

The horse, a 7-year-old Dutch gelding owned by Christina Aharoni, is still very new to the two-star level, but he stepped up on a day when the course caught out quite a few seasoned pairs. “We went just about as fast as we’ve gone,” Tik said. “He’s still relatively new to this level, but it was a nice chance for us to open up the gallop and see what he can do. We both had a good time today.” 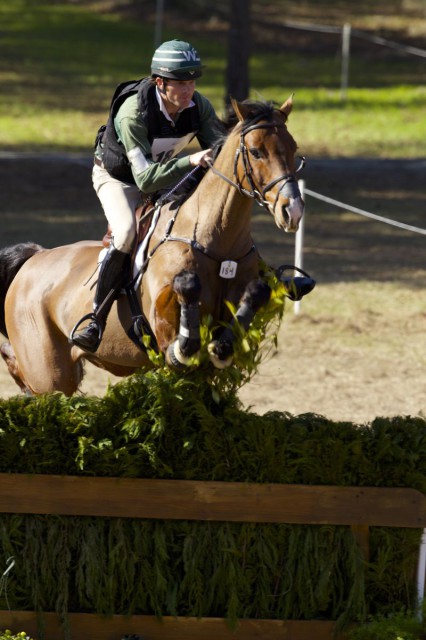 Ryan Wood and Sarah Hughes’ Alcatraz, a 10-year-old Dutch gelding, are enjoying the third spot in the big CIC2* class, also sitting less than a rail out of the lead on a score of 51.7 with 2.8 time penalties on cross country. Phillip Dutton produced the horse, and this is his third event back after spending some time breaking in his dancing shoes doing dressage for the past few years.

“I thought he’d maybe be a bit slower than he was, but the great thing about him is he doesn’t get strong; he’s on a loose rein the whole way,” Ryan said. “You don’t have to fight with him before the jump. You can just keep going, so you save a lot of time.” 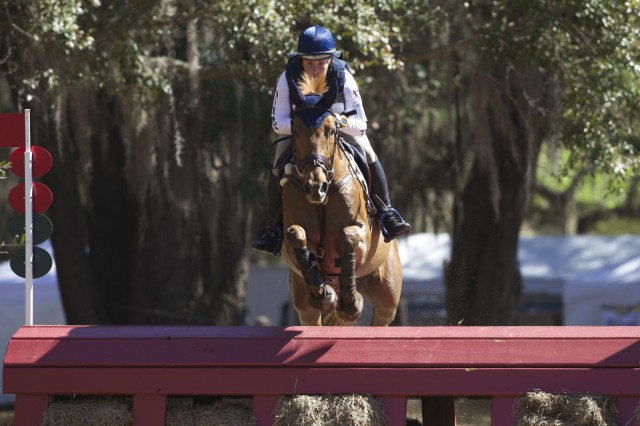 Hannah Sue Burnett and Jitter Bug on a roll

Hannah Sue Burnett’s weekend with her new ride Jitter Bug, owned by Jacqueline Mars and Sherry Nemmers, keeps getting better and better, as she jumped clear with just 1 second over the optimum time to hold her overnight lead in the CIC* on a score of 38.2.

“It’s a new partnership, so things haven’t gone perfectly up until this point, and I was really excited that she went out of the box and was really honest,” Hannah said. “I was basically patting her the whole way around, which is how I like them to go. And she was looking for the jumps and really forward.”

Hannah said the 9-year-old Rheinland Pfalz-Saar mare is the total package, with the movement, jump, gallop and breeding to be a serious contender at the upper levels. “She hasn’t had a perfect record, and she’s a bit quirky, which I actually like. All the ones I’ve had success with in the past have had a thing about them. I don’t mind that,” she said.

“It’s going to be a partnership. She’s a chestnut mare, so it’s going to take a bit of time, I think, to be perfect, but hopefully we’ll be able to trust each other and keep moving on … She’s just got opinions of her own sometimes, which is cool. She’s a lady, so she’s a bit sassy.” 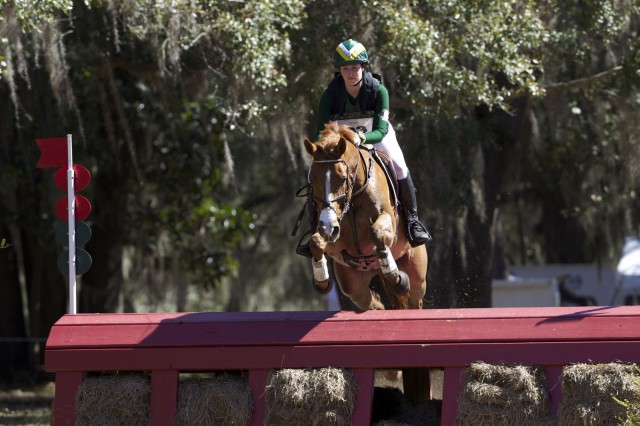 Alexa Ehlers and Juicy Couture scooted up to the top of the leaderboard in the CIC* thanks to delivering one of the double-clear trips in the division to sit in second place on 42.9. A 20-year-old nursing major at the University of Kentucky, Alexa has been training with Allie Knowles for the last few years and recently took over the ride on the mare, a 14-year-old Dutch/Thoroughbred owned by Allie.

“I’ve been trying to figure her out because she’s a chestnut mare as well (at which point Hannah said, ‘Red heads unite!’), so it’s been interesting,” Alexa said. “I’m really stoked. I feel like I’ve finally kind of figured everything out. She’s definitely different than anything I’ve ever ridden before, so I’m learning a lot, which is awesome. 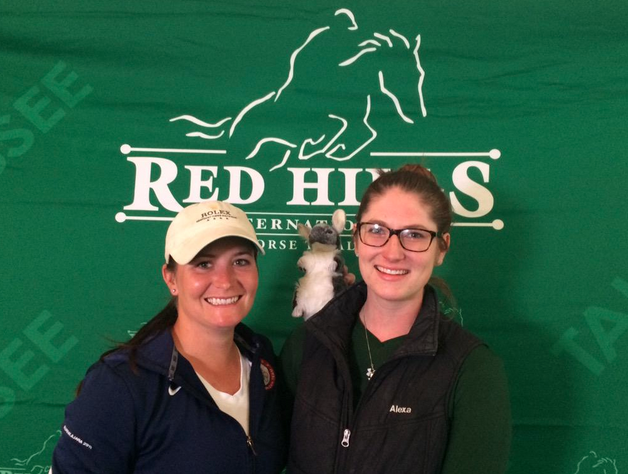 Our thoughts continue to be with Kyle Carter and the Five Ring team after Conahy’s Courage was euthanized following a rotational fall on CIC3* cross country yesterday. The horse, a 10-year-old Irish Sport Horse gelding owned by Imogen De Lavis, suffered a broken leg during the fall at fence 12a, the first hobbit house in The Shire. Kyle was uninjured.

What’s Up Media’s broadcast with cross country highlights and a live stream of the top 10 in the CIC3* show jumping will start at 11 a.m. EST, so be sure to tune in to watch right here on EN or at this link. Stay tuned for much more from Red Hills.